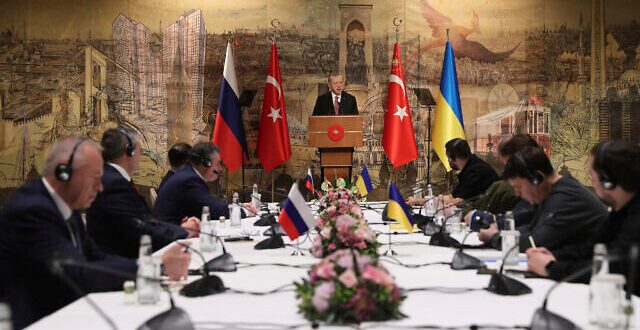 Russian and Ukrainian delegations are in Istanbul for the first face-to-face talks in more than two weeks after President Volodymyr Zelenskiy said Ukraine was prepared to declare its neutrality and consider a compromise on contested areas in the country’s east to secure peace.

Earlier talks between the sides, both in-person and in videoconference calls, failed to make progress.

Zelenskiy said Ukraine’s priorities at the talks will be “sovereignty and territorial integrity.”

Ukraine will be “looking for peace, really, without delay,” he said in his nightly address late on March 27. Repeating earlier statements, Zelenskiy said the offer of security guarantees would include keeping Ukraine nuclear-free.

He told the reporters that the issue of neutrality — and agreeing to stay out of NATO — should be put to Ukrainian voters in a referendum after Russian troops withdraw. He said a vote could take place within a few months of the troops leaving.

Ukrainian Foreign Minister Dmytro Kuleba said a cease-fire was the most his country could hope for from the talks. “We are not trading people, land, or sovereignty,” Kuleba said.

Turkish President Recep Tayyip Erdogan agreed to host the talks in a call with Russian President Vladimir Putin on March 27, and called for a cease-fire and better humanitarian conditions, his office said.

In a televised address following a cabinet meeting on March 28, the Turkish leader said that separate telephone calls he had been holding with Zelenskiy and Putin were progressing in a “positive direction.” He did not elaborate.

Erdogan also said he would meet “briefly” with the Ukrainian and Russian delegations ahead of their talks on March 29.

More than four weeks into its unprovoked invasion, Russia has failed to seize any major Ukrainian city and signaled on March 25 it was scaling back its ambitions to focus on securing the Donbas region, where Moscow-backed separatists have been fighting the Ukrainian Army for the past eight years.

The General Staff of the Ukrainian military said in its latest update on March 29 that Russian forces keep launching missile strikes on residential neighborhoods across the country, focusing on targeting fuel-storage compartments in an effort to “complicate logistics” and “create conditions for a humanitarian crisis.”

Fuel depots have reportedly been hit over the past few days in cities such as Kyiv, Lviv, Rivne, Zhytomyr, and Lutsk.

Ukrainian officials also said on March 29 that Russian forces carried out a missile strike on the town of Lyubotyn in the northeast Kharkiv region the previous day, flattening several houses and wounding several people.

“Russian troops continue unsuccessful attempts to take positions from which they could attack or surround Kyiv,” the statement said.

A senior U.S. defense official, who spoke to reporters on condition of anonymity, said Russian forces largely remained in defensive positions near Kyiv and were making little forward progress elsewhere in the country.

The mayor of Irpin, a northwestern Kyiv suburb that has been the site some of the heaviest fighting near the capital, said the city had been “liberated” from Russian troops. Interior Minister Denys Monastyrskiy later made the same comment in televised remarks.

British military intelligence said on March 28 that Russia had gained more ground in the south in the vicinity of Mariupol as it fights to capture the port.

Vadym Boychenko, the mayor of Mariupol, said the city on the shores of the Sea of Azov was on the verge of a humanitarian catastrophe and must be completely evacuated.

He said about 160,000 civilians were trapped in the city without power.

Boychenko also said almost 5,000 people had died in the city since Russia launched its invasion. The figure could not be independently verified.

Post Views: 79
Previous About 240 additional troops and six Navy jets deploying to Germany as war in Ukraine drags on
Next In Peace Talks, Russian Negotiator Commits to Reducing Military Activity Near Kyiv ‘By Multiples’