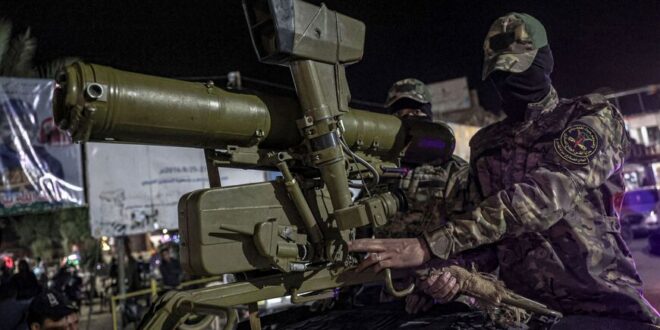 Hamas and Islamic Jihad are coordinating policies and activities, stepping up attacks in the West Bank while trying to avoid direct confrontation in Gaza.

Hamas has made concerted efforts to contain the anger of the Islamic Jihad movement in the Gaza Strip, and to prevent it from engaging in a new round of fighting with Israel, in response to the latter’s assassination of three Islamic Jihad members.

Israeli special forces opened fire at the three Islamic Jihad operatives in Jenin in the northern West Bank on April 2, shooting dozens of bullets at their vehicle at the Araba roundabout. Four Israeli soldiers were wounded during the clashes. The Israeli army consequently went on alert and sent new reinforcements along the border with the Gaza Strip.

A senior Hamas source who spoke to Al-Monitor on condition of anonymity said that his movement does not wish to see any resistance faction carry out military activities against Israel from the Gaza Strip without consensus from the joint operations room. Those 12 factions include Hamas, the Popular Front for the Liberation of Palestine (PFLP), and the Democratic Front for the Liberation of Palestine (DFLP).

Hamas wants to unite and coordinate any political and military position in the face of the Israeli army in clashes and wars, the source continued.

There has been a recent uptick in Palestinian attacks against Israeli targets in the West Bank and inside Israel, with shootings targeting Israeli forces taking place almost daily. Most recently on April 5, four separate shootings targeting Israeli forces and settlements were carried out in West Bank cities. Meanwhile 11 Israelis were killed in attacks at the hands of Palestinians inside Israel between March 15 and 29.

Firing rockets from the Gaza Strip toward Israel would mean “a new, currently undesirable military confrontation with Israel,” the Hamas source said.

“Hamas seeks calm in Gaza, to give the reconstruction efforts a chance and increase the number of Gaza workers inside Israel,” he added. “But if Israel commits a folly in the Gaza Strip, we’ll have to bid the truce goodbye.”

On April 3, Ismail Haniyeh, head of Hamas’ politburo, had a phone call with Ziad al-Nakhala, Secretary-General of the Islamic Jihad, during which he offered his condolences for the slain operatives in Jenin, stressing the need to strengthen coordination at the political level and on the ground between the two movements.

On the same day, resistance factions in Gaza, including Hamas and the Islamic Jihad, issued a joint statement that “The Israeli occupation policy will not succeed in isolating any part of our people from the other.”

Leader of the Islamic Jihad movement Ahmed al-Mudallal told Al-Monitor that “the continuation of Israel’s crimes against our people and the assassination of the resistance fighters in the West Bank will lead to battles against occupation forces in all arenas, whether in Gaza, the West Bank or the occupied interior [Israel].”

The joint operations room is maintaining the calm in Gaza, “but if we feel that this calm will lead to Israel’s singling out the West Bank or the Arab Palestinians inside Israel, the truce will come to an end,” Mudallal said. “If the occupation [forces] continue to storm Jenin and assassinate the resistance fighters there, then let them prepare for the worst from our resistance.”

Following the assassinations in Jenin, Al-Quds Brigades in the central governorate of the Gaza Strip organized a military parade on April 3 to display its combat capabilities. The brigades’ fighters brandished pictures of the three slain operatives.

“Organizing this parade demonstrates that the Islamic Jihad movement will not respond at present to the assassination of its operatives in Jenin,” Talal Okal, a writer and political analyst in the local Al-Ayyam newspaper, told Al-Monitor. “It instead contented itself with passing warning messages to Israel.”

Okal added, “It is clear that the resistance factions, especially the Hamas and Islamic Jihad movements, are currently focusing on escalating their military activities against Israel in the West Bank, as we are witnessing almost daily shootings and clashes with the Israeli army.”

Ahmed Rafiq Awad, a professor of media and political sciences at Al-Quds Univeristy, told Al-Monitor, “It is true that the Islamic Jihad wishes to respond strongly to the assassination of its members, but it is unlikely that the retaliation would be carried out from the Gaza Strip. Operations will be rather concentrated in the West Bank.”

Awad believes coordination between Hamas and the rest of the factions through the joint operations room prevents any faction from unilaterally venturing into a war against Israel.

“This is different from what is happening in the confrontations with Israel in the West Bank, where any faction can carry out any military activity against Israeli targets without the need to coordinate with any other factions,” he added.