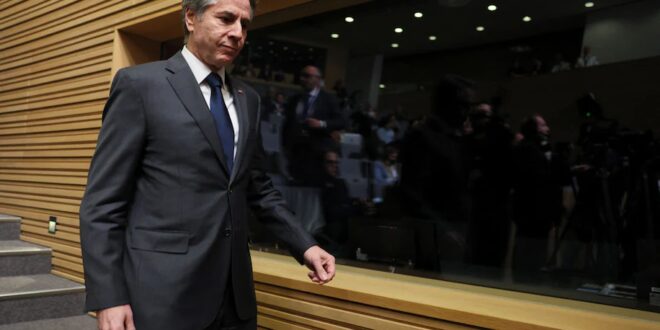 The Biden administration plans to reject an Iranian demand that the United States lift its designation of the Islamic Revolutionary Guard Corps as a terrorist organization as a condition for renewing the 2015 nuclear agreement — putting completion of the deal in jeopardy.

A senior administration official told me that President Biden doesn’t intend to concede on the terrorist designation, even though this may be a dealbreaker: “The onus is on Iran as to whether we have a nuclear deal. The president will stick to core principles. The Iranians know our views.”

The official’s comments amplify a statement earlier this week by Secretary of State Antony Blinken. Asked during an interview with NBC News whether the IRGC is a terrorist organization, Blinken answered, “So, they are.” He continued: “I’m not overly optimistic at the prospects of actually getting [the nuclear] agreement to conclusion.”

Iran’s demand that the United States remove the IRGC from its “foreign terrorist organization,” or FTO, list has emerged as the main obstacle to reviving the 2015 nuclear pact. European countries have urged the United States to find a compromise formula that will save the deal, whose basic provisions have been negotiated in Vienna over the past year.

The administration isn’t walking away from negotiations with Iran, and it’s possible some acceptable formula could be negotiated with the help of European allies that would satisfy Biden’s desire not to reward an organization that has killed thousands around the world, including hundreds of Americans.

But Biden apparently doesn’t want to budge — nor should he. This might largely be a symbolic issue, but the IRGC needs to earn its way off the list.

The president is said to view the IRGC question as separate from the nuclear talks, even though Iran insists they are related. Biden and other U.S. officials are adamant because they believe the IRGC’s activities, through its network of proxies, directly affect the safety of U.S. personnel and its partners in the region.

The latest example of suspected Iranian-backed activity was an artillery attack early Thursday on a base in eastern Syria known as Green Village and used by U.S. troops there. The two rounds injured four U.S. servicemembers, who the Pentagon said are being treated for minor wounds and possible traumatic brain injuries. The Pentagon has not said whether the United States will retaliate.

Appearing Thursday before the Senate Armed Services Committee, Army Gen. Mark A. Milley, the chairman of the Joint Chiefs of Staff, reinforced the assessment of the IRGC. “In my personal opinion, I believe the IRGC Quds Force to be a terrorist organization, and I do not support them being de-listed,” Milley told the panel.

Proponents of removing the IRGC from the list argue that other sanctions against the group will remain, even if the FTO designation is withdrawn, and that it doesn’t make sense to describe as “terrorist” an organization so large that it touches many parts of Iran’s economy and government. Europeans have suggested a compromise in which Iran would pledge to de-escalate regional tensions and stop attacking Americans.

But the IRGC issue can’t just be a bargaining chip. If Iran is serious about curbing the violence and intimidation the IRGC has spread throughout the region, then it needs to say so clearly and emphatically — not as a side deal to a nuclear pact.

The issue of the IRGC’s designation as a terrorist group has been closely watched by Israel and Arab Gulf nations such as Saudi Arabia and the United Arab Emirates. They see it as a test of the Biden administration’s credibility and commitment in the Middle East. The Trump State Department formally designated the IRGC as a foreign terrorist organization in 2019 despite arguments from some senior officials in the U.S. military that the step was unnecessary and potentially counterproductive. However, once the designation was imposed, congressional Republicans and Democrats alike have argued that it shouldn’t be removed without meaningful improvements in the IRGC’s behavior. Removing the designation and related sanctions would further strain relations with the Saudis and Emiratis, who have grumbled about the United States’ unreliability.

The deeper question is whether the impasse over the IRGC label will derail what had appeared to be a successful effort to reimpose terms of the 2015 nuclear deal in exchange for lifting U.S. economic sanctions against Iran. Administration officials concede that the draft deal is far from ideal; some of its provisions would expire soon, and it would leave Iran perilously close to having a “breakout” stockpile of enriched uranium sufficient for a nuclear weapon.

But the administration argues that Iran was able to advance its program, enriching uranium to the 60 percent level that approaches weapons grade, only because the Trump administration decided to withdraw from the deal in 2018 — effectively voiding its limits. President Donald Trump’s decision is viewed by many national security analysts, including some leading security officials in Israel, as a costly mistake.

The Israeli government views the revived agreement that has been patched together in Vienna as a bad deal, because some of its provisions will expire so quickly and because it could provide a pathway for Iran to eventually have nuclear weapons capability. But senior Israeli officials also recognize the danger of having no deal, which would allow the Iranians to race even faster toward bomb-making capability.

Some analysts fear that if Iran isn’t constrained by a new pact, it would increase enrichment to the weapons-grade 90 percent level. Officials said that Tehran had considered taking this step after Trump voided the deal but backed away after European countries warned Iran privately that such a move would trigger new sanctions.

At the heart of the IRGC issue is Iran’s destabilizing role in the region, through a network of proxies the IRGC oversees. The Yemen war is one example, and the administration has been encouraged by the cease-fire there announced last weekend, which will bring a 60-day truce between Saudi-backed government forces and Iranian-backed Houthi rebels.

Saudi Arabia facilitated the Yemen diplomacy by announcing a unilateral Ramadan truce, and U.S. officials credit Prince Khalid bin Salman, the Saudi deputy defense minister, for the de-escalation in Yemen. Iran didn’t oppose the truce. But Iranian-sponsored Houthi missile attacks remain a threat to both Saudi Arabia and the UAE.

The war in Ukraine has been dominating the headlines, for good reason. But U.S. tensions with Iran may be about to ratchet upward if the IRGC issue leads to a breakdown in the nuclear talks and an escalation in Middle East tensions. To paraphrase a saying attributed to Soviet revolutionary Leon Trotsky: You may not be interested in the Middle East, but the Middle East is interested in you.