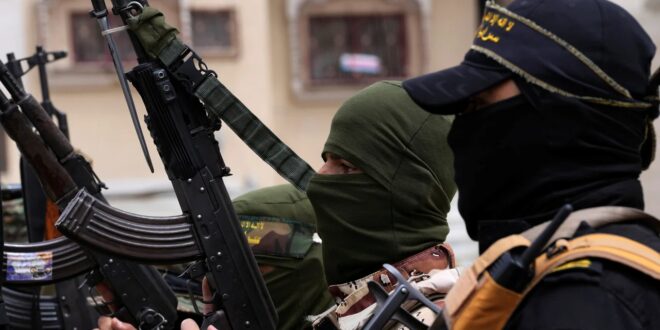 A Hamas sources says the factions in Gaza — and particularly Hamas — do not intend to fire rockets at Israel at this point, but rather wait to see how things evolve on the ground

Palestinian factions in Gaza said Wednesday that they are prepared to respond to any Israeli action and protect Jerusalem’s Al-Aqsa Mosque, as tensions in the West Bank have been on the rise in the aftermath of a string of deadly attacks in Israel.

However, a source in Hamas told Haaretz that the factions in Gaza –and particularly Hamas – do not intend to fire rockets at Israel at this point, but rather wait to see how things evolve on the ground as Palestinians mark the holy Muslim month of Ramadan and ahead of Passover.

The statement was issued after the factions held an emergency meeting convened by Hamas leader Yahya Sinwar to discuss “The Israeli aggression against the Palestinian people,” particularly in Jerusalem and at the Al-Aqsa Mosque.

Israel has sent troops to comb through Palestinians cities and villages in recent days, particularly focusing on the northern West Bank city of Jenin, looking for suspects or accomplices tied to recent Palestinian attacks on Israelis.

Meanwhile, the London-based Rai al-Youm newspaper reported that according to Palestinian sources in Gaza, Egyptian intelligence has been mediating between Israel and the factions in Gaza to prevent an escalation between both sides.

Hamas and Islamic Jihad, the sources said, have warned that continued escalation in the West Bank will force the factions to intervene.

Post Views: 155
Previous US Wages Financial War on Russia
Next NATO to Send a Permanent Military Force on Its Border With Russia Says Alliance Chief