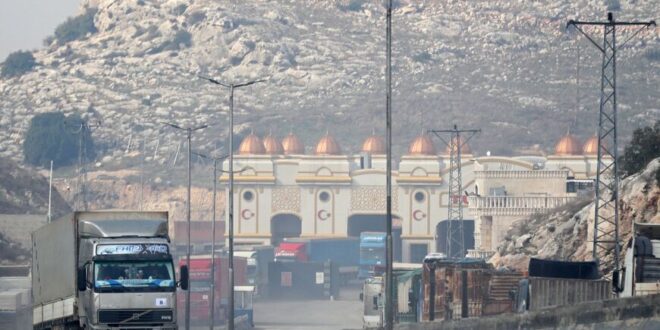 Fears are mounting about a looming humanitarian catastrophe amid concerns that Russia will close the last border crossing through which UN and NGO aid passes to reach millions of needy in north Syria.

The Syrian Response Coordination Group (RCG), an Idlib-based humanitarian nongovernmental organization assisting the displaced in northwestern Syria, has recently warned of the danger of the closure of the Turkish border crossings with Syria.

In a statement posted on Facebook March 31, the RCG said the closure of the crossings could block vital humanitarian aid heading to northern Syria, pointing to the severe shortage of aid convoys from the areas controlled by the Syrian government compared to those coming from Turkish territories.

“A new UN aid convoy entered northwestern Syria from the Syrian regime-controlled areas in Aleppo through the al-Tarnaba crossing, east of Idlib, consisting of 14 trucks of humanitarian aid provided by the World Food Program,” the statement read.

The statement added, “Since the implementation of UN Security Council Resolution 2585 of 2021 and until March [2022], only 43 relief trucks containing food aid crossed the contact lines with the Syrian regime, compared to more than 10,000 trucks passing through the Bab al-Hawa border crossing with Turkey, loaded with various humanitarian aid to cover shelter, health, education and food needs.”

The RCG further stressed in its statement the importance of the continued entry of humanitarian aid trucks across the border into the northern Syrian areas. It argued that the relief trucks must not come through the lines of contact with the Syrian government for many reasons, most notably the government’s delay in facilitating the delivery of aid and the fact that these relief trucks do not contain aid commensurate with the increasing humanitarian needs in the area.

Meanwhile, UN officials, NGOs and US lawmakers warned recently that Russia may consider closing the Bab al-Hawa crossing — the last remaining humanitarian crossing for the United Nations to deliver aid to Syria — in the event of an escalation of tension between Moscow and the West in light of the Russian war on Ukraine.

The United Nations has been delivering aid from neighboring countries into Syria through the Bab al-Hawa crossing since a 2014 resolution was adopted.

More than 1,000 trucks loaded with aid cross the Bab al-Hawa border crossing between Syria and Turkey on a monthly basis. They service about 3.4 million people living in the Idlib area in northwestern Syria.

Abdul Samie al-Qasim, who owns a vegetable shop in Idlib, told Al-Monitor that prices of vegetables skyrocketed as the holy month of Ramadan kicked off. “The one kilogram of tomatoes that was sold at 10 Turkish liras ($0.68) is now being sold at 22 Turkish liras ($1.49),” he said.

He added, “God help the poor. Everything has become very expensive in northwestern Syria where job opportunities are almost nil and unemployment is climaxing. Last Ramadan, business was much better. People would buy two or three kilos of vegetables. This is no longer the case today, as people now want to buy just one or two pieces of vegetables. Here in northwest Syria, daily average wages range between 40 to 50 Turkish liras only ($2.71 to $3.39), while some get only 30 Turkish liras ($2.04) per day. Any dish or meal will cost about 150 Turkish liras ($10.18) a day.”

Asked what the situation will be like in case of closure of borders in northwestern Syria, Qasim said, “Should Russia close the Bab al-Hawa crossing, many residents will be adversely affected. Relief is crucial for the camp residents and many underprivileged citizens. It helps them endure the current dire and harsh conditions. The closure of Bab al-Hawa will be a humanitarian catastrophe.”

Abu al-Qasim al-Hamwi, who has been selling popular Ramadan drinks such as tamarind and licorice julep for more than 25 years from his shop in the center of Idlib city square, told Al-Monitor that sales this Ramadan season have hit a record low amid the exorbitant price rise.

He explained that the merchants waited for the month of Ramadan and upped prices to unacceptable levels. He said, “This rise is taking place while Bab al-Hawa, the only outlet to the area, is still open. Its closure will lead to further hikes. We call on all concerned authorities and entities who care for the well-being of Muslims to act to cap the obscene price surge.”

Hamwi hopes that the crossing, which represents a lifeline for the aid and relief beneficiaries, would remain open since its closure would be catastrophic to the residents of the area.

Al-Monitor met with Mazen Alloush, director of the media office at the Bab al-Hawa border crossing, and asked him about the aid flowing through the crossing to the areas outside the control of the Syrian government, whether in Idlib or the Euphrates Shield areas. “In 2020, around 1,412 trucks loaded with 228,000 tons of aid crossed the border. In 2021, the number of aid decreased slightly with 9,608 trucks loaded with around 215,000 of aid. In the first quarter of 2022, only 826 trucks loaded with 42,000 of relief aid entered through Bab al-Hawa crossing.”

He added, “If the [UN] mechanism for the provision of humanitarian aid into Syria through the crossing is not renewed, UN aid will decrease — although the crossing will remain open for commercial activities and other aid by NGOs.”

He said the UN provides the bulk of aid for more than 2 million displaced residing in the camps in north Syria, and its halt would amount to a humanitarian disaster.

Of note, the UN mechanism was last renewed in January for six months.

“According to our information, NGOs operating on the ground and partnering with the UN have an emergency plan to deliver aid to the displaced in areas outside the control of the Syrian government until the end of 2022. But the Bab al-Hawa crossing administration hopes the UN aid mechanism will be renewed; otherwise, more than 2 million people residing in the camps in northwest Syria will suffer a dire humanitarian catastrophe,” Alloush said.