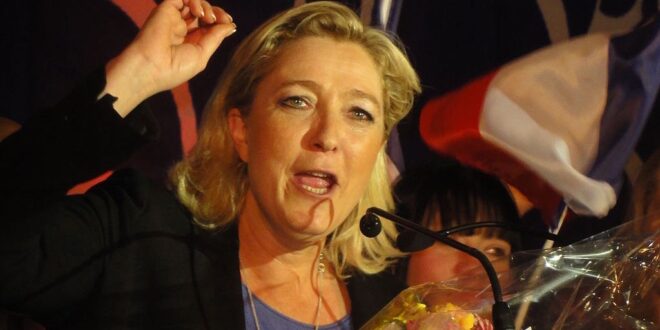 A Le Pen Presidency Was Not a Possibility Before. It is Now.

The far Right does not command a majority in France. But Macron’s arrogance and elitism, plus divisions on the Left, could hand it a victory.

On the face of it, Sunday’s results look like a carbon copy of 2017. Emmanuel Macron, the incumbent president, came first with 28%, followed by Marine Le Pen for the far-Right Rassemblement National (23%), then Jean-Luc Mélenchon for the radical Left France Insoumise (22%). Just like in 2017, Le Pen defeated Mélenchon by a whisker, denying the latter a place in the second round.

In reality, these results are surprising and even unsettling. Abstention was high: at 26%, it came close to the record 28% set in 2002. In French democracy, large numbers of young, poor and racialised people now permanently abstain from voting.

The main event, however, was the complete collapse of the two parties that not so long ago dominated the French political system: the centre-Left Parti Socialiste (PS) Les Republicains (LR), heirs to France’s Right-wing Gaullist tradition. Until 2017, the PS and LR used to take turns in office; at this election their candidates received 1.75% and 4.78% of the vote respectively. Their fall from grace is staggering. It is unclear whether they will ever recover at national level, but the early signs are not good.

There are multiple reasons for the decline, but Macron’s positioning of himself as both centre-Left and centre-Right has surely undermined both parties. He has quite literally “vampirised” the PS and LR, syphoning off most of their electorate. La République En Marche, the movement created to support his first run at the presidency in 2017, has absorbed large chunks of PS and LR voters, as well as leading members of both parties.

This realignment has especially weakened the Left. Its social democratic component has now almost completely vanished, even as social democrats are experiencing a relative revival in Spain, Portugal, Germany and some other parts of Europe. While some PS voters will have switched to Macron, others will have opted for Mélenchon, just to give the Left a chance to make it into the second round.

Mélenchon has once again performed extremely well in this election. He started off slowly but caught up with his left-wing rivals, to eventually become the only progressive candidate who could challenge Macron and Le Pen. Mélenchon is a charismatic orator, if one likes a lyrical and grandiloquent politician – and most French left-wingers do – and he works hard, having started campaigning for this election two years ago. He makes innovative use of social media and new technology, appearing in several cities at once via holographic projection, as he did in 2017.

But Mélenchon is also an extremely polarising and divisive figure. Having achieved pre-eminence on the Left in 2017, by receiving almost 20% in the first round, he should have engaged with other parties and traditions – Greens, communists, Trotskyists, the centre-Left – to form a loose alliance ahead of this year’s election. But he categorically refused to negotiate with others, mocking the ‘old Left’ and choosing to go it alone. Had he sought the support of the Communist Party and the Greens, he would now likely be facing Macron in the second round. But Mélenchon is neither François Mitterrand nor Lionel Jospin, leaders who were able to win power through compromise.

Mélenchon’s triumphalism after Sunday’s result does not augur well for the future. He and his supporters are arguing that the ‘radical Left’ is now dominant among the wider Left. That remains to be seen. His remarkable performance has more to do with tactical voting by moderate left-wingers, who desperately sought an alternative to a Macron-Le Pen rerun, than with support for his ideas or his controversial personality. A post-election poll showed that of all three main candidates, Mélenchon benefited most from tactical voting.

This election was also marked by competition on the far Right. In the end, the pundit-turned-politician Éric Zemmour did not do well, receiving a disappointing 7%. His candidacy was literally manufactured by CNews, a kind of French-style Fox News, owned by the billionaire Vincent Bolloré. Zemmour was given a platform by virtually all mainstream media to spout racist and extreme opinions, but some of his potential voters eventually either got bored or were scared off. His far-Right radicalism has helped Le Pen come across as ‘moderate’ – which, in policy terms, she is not.

Le Pen was astute enough to let Zemmour do the talking on Islam and immigration, while she concentrated on bread-and-butter issues: jobs, “social inequalities” and public services. Make no mistake, Le Pen’s economic outlook is anything but socialist. It remains a piecemeal collection of inconsistent measures which advocate tax cuts. Her ‘left-wing’ policies of 2017 have been abandoned (retirement age set at 60, defence of 35-hour working week or of the statute of public service workers). But this now comes wrapped up in folksy rhetoric, which has helped her win over a significant number of working-class voters.

Her flagship policy remains the so-called National Preference, which would authorise discrimination against foreigners living in France on socio-economic and welfare matters. This is currently illegal and unconstitutional, and to implement it Le Pen would have to amend both France’s constitution and some of its basic laws. This is classic far Right territory.

The next two weeks will be crucial for the future of France, and perhaps Europe. For the first time since the Vichy regime of the 1940s, the far Right is in a position to gain power. Opinion polls show that the two remaining presidential candidates are neck and neck – and Macron is largely to blame for the situation.

After his election in 2017, Macron did not govern as a centrist. Rather, he moved sharply to the right throughout his term on law and order, immigration and Islam. His economic agenda, meanwhile, is seen by many as having catered to affluent voters. Macron is commonly viewed as aloof and arrogant. People outside France tend to underestimate the depth of his unpopularity, including the extent to which he is detested by the young, the racialised and public sector workers. Yet the support of these voters, who lean to the Left, will be crucial for his re-election.

There is now a chance that Macron will lose an election he should have no chance of losing. Although far-Right candidates received a combined 30% in the first round, they do not have majority support. The threat to Macron comes from the collapse of the so-called front républicain – a strategy by mainstream parties to form an alliance against the far-Right when necessary. This worked in 2002, when Jacques Chirac defeated Le Pen’s father, Jean-Marie, by an 80-20 margin, and again – though less convincingly – when Macron beat Marine Le Pen in 2017, at 66% to 34%.

Both Le Pen and her father have spent years trying to “de-demonise” the party she leads, which switched its name from Front National to Rassemblement National (“national rally”, RN) in 2018. She objects to the media and her political opponents calling the RN a ‘far Right’ party (which it is), because it puts off potential supporters. This time around, her efforts may succeed because Macron has angered entire categories of French voters.

Many left-leaning voters, who have been disciplined enough in the past to vote for a conservative candidate to ‘stop fascism’, appear to have now had enough. Opinion polls show that up to a third of Mélenchon’s first-round voters would currently opt for Le Pen in the second, while up to another third would abstain. These figures do not look good for Macron, who will have to listen to and win over this electorate. He cannot afford to be complacent.

The threat is all the more real given that some Left-wing candidates, including Mélenchon, do not want to explicitly call on their supporters to vote for Macron. “We know for whom we will never vote! You must not give your vote to Marine Le Pen!” Mélenchon told his supporters on Sunday evening. The message was widely interpreted as implicitly condoning abstention, which would facilitate Le Pen’s victory.

The old anti-fascist reflex is fading away on the left, the conservative electorate has radicalised, Zemmour has further mainstreamed racism in French society and Le Pen has softened her image. Macron, meanwhile, is the sole target of a volatile and angry electorate. The conditions have been set for France to sleep-walk into a far-Right presidency. This was not a possibility before. It is now.