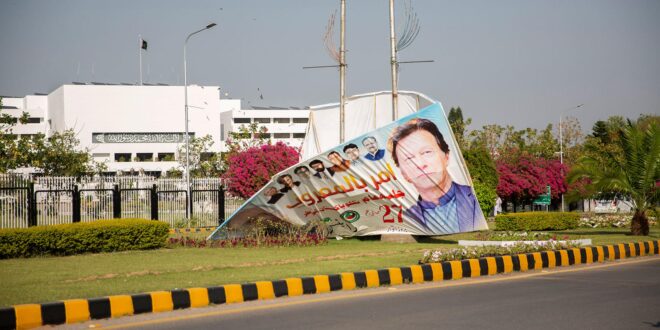 What’s Next for Pakistan’s Politics After Ouster of Imran Khan?

The country’s political crisis may have abated, but the road ahead is littered with challenges for the next government.

After a month of political crisis in Islamabad, Pakistan’s united opposition parties successfully removed Prime Minister Imran Khan in a vote of no confidence on April 10 and then on April 11 voted in opposition leader Shahbaz Sharif as the new prime minister. The votes came after the Supreme Court of Pakistan blocked earlier attempts by Khan’s Pakistan Tehreek-e-Insaaf (PTI) party government to dismiss the motion and move directly to fresh elections. Khan remains defiant despite his ouster, alleging an international conspiracy against him and denouncing his rivals and defecting party members as traitors to the country, and his followers continue to rally across the country.

USIP’s Colin Cookman, Asfandyar Mir, Tamanna Salikuddin and Jumaina Siddiqui assess the political turmoil and its implications for the future of Pakistan’s relations with the United States, the civil-military balance and the country as a whole.

Khan accused the United States of backing the no-confidence motion against him, accused his rivals of conspiring with the United States and has sought to position himself as a defender of the country’s foreign policy independence. How will Khan’s campaign impact future U.S.-Pakistan relations?

Salikuddin: Former prime minister Imran Khan tried to block the no-confidence vote against him by making the political crisis into a national security issue and cynically drawing on popular anti-imperial and anti-American sentiments. Khan’s particular brand of right-wing nationalism fuels conspiracy theories that the West, and particularly the United States, has long been calling all the shots in Pakistan. PTI’s proclamation of an “independent foreign policy” resonates with the urban upper class and youth voters, but also got Khan in trouble with the military establishment that prefers to balance ties with both the United States and China. U.S. policymakers see the accusations as desperate political moves and are somewhat assured by both the Supreme Court’s decision that did not call for any investigations into an alleged “foreign plot” and General Bajwa’s recent statements at the Islamabad Security Dialogue reaffirming U.S.-Pakistan ties.

Khan made a high-profile visit to Moscow in late February — planned well before Russia’s invasion of Ukraine — in a bid to seek Russian energy assistance. Even though Russian troops had entered eastern Ukraine by then, he insisted on making the trip in defiance of Washington, irking many in the Pakistani establishment. This made Khan the first foreign leader to visit Russia after the war started. Bajwa’s statements on Ukraine at the Islamabad dialogue were clearly aimed at mollifying the United States while still keeping the door open to Russia. The new prime minister will likely dial back any outreach to Russia and mostly defer to the military on these thorny foreign policy issues.

Following the U.S. withdrawal from Afghanistan, the U.S.-Pakistan relationship has continued at the working level but lacks the high-level attention of the last 20 years. Khan’s continued accusations and the ongoing PTI protests alleging U.S. involvement in the no-confidence motion may create near-term incentives for the United States to engage even less with Pakistan. But with Khan’s exit there may be an opportunity to reset relations between the United States and Pakistan, especially in light of Army Chief Bajwa’s and Prime Minister Shahbaz Sharif’s interest in maintaining a realistic (read transactional and economic) relationship with both the United States and China, and openness to some rapprochement with India.

The PTI government had worked closely with Pakistan’s powerful military establishment since first coming to power in the 2018 general elections. Are the military and civilian leaders in Pakistan no longer on the same page, and what implications does this have for civil-military relations going forward?

Mir: Khan’s ouster following the high drama in Islamabad resulted in part from his break in ties with the Army Chief General Qamar Bajwa — who, along with the ISI head Nadeem Anjum, chose to stay “neutral” in the PTI government-opposition standoff. Khan’s pushing of a U.S. regime change conspiracy narrative and blocking of the vote appears to have also angered the senior military leadership, who distanced themselves from both of Khan’s decisions.

The military establishment’s withdrawal of support seems to have derived from multiple factors. For one, the Army worried about Khan’s governance — which, given the perception of Khan being the military’s chosen political leader in 2018, came to undermine the military’s own standing. Second, there appear to have been differences between Bajwa and Khan over foreign policy, ranging from how to handle ties with the United States to opening of trade with India. Bajwa seems to have wanted a conciliatory approach to relations with the United States and arch-rival India — perhaps because of Pakistan’s growing strategic challenges reflected in the country’s economic woes. Khan, on the other hand, leaned into populist anti-American and anti-Indian narratives.

Two factors can complicate civil-military dynamics under the new Shahbaz Sharif-led government. For one, in the near term, Bajwa must contend with a serious possibility of backlash from within the military over Khan’s ouster. Many in the officer corps appear sympathetic to Khan’s populist worldview and share his general disdain for political leaders of the new governing alliance. Additionally, Bajwa’s own standing in the army is questioned by some analysts — he is, they say, a controversial army chief in his second term, which is slated to end later this year. As a result, even though Pakistan’s army remains generally well disciplined, there are risks of dissent against the chief. Bajwa will have to manage the army’s cohesion carefully — which is difficult but not impossible for an army chief with a range of powers.

Second, the new government will have to decide who will succeed Bajwa as the army chief later in the year. Military transitions in Pakistan are always tenuous — and this time especially so. It is plausible that the new government may extend Bajwa’s term yet again — assessing his demonstrated “neutrality” amid the vote of confidence saga as likely to ensure a smooth election. But another extension for Bajwa can aggravate the military’s senior leadership, especially those generals who are in line to be considered as the next chiefs of the army. Khan can also oppose Bajwa’s extension from the opposition benches. More likely will be the appointment of a consensus army chief candidate who doesn’t raise any red flags. In either scenario, this will be an important appointment with major implications for Pakistan’s domestic stability and ties with the rest of the world.

How is all this political uncertainty affecting Pakistan’s broader public, and the country’s overall economic situation? What other challenges will the new government face?

Siddiqui: Despite the political chaos of the last month, ultimately the Supreme Court’s decision and the passing of the no-confidence motion were carried out per the Pakistani constitution. This was the first time in Pakistan’s history that a prime minister was removed by a vote of no confidence rather than some exogenous event. The constitutional resolution of the political crisis may evidence that the age of coups under the “doctrine of necessity” has been buried, some say forever.

Even though PTI supporters have taken to the streets in mass rallies across the country, they have been fairly peaceful, but will be a force for the Shahbaz Sharif government to contend with in the short term. Setting aside the political turmoil, the new government is facing a weakened economy with double digit inflation, a weak rupee and growing poverty. Unfortunately it is the average Pakistani that is feeling the sting of this economic woes as it becoming more difficult for them to afford everyday necessities such as food and fuel. In addition to these economic challenges, the next government will need to address a number of milestones occurring in 2022. This includes the submission of Pakistan’s annual budget in June 2022; the end of Pakistan’s current IMF program in September 2022; and, as discussed above, the selection of the new chief of army staff as the incumbent’s term expires in November 2022.

The IMF has said that they are putting the program on “pause” until the new government is in place and re-starting the program will be the Sharif government’s top priority. Given the PTI government’s populist schemes, there is an impending balance of payments crisis that the new government must contend with and they are already looking to Saudi Arabia, the UAE and China for loans. The Chinese have agreed to rollover $2.5 billion in loans as a temporary stopgap. The Sharif government will need to present a budget and robust economic plan, and engage in concerted outreach and collaboration with the IMF to address the economic crisis, lest they find themselves in a situation like Sri Lanka. The new prime minister will likely be on a short leash from the military establishment when it comes to the economy, foreign policy and domestic governance.

How stable is the new government likely to be? Should we expect new national elections in the near term?

Cookman: The new governing coalition will seek to implement some package of administrative and legal changes and take other actions to roll back the influence of remaining PTI officials and appointees (potentially including President Arif Alvi, whose term in office runs through September). There are also administrative hurdles to conduct elections — Election Commission of Pakistan officials have previously stated that the earliest they could do so would be October of this year, and are currently aiming to finalize new constituency boundaries by August, using 2017 census data. This plan means moving ahead without waiting for a planned new census that is unlikely to be completed before the end of the year, which could cause a backlash among coalition partners who had objected to the findings of the previous census count. It is likely that the new government will call for “early” elections to rebalance its position in parliament ahead of the normal five-year schedule that would have otherwise meant elections in the fall of 2023; this may be in early 2023, but not immediately as the PTI would like.

While Khan has taken the political initiative in launching a defiant return to campaigning from the opposition, his party saw major defections in the run-up to the no-confidence vote. The former opposition parties and PTI defectors united behind the goal of removing Khan from office, but now face the difficult challenge of establishing a governing agenda and future political strategy in a coalition with multiple potential veto actors. In the absence of close cooperation and power-sharing among the new governing coalition, or stronger interventions by the military or judicial establishment to restrain or aid the major political actors, this would suggest that whatever electoral campaign that follows is likely to be more fractious and multi-partisan than the last elections in 2018. That environment raises the importance of small spoiler parties — either in determining the outcome of first-past-the-post calculations, or by raising the incentive for larger parties to take stronger positions to try and woo those voters. It also contributes to greater uncertainty about the potential range of post-election outcomes. That said, it is highly unlikely that the military would support the PTI as it did in 2018, and Pakistan has historically never seen the same government return to power in the next election cycle.