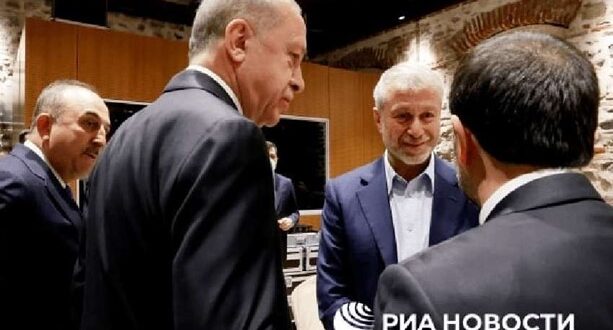 While Western media have reported on some Russian oligarchs’ recent hurried investment in Turkey to avoid Western sanctions,[2] this investment has been going on for several decades. Turkish President Recep Tayyip Erdoğan met with Russian businessman Roman Abramovich during the negotiations that took place at Istanbul’s Dolmabahçe Palace in late March 2022.[3] During the meeting, Abramovich reportedly thanked Erdoğan, apparently for having Abramovich and four others treated at a hospital in Ankara and keeping their names secret after an incident in the Ukraine following the peace talks in Istanbul.[4]

This report will review some of the information in Özcolak’s article.

Vagit Alekperov, whose net worth is estimated at $19.6 billion, owns 28.3 percent of the shares of Russian multinational energy company Lukoil. In Turkey, there are close to 600 fuel stations, constitutiong about five percent of marketshare, belonging to Lukoil and Akpet, a Turkish fuel distrubition company that Lukoil bought in 2008.[5] In December 2015, Alekperov reportedly bought The Edition Hotel in Istanbul’s Levent district from Mübariz Mansimov,[6] an Azeri businessman who has made headlines in connection with claims made by Turkish organized crime leader Sedat Peker[7] concerning the Bodrum Yalıkavak Marina.[8] Following a 2010 meeting of the Lukoil Board of Directors at Istanbul’s Çırağan Palace attended by then Turkish Energy Minister Taner Yıldız, Alekperov announced that Lukoil would be investing $100 million in Turkey.[9] By 2017, Lukoil investments in Turkey had increased to $1 billion and involved a cooperation with Miller Holding in Turkey’s Çanakkale province.[10]

Leonid Mikhelson, whose net worth is estimated at $34.5 billion, owns 48 percent of the shares of Russian petrochemical company Sibur.[11] In 2019, a senior Sibur executive said following the company’s collaboration with the Turkish companies Rönesans and Yamata in building the ZapSib complex in the town of Tobolsk in Siberia, which took four years and $9.5 billion to complete, that “Turkey is an important market for Sibur.”[12] In October 2021, Sibur Executive Director Sergey Komyshan said: “There is no doubt that Turkey will continue to be one of Sibur’s main supply territories. Also Turkey is important as a delivery point of our products to various territories such as Israel and North Africa.”[13] Sibur has an office in Levent, which is one of İstanbul’s main business districts.[14]

Vladimir Lisin, whose net worth is estimated at $26.6 billion, is chairman and majority shareholder of Novolipetsk, which is one of Russia’s four largest steel companies. Novolipetsk, which opened a sales office in Turkey in 2017, said on its website that Turkey accounts for 20 percent of the company’s exports.[15]

New Winter Capital Partners, an investment fund belonging to Vladimir Potanin, whose net worth is estimated at $24.4 billion, invested $35 million in the Turkish delivery application Getir.[16]

Mikhail Fridman, whose net worth is estimated at $11.8 billion, owns a company called LetterOne, which owns 24.8 percent of Turkcell, a major Turkish telecommunications company.