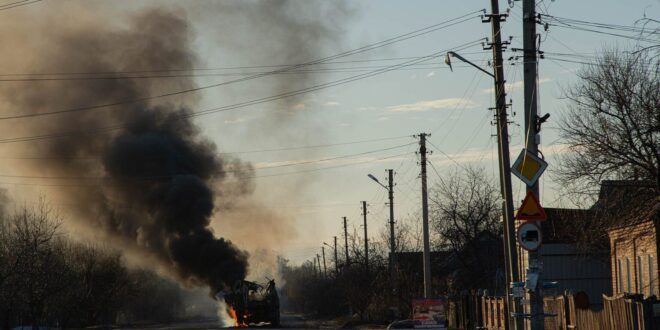 “War is too serious a matter to be left to the soldiers,” said the French First World War prime minister Georges Clemenceau. But the evidence of most wars in history is that they are also too serious to be left to the politicians. This failing is not yet evident in Ukraine only because fighting is still raging on the battlefields of the Donbas and is likely to escalate.

But it should already be clear that the end of the war, if it comes at all, is more likely to be brought about by politicians – as difficult as that might be – and not by soldiers because the chances of either Russia or Ukraine winning a decisive victory have already disappeared.

The key question now is how and when the fighting will cease – or have the chances of a compromise peace already been overwhelmed by the sheer momentum of military conflict and the hatred it inspires?

Bizarrely, the main points in dispute have probably been decided. Russia is never going to conquer Ukraine because its forces do not have the strength to do so in the face of fierce and united Ukrainian resistance supplied with arms by the Nato states. This should have been self-evident to President Vladimir Putin long before he launched his disastrous invasion on 24 February, but his capacity for self-deception appears bottomless.

But it is equally unlikely that Ukraine will defeat Russia and drive its forces out of Ukrainian territory, as some politicians are now recommending as a war aim, however many weapons systems it receives from the West.

Russia is unlikely to repeat the same amateurish mistakes it made in the first two months of the war when it fragmented its inadequate forces so none of their attacks were strong enough to succeed.

Putin falsely claimed then that he had only invaded because Russia faced an existential threat. But his gigantic blunder turned this largely imaginary threat into a reality, enabling Putin – with his full control of all Russian media outlets – to persuade Russians that they now have no choice but to fight. Western sanctions are a double-edged sword because, though they do great economic damage, they are a collective punishment inflicted on all 145 million Russians who feel that they are left with no choice but to rally to the flag.

Russia’s enemies show an understandable reluctance to let Putin off the hook by relaxing the pressure on him or giving him an escape route out of the quagmire into which he has plunged his country. “There is an unfortunate dilemma,” a senior European diplomat is quoted as saying by the Washington Post. “The problem is that if it [the war] ends now, there is a kind of time for Russia to regroup and it will restart, under this or another pretext. Putin is not going to give up his goals.”

Even a military stalemate is not necessarily in the interests of East European states near the conflict zone. “This is a major issue for us,” says a senior diplomat from one of the countries bordering Ukraine. “A divided, frozen, fragmented conflict in Ukraine is a very bad deal for us. An active Ukraine-Nato relationship is crucial for the Black Sea region.” Without Nato backing, he believed that there was every prospect of unchecked Russian aggression in the future.

It is easy to see why those who want to fight Russia to a finish now feel that their moment has come, but their policies are full of risks because they contain a number of contradictions. They assume that Russia is powerful enough to pose a serious threat to its neighbours, but at the same time so weak that it can be permanently defeated on the battlefield. They portray Russia as being under the total control of an autocrat in the Kremlin cut off from reality and spoon-fed only good news by his servile advisers. But this same half-crazed and ill-advised dictator is expected to behave with sensible restraint when it comes to widening the war or using nuclear weapons.

This hawkish stance is easy enough for powers outside Ukraine because it is the Ukrainians who will be doing the fighting. Those who glibly call for total victory over Russia are being as unrealistic as Putin was two months ago when he ordered the invasion of Ukraine in expectation of a walkover.

This lack of realism is masked for the moment because Russia is still trying to make at least some territorial gains by taking Mariupol and the half-ruined cities in the Donbas, and the opportunity for a counter-attack has not yet arrived. But there are worrying signs that the Ukrainians and their Western allies are taking their own triumphalist propaganda too literally and acting as if it were all true.

The Russian army is likely to fight more skilfully in the next few months, if only because it will almost inevitably do better than its initial feeble performance. For instance, Russia has been accused of pursuing the same ruthless tactics as those used by the Syrian government backed by Russian airpower against the armed opposition after the 2011 uprising. These were to blockade rebel-held urban areas, bombard but not assault them, allow much of the surviving civilian population to flee, but seal off hostile areas. This approach worked well, cutting down on Syrian army casualties and confining enemy fighters to small islands of territory where they were effectively incarcerated with little hope of escape.

Surprisingly, the Russians did not use these successful tactics in their abortive invasion of northern Ukraine, probably because they were short of military manpower. But as the second phase of the war opens in Donbas, Russian forces reportedly outnumber the Ukrainians by three to one, allowing Putin to order the blockade of the vast Mariupol steel works.

Overall, the war in Ukraine is beginning to look more and more like Syria: a military and political stalemate with limited chances of breaking the deadlock. Too many players with too many different interests are involved to bring the conflict to an end unless Russia and the US are determined to do so – and there is little sign so far of that happening.

Look at Putin’s posture, like some King of Kings in a Persian miniature, as he receives news of the capture of Mariupol from his fawning defence minister. He does not look like a man conscious that earlier this year he made one of the most catastrophic misjudgments in Russian history.

Not that President Joe Biden, feebly trying to get a grip on events, or Boris Johnson, endlessly seeking to divert public attention from his latest domestic scandal, look like the sort of people you want to see in charge of defusing the worst crisis in Europe since 1945.

In the Middle East these half-frozen wars can go on for decades, but I doubt if this could happen in Ukraine because the crisis is no longer solely or even mainly about that country but has transmuted into a general confrontation between Russia and the West.

When I read about Boris Johnson’s attack on Justin Welby, the Archbishop of Canterbury, for criticising the government’s plan to deport to Rwanda asylum seekers crossing the Channel, I looked through the window of my house in Canterbury at the medieval church of St Dunstan’s 40 yards away on the other side of the road.

The reason why Johnson’s self-serving attempt to divert attention from the latest scandal to engulf him made me glance at the church is that it is closely associated with two of the greatest religious martyrs in English history, who were both killed for opposing the secular power. In a crypt in St Dunstan’s is the head of Sir Thomas More, executed in 1535 for refusing to accept Henry VIII as Supreme Head of the Church of England and other acts of opposition to the Reformation.

Presumably a 16th century Johnson would have been cheering on the executioner who beheaded More on Tower Hill for putting a proper end to a man who believed that religious faith could not be separated from political allegiance.

The reason why More’s severed head is in there is that his daughter Margaret Roper rescued it from a stake on London Bridge and put it in the crypt of the Roper Chapel which was close to the house where she lived.

But St Dunstan’s has an early link to English prelates who criticised and opposed the political powers-that-be. It was from here that Henry II, barefoot and wearing a hair shirt, began his walk to Canterbury Cathedral on 12 July 1174 in penitence for his role in the murder of the Archbishop of Canterbury, Thomas Becket, three and a half years earlier. It was never entirely clear how sorry Henry really was for having precipitated, probably accidentally, the killing of his former friend turned enemy by four of his knights, but he certainly knew how to say sorry.

He confessed that “his incautious words” had led to the killing, asked to be punished, was whipped by the monks and spent the night praying in the cathedral. This was so successful as a bit of royal theatre that he kept returning to Canterbury in later years to repeat his ritual penitence.

A message here, perhaps, for Johnson the next time he has to make his incoherent apologies for some piece of mendacity or chicanery.

A UK court has formally approved the extradition of Julian Assange, the WikiLeaks founder, to the US to face espionage charges. What Assange did was no different from what any investigative journalist does. But once again there has scarcely been a cheep out of the British media, both liberal and conservative.

Compare the treatment of Assange with that of Katherine Gunn, the GCHQ translator who leaked a classified memo to a newspaper in 2003 exposing a US plot to spy on the UN shortly before the invasion of Iraq in 2003 in the excellent film Official Secrets with Keira Knightley playing Gunn.