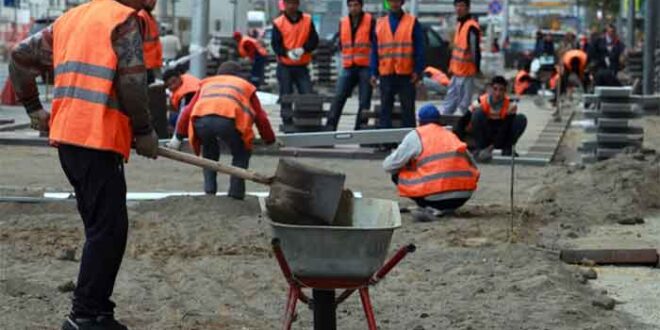 Russian labor market and its prospects for Indians

Employees leaving the labor market are moving into the category of state-funded pensioners, increasing the burden on the Pension Fund and the Federal budget. This trend is expected to continue in the medium term.

Together with the growth of life expectancy, this state of affairs becomes a challenge for the government to provide social guarantees. The current situation prompted the country’s leadership to start a reform to gradually increase the retirement age. This will keep experienced workers in the market and redistribute the costs of the Pension Fund. However, due to the specifics of the Russian pension system, the economy needs workers who pay taxes and make monthly contributions to the Pension Fund.

Consequently, the Russian economy in its current form needs at least 70 million workers not only to maintain production, but also to fulfill basic social guarantees.

In 2000-2020, the Russian economy used its labor force almost to the maximum. Over the past 20 years, the unemployment rate in Russia has been steadily declining, except for the crisis years of 2008-2010. Then unemployment reached 8.3% of the entire labor force.

The recent rise in unemployment happened in 2020 under the influence of the covid-19 pandemic. However, the pandemic factor was regarded as temporary. It hit the service sector the hardest – shopping malls, restaurants, nightclubs and cinemas. The immunization of the population and the abolishing of quarantine restrictions stimulate the revival of the economy and its return to pre-pandemic levels.

In recent years, the countries of the former USSR have served as a source of labor for Russia. In Russia, there is a large influx of migrants from Ukraine, Belarus, Moldova, the states of Central Asia and Transcaucasia.

The largest donor of labor migrants in 2010-2020 are the countries of Central Asia. Since 2000, the population of three republics – Uzbekistan, Tajikistan, Kyrgyzstan and has grown by 10, 3.3 and 1.7 million people. As a percentage, these figures look even more impressive. Uzbekistan and Tajikistan added about 30%, Kyrgyzstan – 25%. After the collapse of the USSR, the economies of Central Asia experienced a decline. The government and private enterprises could not employ the entire workforce. Therefore, young people began to massively go to work in Russia.

Many migrants (mainly from Ukraine and Belarus, as well as ethnic Russians from all the republics of the former USSR) eventually received residence permits and citizenship, replenishing the Russian labor market. The rest are counted as labor migrants. However, since many migrants work semi-legally or illegally, it is difficult to accurately calculate their number. Various estimates for 2017-2019 converged on approximately 10 million people. During the pandemic, this figure dropped to 6-7 million people.

It can be expected that some migrants will return to Russia, while others will look for new destinations. Among the Kyrgyz, for example, Turkey is popular. An exit channel is being formed to the countries of the Middle East – the United Arab Emirates, Qatar, Oman. Educated youth are considering moving to Europe, the US, South Korea, and Japan.

Although Russia retains an advantage in attracting labor from Central Asia, Russia may have to compete for these workers in the foreseeable future. This has already happened with Moldova, whose workforce has shifted to the EU labor market. Another option is to search for alternative donor countries. It is not easy to do due to higher logistics costs and adaptation barriers.

Structure of employment by industry

The most common professions in Russia are driver and salesman. Further – accountants, teachers, loaders, cleaners, security guards and doctors. Many of these professions do not require high qualifications. Overall, unskilled workers make up about 7% of the workforce. Pay in these areas is usually not high, but there are exceptions.

Now in Russia there is a growing demand for engineers and qualified blue-collar workers. At the same time, wages are on the rise. Jobs are becoming more profitable.

Urbanization and renovation of cities continues in Russia. Tens of thousands of migrants work in construction now. The Ministry of Construction and Russian developers are interested in the labor force to keep the business going.

It is worth noting that during the pandemic, some migrants moved from construction to less difficult areas. For example, they became food-delivers and taxi drivers. This exacerbated the shortage of workers in the construction industry.

Finally, there was a stereotype in Russia that migrants were mostly unskilled workers. However, Russia has received many engineers from Ukraine and Belarus, and there are really good opportunities for IT specialists in Russia. Migrants from Central Asia work not only in construction, but also in healthcare. Some of them start their own business.

In Russia For many years there have been difficulties with labor productivity. OECD calculates this indicator as GDP produced per 1 hour of working time. According to the organization, in 2020 Russia produced $27.7 worth of goods and services per hour, which is slightly better than in Costa Rica and slightly worse than in Chile. Russia is 4 times behind the leading Ireland. Of the post-Soviet countries, Estonia can be singled out, where labor productivity reaches 41.8 dollars. In India, labor productivity does not exceed $10. In general, for OECD countries, this figure is 54 dollars.

Over the past 20 years, Russia has managed to increase labor productivity by 45%. In the 2000s, this became possible thanks to a significant increase in oil and gas prices, which allowed to increase GDP and to stimulate the development of other industries. After the financial crisis of 2008-2010, labor productivity began to grow more slowly. The fall in world prices for hydrocarbons reduced GDP, and then growing sanctions pressure was added to this.

Sanctions from developed economies complicate the import of high-tech equipment to Russia. The modernization of production facilities with the help of imported equipment has also been an important growth driver for Russian enterprises in recent years. The use of modern machine tools and robotization made it possible to reduce the number of employees of enterprises by several times.

The recent major wave of sanctions could significantly slow down the modernization of production. In some cases, a rollback due to the inability to maintain and repair imported equipment is not ruled out. This means that the demand for labor in Russian industry and agriculture will remain quite high. Just keep in mind that in many cases such work will be low-paid.

Of course, Russia will look for all possible solutions. Therefore, on the one hand, the Russian economy will need workers, on the other hand, Russia needs to modernize equipment. The latter is possible with the development of our own machine tool industry and establishing contacts with potential exporters of equipment.

Perspectives for migrants from India

As per the United Nations Department of Economic Affairs about 17 million Indian were living abroad in 2017, it was 7 million in 1990. The number of unskilled migrants was 6, 37, 000 in 2011, which decreased to 3, 91,000 in 2017 as per a report by the Asian Development Bank. International emigration increases when more people have the access to financial resources to travel abroad and decreases when countries reach upper-middle income status. Limited or decreasing opportunities in the home country, combined with labor demand abroad causes international migration for about 73% of workers in their host countries as per the ADB report. India’s working age population is increasing by 1.3 million per month, in a stagnated job market creating new challenges for employment.

With the rapid expansion of Gulf countries’ economies, large scale development project started in these countries. Worker from India and other South Asian countries started to migrate there. Between 1990-2017 the number of Indians living in Qatar increased from 2, 738 to 2.2 million. Oman and United Arab Emirates saw increase of Indian population 688% and 622% respectively, whereas in Saudi Arabia and Kuwait Indian population rose by 110% and 78% during 2010-2017.

Within India, southern states like Kerala and Tamil Nadu have been traditional sources of migrant workers to the Middle East and South East Asian countries, however, lately less developed states like Uttar Pradesh and Bihar are taking the lead in sending low-skilled youths overseas.

Emigration from India to Gulf Cooperation Council (GCC- Bahrain, Kuwait, Oman, Qatar, Saudi Arabia and the United Arab Emirates) increased since the 1970s due to the oil boom. Oil boom has attracted both semi-skilled and unskilled labors from India. Most of these workers emigrate mainly for economic betterment and for short period of time. Their economic success motivates other Indian youths to migrate to these countries, which is the reason we see the increase in their number of Indians going to Gulf countries. The remittances sent by these workers help their families come out of poverty as well as boosts economic growth in their parent states. It is not to say that their life in host countries is hassle free, however, given the benefits, this trend has continued for more than three decades. As compared to their parent states, the sense of security, availability and accessibility of facilities in the host countries as well as regular income have been noted as major causes to attract migrant workers. The reason for providing a comparative picture of GCC is that Russia is also an oil rich country, and given the current restrictions, and India’s high number of working population, a match can be found.

Below we discuss advantages and disadvantages of such proposition-

In our opinion, one should not expect a large influx of Indians to the Russian market in a short run. Establishing labor migration channels from India to Russia is much more difficult than from Central Asia or Moldova. However, there is potential to draw Indians into the Russian economy. The foundation for this is educational migration. Every year a large number of Indians enter Russian universities. Some of the graduates do not return to India, but remain in Russia. There are already several examples of successful Indians in Russian business and even politics. There is also an option with the creation of joint Russian-Indian enterprises. Such companies can attract Indian workers to Russia. The most promising projects are in pharmaceuticals, the space industry and other areas (but they require both semi and skilled professionals, with lesser demand for unskilled workers).

– The vacant niches in the economy and the labor market after the departure of Western campaigns and the outflow of some migrants from donor countries;

– Opportunities for the emergence and growth of new economic industries (more joint Russian-Indian companies instead of European ones);

– In large cities and in large industries, the level of wages is higher than in India;

– Possibility to rent land both for life and for economic activity;

– One needs to learn Russian (English can be used as a language of communication within large international companies, but for other issues, including legal procedures, knowledge of Russian is extremely important);

– Competition with Russian citizens for a shrinking labor market (after the pandemic and the departure of some Western companies, many Russians will look for work);

– If the purpose of the move is to start a business in Russia, then difficulties may arise due to regulations;

– Due to sanctions, there may be difficulties with cross-border payments and money transfers (from Russia it is impossible, for example, to pay for Apple services);

– Possible fluctuations of the ruble against the dollar;