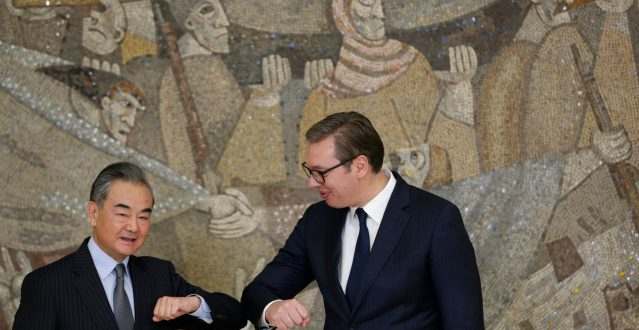 Pressured by the West Over Russia, Serbia May Look To China

As Belgrade feels the heat over its warm ties to Moscow, Beijing’s stake in the country is likely to grow.

Serbia is coming under significant pressure over its policy towards Russia due to current events in Ukraine. A country on track to EU accession, with European values enshrined in its constitution and a near-majority supporting EU membership, it has long benefitted from cooperation both with Europe and Russia. This policy is supported by a high share of the population, especially supporters of the current government. But now, as a sharp turn further in the direction of either Russia or the EU looks relatively unlikely, Chinese influence is likely to increase.

The move, considered a show of force by analysts, goes in line with the longer trend of an increase in Chinese influence in Eastern Europe and in Serbia in particular.

China provided support to Serbia during the COVID pandemic and Serbia is by far the largest recipient of Chinese investment in the Balkans. While Chinese investment in Serbia is still negligible compared to the EU – 70 per cent of FDI in Serbia has come from the EU – China has been willing to invest in the more controversial projects, significant for Serbia’s economy.

Chinese investment in Serbia also receives extensive coverage in the pro-government media. A 2020 poll by the Institute for European Affairs showed that 40 per cent of Serbian citizens [wrongly] consider China their largest donor. Only 17.6 per cent thought it was the EU, with 14.6 per cent naming Russia.

The media has more recently hailed a “friendship of steel” between the two countries and has retranslated China’s opposition to “external forces exerting political pressure on sovereign countries, and … coercing other countries into taking sides”, referring to EU pressure on Serbia to follow Western sanctions against Russia.

Serbian President Aleksandar Vučić has defended Belgrade’s decision to buy Chinese weapons and responded to criticism from Montenegro’s President Milo Đukanović and Kosovo leader Albin Kurti, stating that “it is better to be a lone wolf than a hyena or a flying fly”. He accused both politicians of “spreading hatred towards Serbia”.

Yet Serbia does not seem to be making a complete turn towards China. The day after the reported delivery of the Chinese weapons systems, the state broadcaster, Radio Television of Serbia, RTS, announced the planned acquisition of French-made Rafal fighter jets, marking a potential break with a 60-year-old tradition of using Russian-produced MiG fighters.

RTS opined that “Serbia is making a complete turn when it comes to combat aviation and is switching to Western technology”, also quoting a former pilot as saying: “The budget [rather than friendship with Russia or France] will decide [the matter]; pen and paper will decide.”

Serbia has so far resisted the pressure to impose sanctions on Russia, although it supported UN resolutions condemning Russia’s actions in Ukraine and voted for Russia’s suspension from the UN Human Rights Council. While initially refraining from definitive statements, when speaking of the fact that Serbia is the only European country not to impose sanctions, President Vučić recently said that Serbia “will see that it stays that way”.

His position may be explained by the significance of pro-Russian feeling in Serbia. Over 60 per cent of respondents to a Voice of America poll blamed NATO for the current events in Ukraine, while only 3.5 per cent blamed Russia.

The recent parliamentary elections in Serbia, Vučić himself noted, saw a shift to the traditionally pro-Russian right.

Gas prices are another factor. Serbia may expect to receive a good price when renewing a 10-year gas supply contract with Russia later this year.

The government may use both the election results and the subsequent government formation process as an excuse to continue not imposing sanctions on Russia, hoping that the crisis in Ukraine comes to an end meanwhile.

The EU has so far shown tolerance towards Serbia’s position. While reiterating that it still expects Serbia to join the sanctions, Brussels sided with Belgrade in its dispute with Kosovo over how Serbs in Kosovo should vote in Serbia’s 3 April elections. According to Serbia’s state-owned Tanjug news agency, the EU will exclude Serbia from any sanctions relating to the oil imports from Russia.

Still, it cannot be ruled out that Serbia does impose sanctions on Russia, due to significant EU pressure. Some analysts assume this is likely to be a slow but a sure process, especially if the situation in Ukraine remains the same.

With its decades-long history of non-alignment, which is still widely supported by the population, and as a major player in the Balkans, Belgrade might try to use its position to try to get the best deal from all the big powers. Only time may show whether such a strategy is successful.

Serbia’s European alliance, supported by investment from the EU and by a significant share of the population, may survive the current crisis.

Its Russian alliance may possibly do the same, boosted by cooperation on the issues of gas and Kosovo, and by pro-Russian sentiments among the population and among the elites.

However, in the long run, the current pressure seems likely to move Belgrade towards enhanced ties with China.