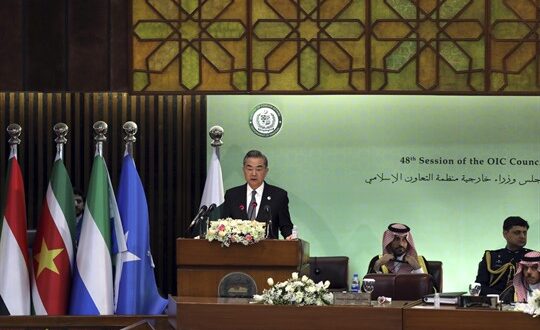 China’s positioning with regard to Russia’s invasion of Ukraine has been in the spotlight in recent weeks, and it is likely to be a central topic of discussion at the China-European Union Summit scheduled to be held this Friday. But for Beijing, which is seeking to mend fences and shore up ties with countries in South Asia, diplomacy closer to home remains a priority as well.

Last week, Chinese Foreign Minister Wang Yi completed a six-day tour of the region, including unannounced stops in Afghanistan, India and Nepal. Wang began his trip in Islamabad, where he met with Pakistani Prime Minister Imran Khan and attended a foreign ministers meeting of the Organization of Islamic Cooperation, or OIC, as a special guest. The meeting between Wang and Khan, which featured both sides emphasizing their “iron-clad friendship,” ended with the signing of five agreements to strengthen bilateral cooperation in the areas of agriculture and education. Upon departing Islamabad, Wang made a brief stop in Kabul, which marked the highest-level visit by a Chinese official to Afghanistan since the Taliban retook power last year.

But while Wang was met with a warm welcome from his Pakistani and Afghan hosts, he arrived to a chilly reception in India, underscoring the difficulty of his task in New Delhi. The surprise visit, which was kept a secret at Beijing’s request, marked the first by a Chinese foreign minister to India since deadly clashes in 2020 in the Ladakh region of Kashmir strained diplomatic ties between the two neighboring countries.

The frosty atmosphere surrounding Wang’s visit underlines the difficulty lying ahead for efforts to mend ties between Beijing and New Delhi. It likely did not help that even prior to his arrival in New Delhi, Wang’s remarks at the OIC meeting—where he said that China shares the organization’s “hope” for Kashmiri self-determination—drew a swift backlash from Delhi, which rejected the “uncalled reference” to a territorial dispute India regards as an internal matter.

For its part, the Chinese readout of the talks emphasized the commonalities between the two neighboring powers. Both are walking a similar diplomatic tightrope on the war in Ukraine by refusing to explicitly condemn Russia’s invasion and having abstained from a United Nations General Assembly resolution reprimanding Moscow for it. As a result, Chinese state media outlets have framed the war as having created an opportunity for convergence between the two countries, as well as for India to reconsider the terms of its relations with the West.

But the unresolved border dispute remains a thorn in their relationship, as illustrated by Wang’s meeting with Indian officials. Though Wang suggested putting the issue “in a proper place” and not letting it define or affect bilateral relations, the lack of a joint statement, which typically follows such bilateral meetings, underscores the lukewarm response from India to the idea of decoupling the dispute from the broader relationship.

“If you ask me if our relationship is normal today, my answer to you is, No, it is not and it cannot be normal,” Indian External Affairs Minister Subrahmanyam Jaishankar told reporters in a media briefing afterward. “Surely the presence of a large number of troops in contravention of agreements is abnormal.” Jaishankar added that India wants “a stable and predictable relationship, but restoration of normalcy will require a restoration of peace and tranquility.” His blunt remarks suggest that a thaw in the relationship is unlikely.

According to several analysts, the unusual secrecy surrounding parts of Wang’s South Asian tour suggests that Beijing is concerned about diplomatic isolation over its strategic partnership with Moscow, but at the same time remains uncertain about its ability to rally its regional neighbors to its side amid a difficult international environment. “China urgently needs understanding and support on Ukraine at the United Nations and elsewhere amid fears of Western encirclement,” Gu Su, a political analyst at Nanjing University, told South China Morning Post. Gu added that Beijing wants to ensure that its international image is not further tainted by its position on the Ukraine crisis ahead of a major leadership reshuffle inside the Chinese Communist Party later this year. “But it is a tough job and Beijing is clearly unsure of the outcome and concerned about possible mishaps,” he said.

Ukraine will certainly be on the agenda Friday, when the long-delayed China-EU Summit will take place virtually. Relations between Beijing and Brussels have soured in recent years due to tit-for-tat sanctions by both sides over China’s crackdown on Uyghur ethnic minorities in Xinjiang as well as its campaign of economic coercion against Lithuania. Though discussion of the stalled Comprehensive Agreement on Investment, or CAI, may resume, the EU’s most urgent priority right now is marshalling support for Ukraine to fend off Russian aggression.

The bloc is expected to support Washington’s position cautioning China over stepping up any substantial assistance to Russia beyond rhetorical support, as agreed between EU leaders and U.S. President Joe Biden in last week’s EU leaders summit. “In that war, there can be no so-called neutrality,” Nicolas Chapuis, the EU’s top envoy to China, emphasized to dozens of top diplomats at a recent event in Beijing.

Few believe that EU pressure will be decisive in shifting Beijing’s calculus on the war in Ukraine. “It would be futile for Europe to try to get any guarantees or reassurances from Beijing on its conduct regarding Russia’s war,” Thorsten Benner, director of the Global Public Policy Institute in Berlin, told South China Morning Post. “But,” he added, “Europe should make it clear that Beijing will pay a price in terms of a significant deterioration of EU-China relations if it continues to choose to support Putin.”

Despite issuing repeated assurances that they would not implement a lockdown—and even arresting two city residents for spreading rumors that one was imminent—local officials in Shanghai made a U-turn last Sunday and ordered a snap two-stage lockdown that would see residents on each side of the Huangpu River confined to their homes for five days while undergoing mass testing for the coronavirus. The announcement came amid growing skepticism over the sustainability and cost of China’s “zero-COVID” policy. Last week, a 49-year-old nurse died from asthma after she was turned away by two hospitals, including the one where she worked, as their emergency rooms were closed for coronavirus disinfection.

The Solomon Islands signed a memorandum of understanding with China on policing cooperation earlier this month, while a broader security treaty covering military cooperation will be proposed to its Cabinet, a government official from the Pacific island confirmed. A leaked draft of the treaty revealed that it would allow China’s police and military forces access to the Solomon Islands to protect Chinese infrastructure there. Australia, New Zealand and the United States have expressed concern about the agreement.

Two top British judges have resigned from Hong Kong’s highest court, in a move that brings the city’s record of judicial independence and other civil liberties under further scrutiny. “I have concluded, in agreement with the government, that the judges of the Supreme Court cannot continue to sit in Hong Kong without appearing to endorse an administration which has departed from values of political freedom, and freedom of expression,” Lord Robert Reed, who also serves as the president of Britain’s Supreme Court, wrote in a statement announcing his resignation from Hong Kong’s Court of Final Appeal. British Foreign Secretary Liz Truss expressed her support for the decision. “The situation has reached a tipping point where it is no longer tenable for British judges to sit on Hong Kong’s leading court, and would risk legitimizing oppression,” she wrote.

China is planning new curbs on the country’s $30 billion livestreaming industry, which would include a daily limit on users’ spending on digital tipping and the amount livestreamers can receive in payment from fans, as well as tighter censorship over digital content, the Wall Street Journal reported, citing people familiar with the matter. The goal of the regulations is ostensibly to combat fraud, mobile phone addiction and unhealthy online spending. But the move would renew China’s regulatory crackdown on local tech giants, which has sent shockwaves through the industry and hit investor confidence in Chinese stocks.

Post Views: 81
Previous The U.S. Should Compete With China and Russia—but Wisely
Next China Plays the Waiting Game on the Russia-Ukraine Crisis