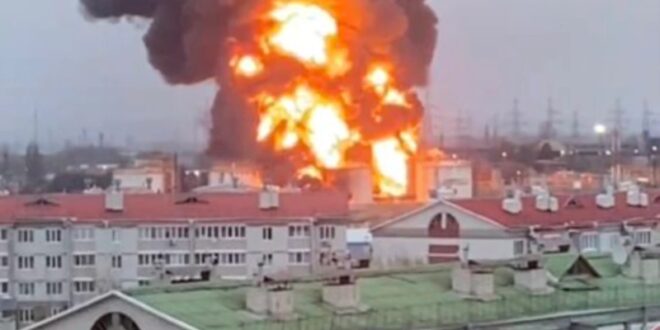 A Shadow War On The Russian Side Of The Border – Analysis

Early in the morning on April 27, a drone crashed in a muddy field southwest of the Russian city of Kursk, around 100 kilometers northeast of the border with Ukraine. Locals tracked down the destroyed device not long after, and posted photographs to Telegram and other social media.

The device appeared to be a Bayraktar TB2, a versatile Turkish-designed unmanned aerial vehicle capable of long-distance surveillance as well as dropping guided bombs or firing anti-tank missiles.

It wasn’t the Russians who were flying the drone.

And that wasn’t the only unusual thing that happened in that part of Russia that same morning: There were also two unexplained explosions at Russian military and industrial sites — one in Kursk and one near Voronezh, not far to the east.

Nor does it appear to have been Russians who flew low-altitude attack helicopters in the pre-dawn hours of April 1 around the time that a fuel depot exploded less than 50 kilometers from the Ukrainian border.

Since February 24, Russian forces have laid waste to towns and cities in northern, eastern, and southern Ukraine, killing thousands of civilians and forcing millions to flee in a war that prompted the West to punish Moscow with sanctions and send massive supplies of military aid and support to Kyiv.

Ukrainian forces thwarted an offensive aimed at taking Kyiv in the war’s early weeks, prompting Russian troops to withdraw from close to the capital. Much of the fighting is now focused on the region known as the Donbas and other areas in the east and south.

Away from the active battlefronts within Ukraine, though, there’s a less bloody, less prominent front in the two-month-old war, a shadow campaign that has included attacks on military and industrial targets in Russia itself.

It’s not clear how many incidents have occurred, or whether they resulted from air strikes, or missiles, or sabotage. An unofficial tally by RFE/RL, based on open-source reporting, counts at least a dozen since the war’s beginning.

The preponderance of evidence points directly at Ukraine, but the attacks have gone largely unheralded by Kyiv.

They’ve also been played down by Russia — for reasons that, analysts said, include embarrassment that its formidable military is unable to protect the country from being attacked from a foreign location.

Some of the incidents may also have a more mundane explanation, said William Alberque, director of strategy, technology, and arms control at the London-based International Institute for Strategic Studies: negligence or corruption in Russia and its armed forces.

“On the one hand, you have to understand that Russia is moving ammunition at scale, so accidents are going to happen,” Alberque told RFE/RL. “But once you get over, what, 22 accidents in 60 days? Then you are also going to be looking at enemy action.”

Ukrainian officials, including some of President Volodymyr Zelenskiy’s top advisers, have merely winked at the prospect that Ukraine was willing to attack Russia itself, even as Ukrainian forces are dwarfed by Russia’s more powerful military.

“If you (Russians) decide to massively attack another country, massively kill everyone there, massively crush peaceful people with tanks, and use warehouses in your regions to enable the killings, then sooner or later the debts will have to be repaid,” presidential adviser Mykhaylo Podolyak said in a post to Telegram hours after the explosions.

“Karma is a cruel thing,” he wrote.

The incidents have been varied in their nature. One recurring theme is Turkish drones.

Ukraine has invested heavily in Turkish technology; Bayratkars are among the most advanced drones on the market. During the 2020 war over the disputed Nagorno-Karabakh region, Azerbaijan devastated Armenian forces and their allies mainly due to Bayratkars.

In October, four months before Russia sent thousands of troops into Ukraine, Ukrainian commanders used a Bayratkar to attack an artillery position of Russia-backed separatists in the Donbas in retaliation for shelling from those forces. Russia has complained publicly about Turkey, a NATO ally and general thorn in Moscow’s side in the Black Sea region, supplying the drones to Ukraine.

Ukrainian commanders have used the Turkish drones against Russian forces within Ukraine. And judging by photographs posted to social media accounts and claims from Russian authorities, they are being used routinely to fly over Russian territory.

Two days before the Bayratktar crashed near Kursk, another Turkish drone came down in the same region. Purported photos of the drone showed identification numbers and a Ukrainian flag stenciled on a wing.

On that same day, April 25, residents of Bryansk, which is about 155 kilometers northeast of the Ukrainian border, awoke to dawn skies blackened by thick smoke from a major oil pipeline that had been set ablaze. Regional Governor Aleksandr Bogomaz said a fire had broken out at the Transneft-Druzhba oil depot but no cause was given, and it was unclear if the Bayratktar could have been used to fire a missile.

Russian bloggers on Telegram and elsewhere said two oil tanks had been hit by explosive devices.

Again, Ukrainian authorities made no claim of responsibility, and Russian officials did not publicly accuse Kyiv or assign blame for the fire.

Lieutenant General Ihor Romanenko, a former deputy chief of Ukraine’s General Staff, predicted there would be more such strikes in the future.

“We will not just watch them hit our railway stations, fuel and lubricant processing plants, and so on,” he told RFE/RL’s Ukrainian Service on April 25. “The time has come for this to happen to them as well.”

Nor are the attacks a new phenomenon.

The day after the February 24 invasion began, a tactical ballistic missile hit the tarmac at a Russian air base in Millerovo, less than 10 kilometers from the Ukrainian border. Two Su-30 jet fighters were destroyed.

Again, Ukrainian officials said little about the incident. But Yuriy Butusov, the chief editor of the Ukrainian news site Censor.net, stated flatly that it was a Ukrainian strike.

“In response to the bombing and rocket attacks on Ukrainian cities, the 19th Missile Brigade of the Armed Forces of Ukraine struck hit the Russian air base Millerovo with a Tochka-U ballistic missile,” he said in a post to Facebook.

Yury Fyodorov, a Russian military analyst, said it was wholly plausible that Ukrainian intelligence was behind the incidents.

“Why not? After all, Russia is absolutely mercilessly bombing Ukrainian cities, warehouses, railway facilities, [civilians], and it feels entitled to do this,” he told Current Time. “War is war. And these things need to be answered in whatever ways possible.”

To date, one of the most striking incidents known to have occurred happened on April 1, when a fuel depot exploded in Belgorod, less than 50 kilometers from the border, injuring two people. Multiple videos posted to Telegram showed what appeared to be two Mi-8 helicopters flying low over villages in the vicinity shortly around the time of crash. The regional governor said the helicopters were from Ukraine.

That same day, a rocket exploded in a different part of the Belgorod region; open-source researchers said the trajectory of the rocket, and the fact that it was a model that is not believed to be in Ukraine’s arsenal, led them to believe it might have been an errant Russian missile.

“How much of this quote-unquote enemy action is due to the fact that the entire Russian system is sowed with incompetence and corruption?” Albeque said.

“Where is all this vaunted electronic warfare? Russia was supposed to have some of the world’s leading electronic warfare capabilities?” he said. “And then we have drones that are flying over these ammo dumps and oil storage depots: what the hell is that about?”

While Western officials have voiced concerns about the war expanding beyond Ukraine’s borders, potentially into NATO territory, some have also effectively endorsed Ukrainian efforts to attack Russian targets within Russia itself.

It is “completely legitimate for Ukraine to be targeting in Russia’s depth in order to disrupt the logistics that if they weren’t disrupted would directly contribute to death and carnage on Ukrainian soil,” British armed forces minister James Heappey said in an interview with Times Radio on April 26.

During an appearance before a Senate committee on April 27, U.S. Secretary of State Antony Blinken was asked how the United States would view Ukrainian attacks inside Russia.

It was up to Ukraine, he said, to do everything “necessary to defend against Russian aggression.”

The Ukrainians are being opportunistic, Alberque said: Even when explosions can blamed on negligence, they’re happy to wink and nod, and let the world think they are the result of a special operation. And the Russians are happy in some cases to blame the Ukrainians, rather than admit corruption involving Russian civilian or military authorities could be to blame.

The Ukrainians “are trying to target, to get all the ammunition depots, and fuel depots. They are absolutely doing what they can to hit those facilities as much as possible,” he said. But he said it would be a mistake to ascribe every fire or blast in Russia to Ukraine.

“I don’t want to take credit from the people, the Ukrainians, who are doing actual sabotage. That’s happening. Period.” he said. “But let’s also not present Ukraine as some super-Ninja force that is slaying dragons way out in Siberia.”