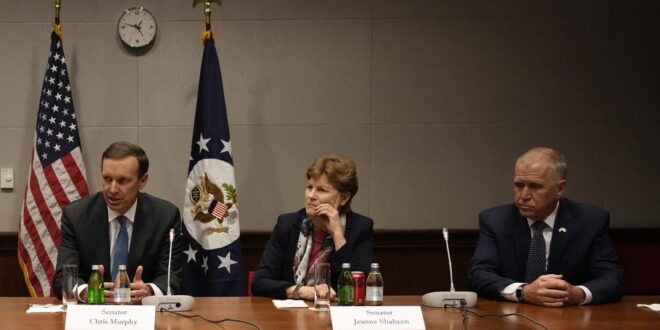 Rebuilding US relationship with Russia will require ouster of Putin, senator says

The U.S. will not be able to build a productive relationship with Russia until its current autocratic regime is dismantled, a Republican member of the Senate Armed Services Committee said Monday.

Russian President Vladimir Putin is not fit to serve, said Sen. Thom Tillis of North Carolina, and any opportunity to restore ties with Russia will need to be predicated on the next leader of the country. Tillis’s comments at an Atlantic Council event Monday follow a declaration from President Joe Biden in March that Putin “cannot remain in power.”

“I do believe at some point, for the good of the Russian people and for world order, that there needs to be a change of regime in Russia,” Tillis said. “Hopefully [it’s to] someone who works more on democratization and working and behaving properly in his neighborhood.”

The White House quickly walked back Biden’s off-the-cuff remark, which the president added to the end of a speech during his recent trip to Poland. But Tillis said Monday that Putin’s decision to launch a full-scale invasion of Ukraine in February showed Russia’s longtime ruler cannot be trusted and will not negotiate in good faith.

“He’s exposed himself greatly with his actions in Ukraine,” he said. “I think he’s arguably guilty of war crimes.”

Putin has also demonstrated an inability to govern his own people, Tillis argued, by choosing to spend billions to fund the war in Ukraine while people in Russia’s poorest regions starve.

“Clearly the most important thing is to get the Ukraine fight right. But we should also use this moment to re-resource ourselves in and around Russia when it comes to all the nonmilitary ways that they have utilized to destabilize countries on their periphery,” Murphy said. “That, to me, should be at the heart of a new Russia policy.”

Murphy said the U.S. had “badly mis-resourced” its approach to Russia and should have been “more serious” about supporting independent journalism in Russia and its neighboring countries and fighting Russian-funded corruption, bribery and intimidation. The U.S. should have also spent more money to help nations wean themselves off Russian gas and oil, he said.

“We have the opportunity right now to work with our European partners and others on Russia’s periphery to permanently cut off Russia’s energy flows to neighbors,” Murphy said. “That makes the world more stable, and it gives Russia less opportunity to punish neighbors for supporting Ukraine.”

Murphy and Tillis called for bolstering U.S. presence in the Balkans, where they traveled with a congressional delegation last month. The region remains fragile despite the ascension of several countries into the European Union and the NATO military alliance, Tillis said.

Murphy expressed concern about the recently reelected Serbian President Aleksandar Vučić, who has cozied up to Putin and made “very dangerous overtones to carve up” neighboring Bosnia and Herzegovina. The U.N. Security Council is expected to decide this month whether to extend the deployment of a multinational stabilization force that includes U.S. troops in Bosnia and Herzegovina past November.

“This is not a region of the world that gets headlines, it’s not a place that gets lots of attention from Congress but if we don’t get our policy right, if we don’t increase our security footprint in the Balkans — particularly in Bosnia — we could be dealing with another violent crisis sooner than we had anticipated,” Murphy said.

The Balkans could become a prime target for Putin as he gets backed into a corner in Ukraine and looks for other places in the region to make trouble for the U.S., he said. Congress must be able to “walk and chew gum at the same time” when it comes to arming Ukraine against Russia while weakening Putin’s ability to meddle in other areas, Murphy added.

The $33 billion supplemental aid package that the White House requested for Ukraine last week will go a long way toward that goal, the senators said. They want to see the money spent largely on weapons and humanitarian aid but also economic assistance to prop up the leadership of Ukrainian President Volodymyr Zelenskyy and make certain his government survives.

“The Biden administration is answering the call for the moment and hopefully Congress will step up in the next few days,” Murphy said.