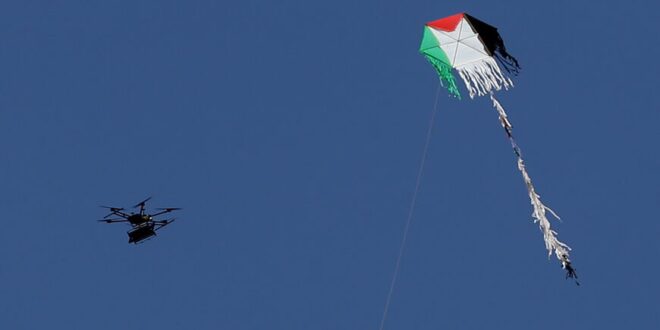 As the Palestinian factions in the Gaza Strip compete to develop new advanced weapons, the Islamic Jihad’s military wing announced for the first time a new drone capable of carrying small-sized missiles.

Al-Quds Brigades, the military wing of Islamic Jihad, announced April 28 having locally manufactured, for the first time, a new drone it called the “Jenin drones” to carry out attacks against Israel.

Islamic Jihad made the announcement in a video posted on its website, showing an earlier version of the new drone, which it had used against Israeli military vehicles stationed near the border with Gaza in September 2019. The video footage shows the drone dropping an explosive device from a medium altitude range, before returning to the Gaza Strip safely.

Later, the video shows members of the brigade equipping the drone with small-sized missiles at the headquarters of Al-Quds Brigades, showing that the drone is now able to carry more advanced military bombs than before.

In another video released April 28, on the eve of International Quds Day, which falls on the last Friday of Ramadan every year, Al-Quds Brigades’ spokesman Abu Hamza said that the Jenin drone became part of the brigades’ air force that Islamic Jihad continues to develop inside the besieged Gaza Strip since 2007.

Abu Hamza continued, “Three years after using the drone in Gaza its capacity today is not the same as it was three years ago. The armed Palestinian resistance possess defensive and offensive capabilities.”

This is the first time that Al-Quds Brigades announces the introduction of drones to its own arsenal to target Israeli military sites at the Gaza border.

Izz ad-Din al-Qassam Brigades, Hamas’ armed wing, announced during the May 2021 conflict with Israel the use of the locally made drone known as Shehab.

Al-Qassam Brigades first revealed the use of Palestinian-made drones — dubbed “Ababil 1” — during the confrontation with Israel in the 2014 war. Back then, however, it seemed the announcement was more of a propaganda.

Two years later, on Dec. 15, 2016, unidentified gunmen shot dead Tunisian engineer Mohamed Zouari, who specialized in the manufacture of drones. The Israeli Mossad turned out to be behind the assassination of Zouari over his role in developing drones for military purposes for Hamas.

Israel sees the Palestinian drones as another threat, in addition to the rockets fired from the Gaza Strip and the military tunnels.

In April, Israeli Prime Minister Naftali Bennett announced that the Israeli army would deploy an experimental laser interception system on the Gaza border to intercept rockets, anti-tank missiles and unmanned aerial vehicles (UAVs). This system is called the “Iron Beam.”

Bennett made the announcement in an April 14 tweet. “This may sound like science fiction, but it’s real,” he wrote, describing the new technology as a “game changer.”

He continued that the laser system is “the world’s first energy-based weapons system that has proven to actually work. The Iron Beam’s interceptions are silent, they’re invisible and they only cost around $3.50.”

The defense system is said to be deployed on land, in the air and at sea, according to Republic World.

It seems the Islamic Jihad’s announcement on the eve of International Quds Day came as an indirect message to thank Iran for its support. Quds Day was initiated by the late leader of the Iranian Revolution, Ayatollah Khomeini, in 1979 to be celebrated annually on the last Friday of Ramadan, in support of Palestinians against the Israeli occupation.

On April 29, thousands of people took to the streets simultaneously in Tehran and the Gaza Strip, organized by Islamic Jihad, to commemorate International Quds Day, after a two-year halt due to the coronavirus pandemic.

While Iran supports the Houthis in Yemen and Hezbollah in Lebanon with Iran-made drones, it backs the Palestinian factions on the logistic and moral levels due to the Israeli siege that has been imposed on Gaza since 2007.

The blockade, which prevented Iranian weapons from entering the enclave, has pushed Hamas and Islamic Jihad to manufacture drones locally, using the knowledge and support provided by Iran and other countries.

The types of drones in Gaza are divided into reconnaissance and combat drones.

Military analyst and former PLO artillery unit commander Wasef Erekat told Al-Monitor, “The resistance factions in Gaza have managed to manufacture a large number of UAVs, some of which collect images and information about the Israeli forces deployed on the borders. These can carry 10-20 kilograms [22-44 pounds] of explosives. Another type of locally made drone can carry up to 200 kilograms [441 pounds] of explosives.”

He added, “There is a remarkable development in the types of Palestinian drones, some of which can reach longer distances and carry explosives. They have a higher efficiency than incendiary balloons that were launched from Gaza and disturbed Israel over the past years.”

Erekat said that the Israeli army has repeatedly intercepted several drones on the Gaza border while they were on reconnaissance missions to collect information, whether for the benefit of Hamas or Islamic Jihad.

He concluded, “Israel is trying to find out the capabilities of these drones, and to pursue manufacturers and sources of information. Yet it remains unable to follow up on their development, which is carried out in absolute secrecy.”