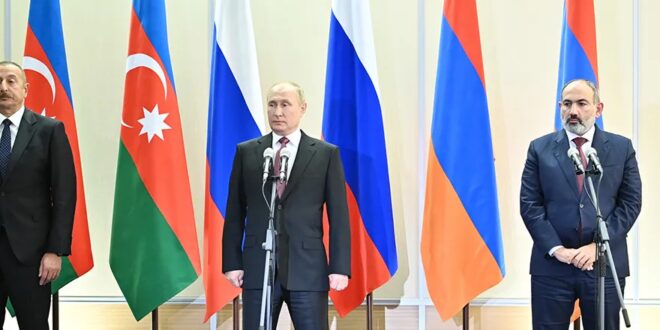 Russia and Turkey Seek to Reduce Tensions in the South Caucasus

Both powers are fostering a reconciliation between Armenia and Azerbaijan to promote greater stability in the region.

Although these hostilities heightened the risk of an all-out border conflict between Armenia and Azerbaijan, both parties swiftly pulled back from the brink and engaged in negotiations. Prior to the March escalations, Azerbaijan presented Armenia with a five-point normalisation plan, which called for mutual respect for territorial integrity, abstention from threats, border demarcations and open transportation links. Azerbaijani media outlets interpreted this plan as a recognition of Azerbaijan’s control over Nagorno-Karabakh in exchange for security guarantees for ethnic Armenians. Following the release of this plan, France, as co-chair of the OSCE Minsk Group, endorsed peace talks between Armenia and Azerbaijan. On 6 April, Armenia’s President Nikol Pashinyan and his Azerbaijani counterpart Ilham Aliyev held talks in Brussels, and Aliyev subsequently claimed that Armenia was open to accepting the five-point plan.

Russia and Turkey would welcome a resolution of historical tensions between Armenia and Azerbaijan. By regularly speaking with Pashinyan and Aliyev, Russian President Vladimir Putin has tried to facilitate a final settlement, which would prevent the flare-up of an inopportune conflict in the South Caucasus. Turkey sees the easing of tensions between Armenia and Azerbaijan as key step towards its South Caucasus integration plan, which has been accompanied by a thaw in relations between Ankara and Yerevan. These high stakes explain why Russia and Turkey are paying close attention to South Caucasus tensions, even as war continues to rage in Ukraine.

Russia’s invasion of Ukraine and the corresponding escalation of tensions in the South Caucasus have plunged its relationships with Armenia and Azerbaijan into a state of uncertainty. Armenia abstained from a 2 March UN General Assembly (UNGA) resolution that condemned Russia’s war with Ukraine, and broke with the Collective Security Treaty Organization (CSTO)’s pro-Russian consensus by staying absent from the 7 April UNGA vote to suspend Russia’s UN Human Rights Council membership. Armenia’s neutrality differs markedly from its support for Russia following the 2014 annexation of Crimea, and reflects Yerevan’s dissatisfaction with Moscow’s inadequate support against Azerbaijan during the 2020 war. Russia’s January 2022 leadership of a CSTO ‘peacekeeping operation’ in Kazakhstan contrasted markedly with its denial of Armenia’s requests for CSTO aid and created deeper frictions between the two countries.

Although Aliyev visited Moscow on 22 February and signed a declaration that brought Azerbaijan–Russia relations ‘to the level of an alliance’, Azerbaijan has mirrored Armenia’s neutrality on the war in Ukraine. While much attention has been afforded to Azerbaijan’s potential to replace Russian gas as a market supplier to Europe, Azerbaijan’s plans to increase gas exports from 8.2 to 11 billion cubic metres are hardly a game-changer. Azerbaijan’s escalatory moves in Nagorno-Karabakh have been a more significant source of tension with Russia. On 26 March, the Russian Ministry of Defence accused Azerbaijan of entering the Russian peacekeeping mission’s zone of operation, and chastised Baku for using Turkish Bayraktar TB-2 drones in Nagorno-Karabakh. Russian MP Mikhail Delyagin’s denunciation of Azerbaijan as a ‘satellite of the Americans’ and ‘Turkish proxy’ – which corresponded with a threat to launch a nuclear strike on its energy facilities – was disowned by the Kremlin, but added to the atmosphere of tension between Moscow and Baku.

While Russia would like to reverse these negative trends in its relationships with Armenia and Azerbaijan, its immediate goal is to mitigate the risk of a new war in the South Caucasus. Federation Council Chair Valentina Matviyenko expressed support for a peace agreement, and Putin has urged Pashinyan to implement trilateral agreements on Nagorno-Karabakh. Russia’s push for peace in the South Caucasus is especially timely, as its military presence in the region has been reduced to support the war in Ukraine. Russia already reorganised 1,200 to 2,000 troops from Georgia into three battalion tactical groups, which were dispatched to Ukraine in early April, and could conceivably draw manpower from its 10,000 troops in Armenia.

In the long run, Russia hopes that a de-escalation of Armenia–Azerbaijan tensions will add new energy to its 3+3 diplomatic format in the South Caucasus. This 3+3 format, which consists of Georgia, Azerbaijan and Armenia, together with their ‘three big neighbours’, Russia, Turkey and Iran, seeks to promote regional economic connectivity and ameliorate tensions over the Caspian Sea. These objectives might be overly ambitious. Turkey’s refusal to sanction Russia over its war with Ukraine has kept the format afloat. Georgia’s short-term participation is highly unlikely, especially if the breakaway state of South Ossetia takes steps to unite with Russia, and this could blunt the format’s efficacy as a regional integration body.

Turkey’s Perspective on an Armenia–Azerbaijan Reconciliation

Since the end of the Nagorno-Karabakh War in November 2020, Turkey has pursued a policy of deconfliction with traditional rivals and relied more extensively on diplomatic power projection. Turkey’s de-escalation of tensions with regional adversaries, such as Egypt, Israel, Saudi Arabia and the United Arab Emirates (UAE), as well as Mediterranean foes such as Greece and France, signifies this change in tack. This policy shift has extended to the South Caucasus. On 26 October, Turkish President Recep Tayyip Erdogan claimed that there were ‘no obstacles’ to normalisation with Armenia if Yerevan was serious about peace with Azerbaijan.

Turkey has also promoted the creation of a transport corridor to Azerbaijan, which would pass through Armenian territory. This corridor would provide much-needed economic stimulus for impoverished Kurdish regions in eastern Turkey, and ease landlocked Armenia’s dependence on trade with the Russian-led Eurasian Economic Union.

Erdogan’s rhetoric reaped dividends, as Turkey and Armenia appointed envoys in December to shepherd the normalisation process, and dialogue continued even as hostilities flared in Nagorno-Karabakh. After meeting with his Armenian counterpart Ararat Mirzoyan on 11 March, Turkish Foreign Minister Mevlut Cavusoglu pledged to support normalisation between Ankara and Yerevan. While no timetable has been set for normalisation, the restoration of flights between Turkey and Armenia suggests that both countries are interested in deeper engagement.

Turkey also regards a peace settlement in Nagorno-Karabakh as an essential component of deconfliction with Russia. Although Turkey’s supply of Bayraktar TB-2 drones to Ukraine has engendered tensions with Russia, Erdogan’s spokesman Ibrahim Kalin has highlighted Ankara’s ability to compartmentalise tensions with Moscow as a model for the West. The persistence of Russia–Turkey joint patrols in northern Syria symbolises Ankara’s commitment to compartmentalisation. The South Caucasus’s removal as a potential theatre for a Russia–Turkey proxy war would also erase a potential stumbling block to Turkey’s goal of brokering a peace settlement between Putin and Ukrainian President Volodymyr Zelensky.

While Armenia and Azerbaijan are still some distance away from a lasting peace settlement, both countries have retreated from the brink of hot war over the past three weeks. As Russia and Turkey’s interests hinge on promoting stability in the South Caucasus, they will continue to encourage an Armenia–Azerbaijan rapprochement and refrain from any provocative actions which could instigate a new conflict in Nagorno-Karabakh.