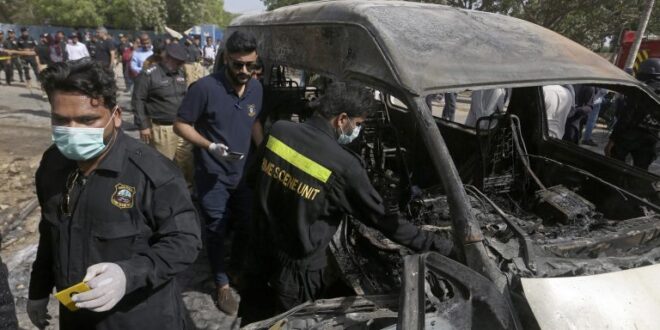 In late April, three Chinese nationals were killed in Karachi, Pakistan, in a suicide attack claimed by the Balochistan Liberation Army (BLA), designated by the United States as a Specially Designated Global Terrorists (SDGTs).

As China’s economic, political, and security inroads in Pakistan have increased, the BLA has also deliberately attacked Chinese nationals and interests in the country over the past few years.

The broad range of organizations that have targeted Chinese nationals and interests in Pakistan in recent years illustrate growing anxieties about Chinese engagement and human security risks.

The deepening Sino-Pakistan relationship serves Beijing’s geopolitical goals in the region, ranging from strengthening its historical alignment with Pakistan against India to establishing closer ties to a now Taliban-controlled Afghanistan.

On April 26, three Chinese nationals and a Pakistani driver were killed in a suicide attack in Karachi, Pakistan, which was claimed by the Balochistan Liberation Army (BLA). In an online statement, the BLA announced that the attack deliberately targeted Chinese nationals of the Chinese-funded Confucius Institute on the campus of the University of Karachi “to give a clear message to China that its direct or indirect presence in Balochistan will not be tolerated.” The group’s statement also claimed that the attack was carried out by the first female suicide bomber, Shari Baloch, belonging to the Majeed Brigade of BLA, illustrating the operational role women play in terrorist attacks. This recent attack comes after several similar attacks in recent years, in which Chinese nationals and interests have been the target of political violence and terrorism in Pakistan. This increase in attacks has occurred in tandem with the Chinese Communist Party’s (CCP) deepening economic and security ties with the Pakistani government. While deteriorating security conditions for Chinese nationals and interests in Pakistan could complicate Beijing’s economic aspirations in Pakistan, it could also provide opportunities for deeper Sino-Pakistan security cooperation.

The BLA is an ethnonationalist organization, designated by the United States as Specially Designated Global Terrorists (SDGTs), which opposes the Pakistani government and ultimately seeks to create a sovereign state that would include territories in Pakistan, Iran, and Afghanistan. Historically, the BLA has primarily targeted Pakistani security forces in the Balochistan province and Karachi, a key economic hub close to the province. However, as China’s economic, political, and security inroads in Pakistan have increased over the past years—especially since the launch of the $62 billion China-Pakistan Economic Corridor (CPEC) in 2013—the BLA has also deliberately targeted Chinese nationals and interests in the country. In November 2018, the group targeted the Chinese consulate in Karachi, and last year, a spate of attacks targeted Chinese workers in the city. Experts and analysts have noted that the use of suicide bombings by the BLA, like the attack last week, is a relatively new tactic for the group. Following last year’s reports that the BLA may also be seeking to cooperate more closely with other separatist groups in Balochistan, the most recent attack and the BLA’s threats to Chinese interests and nationals illustrate an increasingly concerning security situation for both China and Pakistan.

Several Pakistani militant groups have sought to actively target China’s interests and nationals in Pakistan. Last year, the Chinese Ambassador to Pakistan, Nong Rong, was nearly a casualty in a bombing targeting a hotel in Quetta carried out by the Pakistani Taliban, also known as the Tehrik-i-Taliban Pakistan (TTP). In June 2017, two Chinese nationals were kidnapped in Quetta, Pakistan, and later executed by members of the Islamic State. The broad range of organizations that have targeted Chinese nationals and interests in Pakistan in recent years illustrate the growing anxieties about Chinese engagement and the threat to Chinese interests and nationals. This trend is likely to increase in the coming years as China becomes more economically entrenched in Pakistan and explores deepening security cooperation while contending with the reality that the U.S. withdrawal from Afghanistan last year has created a more volatile security situation in the region. Indeed, some of the organizations that have targeted China in Pakistan are believed to partially operate out of Afghanistan, including the BLA and TTP.

Pakistan is one of the most enthusiastic partners in China’s ambitious foreign policy project, the Belt and Road Initiative (BRI), of which the CPEC is a cornerstone. As in other BRI-recipient countries, China’s economic inroads have also yielded increased political and security cooperation with the host governments. Chinese influence in BRI-recipient countries has also been reflected in the relative silence among these countries when it comes to the CCP’s genocide against Uyghur and other monitories in Xinjiang. A recent report by the Woodrow Wilson Center detailed how Uyghurs and other minorities are most vulnerable to detention or extradition in BRI-recipient countries in which China is the largest financial creditor, including Pakistan. In 2020, Beijing and Islamabad signed an agreement to enhance defense cooperation between the Chinese People’s Liberation Army (PLA) and Pakistani counterparts. In 2021, the two countries announced deeper counterterrorism cooperation. As security concerns for China in Pakistan will likely continue to grow as violence worsens, the Sino-Pakistan strategic military and security cooperation will continue to evolve in parallel. The deepening Sino-Pakistan relationship serves Beijing’s geopolitical goals in the region, strengthening its traditional alignment with Pakistan against India and deepening ties to a now Taliban-controlled Afghanistan.