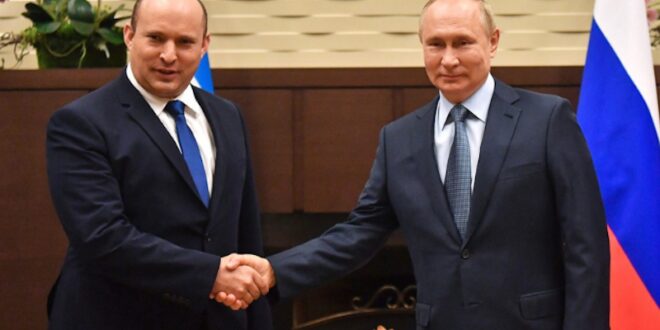 Israel’s rapidly deteriorating relations with Russia contain a message for other Middle Eastern powers: attempting to remain on the sidelines of the conflict in Ukraine risks falling in between the cracks.

Like Saudi Arabia, the United Arab Emirates, and Turkey, Israel has sought to maintain good relations with the United States and Russia despite Washington and Moscow’s principle of ‘you are either with us or against us.’

Ukrainian President Volodymyr Zelensky has good reason to apply the same principle even if Israel and Turkey have sought to use their good offices to mediate between the Ukrainian leader and President Vladimir Putin. They used their mediation to justify their failure to join US and European sanctions against Russia.

Mr. Zelensky this week called out his Turkish counterpart, Recep Tayyip Erdogan after Turkey announced plans to encourage as many Russian holidaymakers as possible to visit. The announcement came as a senior Russian tourism official said that less than half the 4.7 million Russians who travelled to Turkey in 2021 were likely to visit the country this year.

“This is not entirely fair, and that is why I draw Turkey’s attention to such processes. There is a need to choose,” Mr. Zelensky said a day after meeting in Kyiv with Ibrahim Kalin, one of Mr. Erdogan’s closest advisors.

So far, the Biden administration has been restrained in its response to a Saudi and Emirati refusal to increase oil production to reduce prices and help Europe ween itself off its dependence on Russian energy. However, there is little doubt that the administration will remember who its friends were in a time of need and who was not.

It’s a message that may be registering in Abu Dhabi. In late April, France’s TotalEnergies chartered a tanker to load Abu Dhabi crude in early May for Europe, the first such shipment in two years.

Despite hubristic remarks by Saudi Crown Prince Mohammed bin Salman in an interview in March with The Atlantic, relations between the kingdom, the UAE, and the United States have steered away from acrimonious public exchanges.

That has not stopped former officials from trading swipes.

Responding to former Secretary of State and presidential candidate Hillary Clinton’s suggestion that the US should use a carrot-and-stick approach to get the Saudis to boost oil output, former Saudi intelligence chief and ex-ambassador to the United States Prince Turki al-Faisal quipped: “We’re not schoolchildren to be treated with a carrot and stick. When we’re dealt with fairly and squarely, we respond likewise”.

Striking a less belligerent tone, Mohammed Khalid Alyahya, a Hudson Institute visiting fellow and former editor-in-chief of Saudi-owned Al Arabiya English, noted that “Saudi Arabia laments what it sees as America’s willful dismantling of an international order that it established and led for the better part of a century.”

Mr. Alyahya quoted a senior Saudi official as saying: “A strong, dependable America is the greatest friend Saudi Arabia can have. It stands to reason, then, that US weakness and confusion is a grave threat not just to America, but to us as well.”

Israel has not been afforded the luxury of more layered exchanges in its increasingly harsh tit-for-tat official verbal swaps with Russia.

Mr. Lavrov used that to justify describing as a “Nazi” Mr. Zelensky, who is of Jewish descent. The foreign minister went on to say that “the wise Jewish people said that the most ardent antisemites are usually Jews.”

In response, Israeli Foreign Minister Yair Lapid, whose grandfather died in the Holocaust, said in a tweet that “Lavrov’s remarks are both an unforgivable and outrageous statement as well as a terrible historical error. . Jews did not murder themselves in the Holocaust. The lowest level of racism against Jews is to accuse Jews themselves of antisemitism.”

Subsequently, Mr. Lapid added that “we are making every effort to maintain good relations with Russia, but everything has a border, and this time it was crossed. The Russian government should apologize to us and to all the Jewish people.”

Doubling down, the Russian foreign ministry accused Israel a day later of supporting neo-Nazis in Ukraine. The ministry said Mr. Lapid’s statements were “anti-historical” and “explaining to a large extent why the current Israeli government supports the neo-Nazi regime in Kyiv”.

Mr. Lavrov and the ministry’s remarks were the latest salvo in the Israeli-Russian spat. A day earlier, a Russian television station disclosed the identity of ten Israeli consular officials and security guards who were on the Polish-Ukrainian border to help Israeli nationals escape from the war-torn country and described them as mercenaries.

The disclosure came a day after media reports said that Israel had foiled an attempt to assassinate an Israeli consular employee in Turkey, an American general in Germany, and a journalist in France.

Israel has walked a fine line in crafting its management of the Ukraine crisis.

It rejected Ukrainian requests for arms sales, including its acclaimed Iron Dome anti-rocket system, and access to Israeli surveillance technology, while providing humanitarian assistance to the war-torn country.

Under pressure to get off the fence, Mr. Lapid sparked the deterioration of relations when in early April, he asserted that Russia had committed war crimes.

In a statement at the time, the Russian foreign ministry charged that Mr. Laipd’s remarks were “a poorly camouflaged attempt to take advantage of the situation in Ukraine to distract the international community’s attention from one of the oldest unsettled conflicts – the Palestine-Israeli one.”

Shortly after that, Russia’s ambassador to Israel, Anatoly Viktorov, told an Israeli television station that Israel and Russia were “still” friends but that Moscow expected a “more balanced (Israeli) position.”

To increase pressure on Israel, Admiral Oleg Zhuravlev, the deputy chief of the Russian Center for Reconciliation of the Opposing Parties in Syria, disclosed that a Syrian-operated, Russian-made Buk M2E air defense system had recently intercepted a guided missile fired from an Israeli F-16 fighter jet in Syrian airspace. The disclosure constituted a warning that Russia may no longer tolerate future Israeli strikes against targets in Syria.

“Israel risks falling off its carefully construed balancing act. Others in the Middle East still have some rope left. How much is the $64,000 question,” said a Western diplomat.

Post Views: 116
Previous Biden’s Brzezinski Plan For Russia
Next Ukrainianization of Europe Or Europeanization Of Ukraine