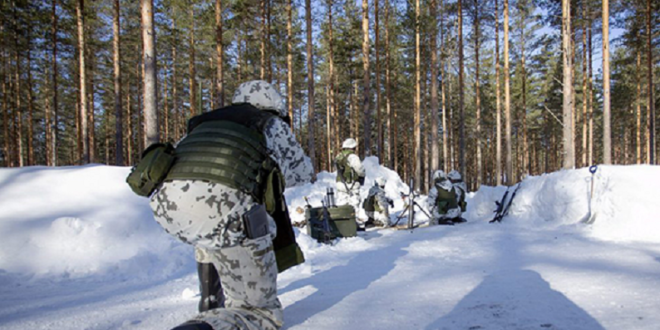 FAST THINKING: Why Finland and Sweden are feeling secure about NATO membership

It’s (almost) official. With Finland’s president and prime minister officially backing their country’s membership in NATO on Thursday—and Sweden expected to do the same shortly—the path now seems clear for both countries to formally apply for membership in the Alliance. How did they arrive so quickly at this juncture? And what opportunities and dangers lie ahead? We turned to our experts in Helsinki, Brussels, and Washington for answers.

With Finland and Sweden now on the cusp of formally applying to NATO, Chris says “what was impossible not six months ago is looking inevitable.”

Underscoring the magnitude of this geopolitical earthquake, Rachel adds that in Finland specifically public support for “NATO membership has hovered at around 20 to 30 percent throughout the years but has skyrocketed to over 70 percent since Russia’s invasion of Ukraine.”

But despite the speed of these developments, Chris, who is writing from Brussels, tells us that Thursday’s announcement has longer roots than it might seem: “There has been intensive work behind the scenes over the previous months, with the fruits of these efforts just now becoming public.” This includes British Prime Minister Boris Johnson’s pledge this week that his country will guarantee both Nordic nations’ security even before they formally join the Alliance.

“Expect similar statements soon from other nations,” Chris advises—the result of an “impressively choreographed campaign of messaging and shuttle diplomacy” to reassure publics and political establishments in Finland, Sweden, and across NATO.

From Russia—with a response?

Now, Chris says, the big unknown is how the Kremlin will respond. “The betting money is that Vladimir Putin is too committed and distracted in Ukraine to make much of a protest, except rhetorically.”
But he also reminds us that Moscow has long sounded off about this very step, which the Russian president sees as a clear security threat. Adding Finland, which shares an 830-mile border with Russia, to NATO “constitutes a strategic and operational calamity for Putin, and his instinct will be to lash out.”

Either way, there’s no stopping the NATO accession process now, Chris notes—although diplomats are likely working overtime. “I expect there is backchannel diplomacy underway from Helsinki and Stockholm to reassure the Kremlin of the ‘defensive’ nature of these impending decisions,” he says.

Still, says Rasmus, Russia’s “logic and sense of pride dictate that they will need to respond” in some form, which is why Finland and Sweden will need to “be extra alert during the coming months.”

Some analysts worry that one or more of NATO’s thirty national legislatures, which must all vote to approve of Finland and Sweden becoming NATO members, might try to tank the two countries’ bids. But Chris thinks that’s unlikely because Finnish and Swedish diplomacy in recent weeks “has resulted in quiet assurances on this front.”

“There is no way that Finland or Sweden take the step to apply for membership if there is concern about being denied,” Chris explains. “Even speculation that the US Senate could fail to ratify accession seems far-fetched. In the middle of Donald Trump’s anti-NATO presidency, North Macedonia’s membership was ratified by a 91-2 vote.”

But Rachel, in DC, argues that the US Senate does have an important role to play in assessing the security implications of Finland and Sweden becoming members. The Foreign Relations Committee’s Subcommittee on Europe and Regional Security Cooperation “should host an expert hearing in the coming weeks with witnesses who can discuss issues around enlargement, future force presence in the two countries, and the inevitable belligerence we can expect from Russia in response,” she proposes.
And Finland and Sweden have to work through their own domestic debates. Rasmus, based in Helsinki (and speaking for himself, not the Finnish government), notes that both countries “will need to shed the remnants of [their traditional] neutrality-based thinking” and on defense issues “shift from a national perspective to multinational perspective in strategic planning, capability development,” and so on. While such “a cultural shift” will “take some time,” he says, “it will happen.”

Post Views: 40
Previous Russia Crisis Military Assessment: How Ukraine is taking the fight to Russian soil
Next Will Putin use nuclear weapons in Ukraine? Our experts answer three burning questions.