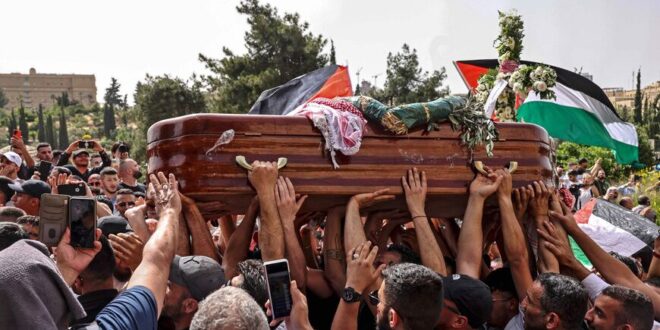 Palestinian television icon Shireen Abu Akleh was laid to rest in the Melkite Catholic Cemetery in Jerusalem’s old city Friday afternoon after an unprecedented attack by Israeli police at her funeral procession. Israeli security forces used stun grenades and tear gas and charged at pallbearers with horses and batons.

Israeli police suddenly attacked the huge crowd that had come to the French Hospital just outside New Gate. It was clear that the Israeli police were involved in an attempt to block and remove any signs of Palestinian nationalism. Israeli soldiers ripped off Palestinian flags that surrounded her and used tear gas to prevent pallbearers from marching with her body.

In the end, the coffin was put in a waiting hearse, and the Israelis tried to separate the vehicle carrying the coffin from the sea of people who had tried to take a last glimpse at a TV news idol who had become a household name since the second Palestinian intifada.

Hanan Ashrawi, former PLO Executive Committee member and spokesperson for Palestinians at the Madrid Peace talks, gave a running commentary on the Israeli actions, calling the storming of the St. Joseph’s hospital “obscene” and “sheer inhumanity on full display.”

On her Twitter account, she commented on the removal of Palestinian flags. “The insecurity of the oppressor is exposed: fear of our symbols, fear of our grief & anger, fear of our very existence.” Ashrawi informed her Twitter followers that “the funeral procession arrives at the Church, having defiantly marched through the Old City. That’s how, in her death, #Shireen energized the will of the #Palestinian people to liberate their city #Jerusalem.”

Israeli police were shown in a video that has gone viral removing Palestinian condolence flags from outside the church where Abu Akleh’s family sat in mourning.

Fadi Quran, Middle East campaign director at Avaaz (a global public site for petitions), tweeted that Israel has refused to allow Palestinians to even mourn. “Not only do they murder a symbol of our voice, but they also refuse to let us mourn her as is custom. They are attacking and arresting people carrying a Palestinian flag, which they have made illegal in Jerusalem and want to ban. Even the minimal humane act of allowing a nation to mourn and grieve at peace is prohibited for Palestinians. Yet despite this, the bells of all the churches of Jerusalem are ringing; people are defiantly carrying Palestinian flags in the old city.”

The fact that Abu Akleh was a Palestinian Christian was used by some Israeli soldiers to separate mourners and question participants as to whether they were Christian. If they were, they were allowed to proceed; if they were Muslim, they were denied.

According to Walid Omari, director of Al Jazeera office in Palestine, Israeli soldiers at the Qalandia checkpoint removed a blood-stained keffiyeh that was on her body.

The treatment indicated the Israeli government had given instructions to the police to deny any attempt to turn her funeral into a pro-Palestinian event. But this was not anything anyone could control.

The funeral did become a public event, as Abu Akleh was a well-respected, soft-spoken professional journalist who had become an icon to so many Palestinians. A sea of Palestinians wished to participate in the funeral and be with her body as she was taken to church and after church to the funeral.

Hadar Susskind, president and CEO of Americans for Peace Now, called the attack on the funeral procession horrific. “[It is] absolutely horrific. Waving Palestinian flags and chanting slogans (even if you don’t like them) is not illegal. Even if it was, it doesn’t justify this.”

A number of Israeli journalists were infuriated by the attack, as they saw a colleague whom they knew personally get gunned down.

Among those Israeli journalists was the editor of the Jerusalem Post Yaakov Katz, who tweeted: “What’s happening at Abu Akleh’s funeral is terrible. This is a failure on all fronts – operationally by the Israeli police who beat pallbearers & the gov’t which didn’t give order cops to back off. To think that just 2 days ago @naftalibennett claimed he rebuilt Israel’s PR system.”

After the funeral, Abu Akleh’s brother, Anton, who had arrived a day earlier from the United States, was called in for questioning by the Israeli police.