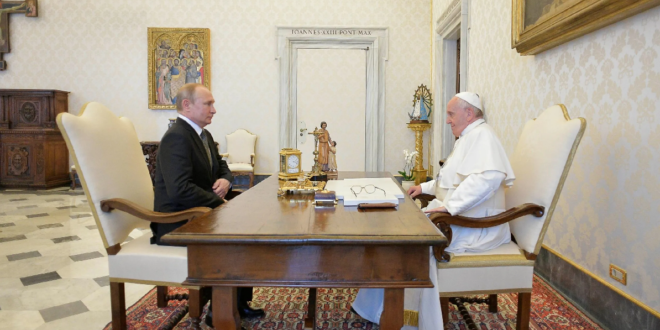 The holder of the highest seat in the Catholic Church, Pope Francis, said that the West is partly to blame for the Russian invasion of Ukraine.

In an interview with the Italian newspaper Corriere della Sera, the Pope said “that barking of NATO at the door of Russia” has pushed Vladimir Putin to invade Ukraine, which was not a part of the alliance.

“I have no way of telling whether his rage has been provoked, but I suspect it was maybe facilitated by the West’s attitude,” Pope Francis said.

China, a close strategic partner of Russia, has gone with the same narrative in the past – that the expansion of Western influence closer to Moscow, through increasing membership in NATO, has provoked Putin to launch an assault on Kyiv.

Since the start of the invasion in late February, the Pope has called for a peaceful resolution to the war and has condemned the violence happening on the ground. He, however, has neither explicitly called out Moscow nor Putin for launching its unjustified “special military operation.”

Now, the Holy See is pointing to NATO for taking in countries that were likely motivated to join the alliance because of national security concerns brought by Russia itself.

“The Russians have just found out that tanks are useless, and they might be developing new weapons. Wars are fought for this reason too: to test your arsenals,” he said.

Russian tanks are being wiped out on the battlefields of Ukraine. Ukrainian fighters have been using Western anti-tank weapons like Javelins, NLAWs, Panzerfaust 3s, and the locally made Stugna-Ps to pierce through Russian armor. Perhaps the latest addition to these weapons is the peculiar Ukrainian Stug-buggy that we wrote about a few days ago. The defenders are also extremely benefitting from a steady supply of these munitions, with the West (largely the US) committing to providing anti-tank munitions and heavy artillery.

He also denounced the global trade of weapons, saying that the “arms trade is a scandal” that very few nations or figureheads are brave enough to oppose openly.

“The production and the sale of armaments is a disgrace, but few are bold enough to stand up against it,” he said.

The Pope referred to the Spanish Civil War during the late 1930s, which became a testing ground for prototype Soviet and Nazi weapons. The conflict happened during the buildup of the Second World War. It saw the deployment of more destructive weapons like the Messerschmitt 109 fighter and new artillery systems that were used in the global war that followed.

However, Pope Francis said that he was unsure when asked if dealing with arms was justified if it were to supply Ukraine with weapons.

“I can’t answer. I’m too far away to the question of whether it is right to supply the Ukrainians,” Francis said. “There are international interests in every bit. One cannot think that a free state can wage war on another free state. In Ukraine, it was the others who created the conflict.”

Ukrainians have previously criticized the Pope for describing the conflict as “fratricidal” – a conflict within a single family or entity – essentially implying that the conflict between Russia and Ukraine is internal. They claim such depictions downplay the severity of Moscow’s actions.

Francis, who first visited the Russian embassy in the early days of the war, said that the Vatican had sent a request to Moscow for a meeting with Putin.

The message was “that I (Pope Francis) was willing to go to Moscow. Certainly, it was necessary for the Kremlin leader to allow an opening. We have not yet received a response, and we are still insisting.”

“I fear that Putin cannot, and does not, want to have this meeting at this time. But how can you not stop so much brutality? Twenty-five years ago in Rwanda, we lived through the same thing,” the interview quoted him saying, as he referenced a 1994 genocide in Africa.

When asked if he plans to make a trip to Kyiv, the Ukrainian capital, the Pope said that the trip is not on his agenda for now.

Pope Francis had some criticisms for the Russian Orthodox Church and its Patriarch Kirill, who was essentially backing Putin’s invasion.

“We (the pope and Kirill) are pastors of the same people of God. That is why we have to seek paths of peace, to cease the fire of weapons,” Pope Francis said.

Francis said that Kirill spent half the time parroting “justifications for the war” during a 40-minute video conference between the two patriarchs held in March. He reminded his Orthodox counterpart of their duties as religious leaders and urged that the Patriarch should not “become Putin’s altar boy.”