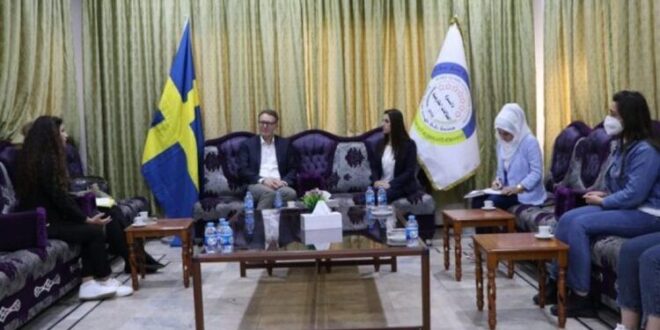 The Autonomous Administration of North and East Syria (AANES) handed over to a Swedish Foreign Ministry delegation five members of ISIS families in camps in northeast Syria, an official in the AANES said on Wednesday.

Abdukarim Omar, the co-chair of the Department of Foreign Relations in the AANES, posted in a tweet they handed over two Swedish citizens to the Swedish Foreign Ministry delegation on Sunday.

In mid-March, a Swedish delegation visited northeast Syria, and two women and their two children of ISIS families were handed over, according to an official handover document between the AANES and the Kingdom of Sweden.

The Norwegian Council will withdraw completely from the al-Hol Camp, east of Hassakeh, in the coming weeks, after closing its educational and legal centers, a special source told North Press on Wednesday.

The Norwegian Refugee Council has suspended all its work and activities in the Camp, except for essential services such as water.

Two days ago, unidentified attackers stormed the legal department of the NRC in the fifth sector, took cellphones and laptops from all the people who were in the department, and kidnapped an employee as well, an exclusive source told North Press.

“We are currently asking all the employees in the al-Hol Camp not to come to work until further notice,” the council said.

”We will only continue to deliver water to the trucks during the suspension period, as the Norwegian Refugee Council gives time to reassess the situation in the camp and review the security and safety measures,” it added.