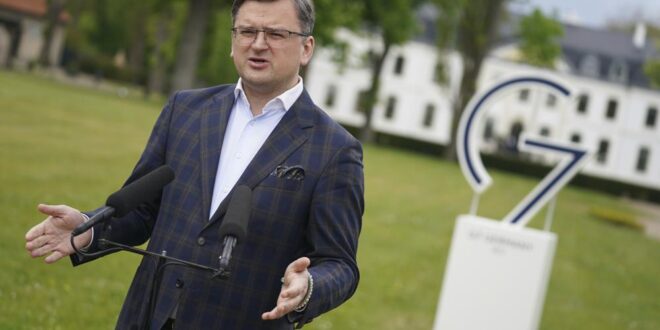 Ukraine’s foreign minister said Friday that his country is willing to engage in diplomatic talks with Russia to unblock grain supplies and to achieve a political solution to the war in Ukraine but won’t accept ultimatums from Moscow.

Foreign Minister Dmytro Kuleba said the Ukrainian government had received “no positive feedback” from Russia, which he alleged “prefers wars to talks.”

“We are ready to talk, but we are ready for a meaningful conversation based on mutual respect, not on the Russian ultimatums thrown on the table,” Kuleba told reporters on the sidelines of a meeting of foreign ministers from the Group of Seven major economies.

Kuleba said his talks with G-7 counterparts in Germany had been “helpful, fruitful, very honest and result-oriented.” He praised them for the financial and military support they have so far provided to Ukraine.

But he urged Ukraine’s supporters to supply more weapons, including multiple launch rocket systems and military planes, and to put further pressure on Russia’s economy by stepping up sanctions and seizing Russian sovereign assets to pay for rebuilding Ukraine.

The European Union’s foreign affairs chief announced plans to give Ukraine another 500 million euros ($520 million) to buy heavy weapons to fend off the Russian invasion.

“We will provide a new tranche of 500 more millions to support the military of Ukraine,” Josep Borrell, the EU’s high representative for foreign policy, said at the G-7 meeting in Weissenhaus, on Germany’s Baltic Sea coast.

The funds would be earmarked for the purchase of heavy weapons and take the EU’s total financial support for Ukraine to 2 billion euros ($2.1 billion), he added. EU diplomats cautioned that any disbursement requires backing from all of the bloc’s 27 members.

Some countries are expressing misgivings, and approval is unlikely before next week.

EU Council president Charles Michel, who represents the governments of EU members in Brussels, threw his “full support” behind the plan. “Time is of the essence,” Michel wrote in a message posted on Twitter.

Borrell also expressed hope of soon getting the bloc’s member states to agree an oil embargo against Russia, despite resistance from Hungary, which is heavily dependent on Russian imports.

Kuleba said he plans to join a meeting of European Union diplomats in Brussels on Monday, where the issue will be discussed.

“It’s a critical moment when we will see where EU unity will continue to exist or it will be broken,” he said, claiming Hungary’s concerns were “more politics than economic arguments.”

″(Russian President Vladimir) Putin has been trying for many years to achieve exactly his goal, to break the unity of the European Union on its policy towards Ukraine,” he added.

“If (,,,) Hungary opts out and does not support the package, I believe it will cause a lot of damage of the European Union itself and therefore they have to do their utmost to prevent it from happening,” said Kuleba.

Borrell, the EU foreign policy chief, expressed optimism that a deal could be reached.

“We need this agreement, and we will have it,” he said.

The three-day G-7 meeting, which ends Saturday, offered an opportunity for top diplomats from Britain, Canada, France, Germany, Italy, Japan and the United States to discuss the broader geopolitical implications of the Ukraine war, as well as other world problems. Representatives from Moldova and Indonesia were invited to participate in some of the talks.

G-7 officials considered questions such as how to pay for the eventual reconstruction of Ukraine and future relations with China during informal sessions at the secluded sea-side resort, which was sealed off from potential protesters by the presence of about 3,500 police officers.

The group issued a series of broad statements late Friday, pledging to support the rollout of COVID-19 vaccines in poor countries and emphasizing the need to better prepare for humanitarian emergencies.

They noted the risk of climate change increasing political, social and economic instability, making it harder for vulnerable countries to tackle the causes and impacts of global warming.

The meeting’s host, German Foreign Minister Annalena Baerbock, highlighted the links between the war in Ukraine and other crises by warning that failure to unblock millions of tons of grain stuck in the country could cause severe food shortages elsewhere.

“We can only see the tip of the iceberg at the moment,” she said. “We all know that (…) if climate crisis hits in summer around the world, the situation will get even worse.”