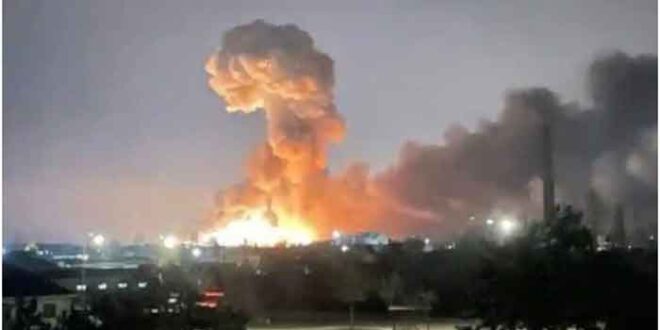 Pentagon Press Secretary John Kirby said in a brief statement following the call that Austin “urged an immediate ceasefire in Ukraine and emphasized the importance of maintaining lines of communication.”

Kirby said the last time Austin and Shoigu spoke to each other was on Feb. 18.

In a brief statement issued on Friday, the Russian Defense Ministry said Shoigu and Austin discussed topical issues of international security, including the situation in Ukraine.

Russian President Vladimir Putin and German Chancellor Olaf Scholz held a phone conversation on Friday to discuss the situation in Ukraine with an emphasis on the humanitarian aspect.
Putin outlined in detail the logic and main objectives of Russia’s special military operation and spoke about measures being taken by the Russian side to ensure the safety of civilians, the Kremlin said in a statement.
Putin noted that civilians were evacuated from Mariupol’s Azovstal steel plant with the participation of representatives of the United Nations and the International Committee of the Red Cross.
Putin also told Scholz his assessment of the Russian-Ukrainian peace negotiations, which are “essentially blocked by Kiev.”
The two leaders agreed that the discussion on the aforementioned issues would continue through various channels.

Milley To Talk To Gerasimov

U.S. Chairman of the Joint Chiefs of Staff Mark Milley is expected to reach out to his Russian counterpart, Valery Gerasimov, to request a phone call, according to a CNN report citing a U.S. defense official. The two last spoke on Feb. 11.

The U.S. will send more than 10,000 soldiers to Europe, who are expected to replace forces deployed to the region, many positioned along the “eastern flank” of the NATO military bloc.

Pentagon spokesman John Kirby confirmed the deployment during a Friday press conference, noting that the “security environment has now changed” in the region due to the conflict in Ukraine.

“The deployments are one-for-one unit replacements, which will leave our overall force posture in the region – approximately 100,000 – unchanged,” Kirby told reporters. “The units being replaced will return to their home station following an appropriate turnover of responsibilities.”

He said that the military could soon “take a look at the permanent footprint in Europe and make an assessment” about whether it should remain at its current levels, although no decision has yet been made.

Before Moscow sent troops into Ukraine in late February, U.S. forces in Europe numbered around 80,000, some stationed there permanently on bases, while others rotated on training deployments with NATO partners.

As some members of the alliance, such as Baltic state Lithuania, have pressed for a larger and more sustained American troop presence in recent months, U.S. officials have proposed ways to meet those requests, including by constructing new bases.

“My advice would be to create permanent bases, but don’t permanently station [US troops],” General Mark Milley, chairman of the Joint Chiefs of Staff, told lawmakers last month. He argued that would, in effect, mean long-term deployments, as “rotational forces” could cycle through “permanent bases.”

“And I believe that a lot of our European allies are very, very willing to establish permanent bases,” Milley added. “They will build them, they will pay for them.”

Russia has repeatedly noted that while it is up to Finland to decide which measures it will take to ensure its national security, it must also be aware of the consequences of its actions, the ministry said.

“Finland’s accession to NATO will seriously damage Russian-Finnish relations as well as stability and security in Northern Europe,” it added.

Russian forces carried out a rocket attack on a major oil refinery in Kremenchuk town in Ukraine’s central Poltava region on Thursday, said the head of Poltava regional military-civilian administration Dmytro Lunin.
“Today’s shelling of the Poltava region is perhaps the largest during the full-scale war,” Lunin wrote on Telegram.
Twelve rockets hit the infrastructure facilities in Kremenchuk, with most of them striking the oil refinery, Lunin said.
The attack caused fire at the oil refinery, Lunin said, adding there were no casualties in the shelling.
According to local media, the Kremenchuk refinery with a design capacity of 18.6 million tons is the largest oil refinery in Ukraine.

Visiting German Foreign Minister Annalena Baerbock on Tuesday said the government of Germany is working to provide modern weapons to Ukraine, the Ukrainian government-run Ukrinform news agency reported.
“We are working with German enterprises to ensure that Ukraine receives the most modern weapons,” Baerbock told reporters during a press conference with Ukrainian Foreign Minister Dmytro Kuleba.
In the coming days, Germany will begin training Ukrainian soldiers on using mobile howitzers, Baerbock added.
Besides, she said Germany will assist Ukraine in demining efforts and support Ukraine’s aspirations to join the EU.

China has voted against a UN Human Rights Council investigation into possible Russian war crimes in Ukraine amid concern that the probe is politically motivated. The move means Beijing has shifted from its previous stance of abstaining on the conflict.

“We have noted that in recent years the politicization and confrontation at the [council] has been on the rise, which has severely impacted the credibility, impartiality and the solidarity [of the body],” said Chen Xu, the top Chinese diplomat at the UN office in Geneva.

Chen made his comments before the Human Rights Council voted on Thursday – by a 33-2 margin with 12 abstentions – to approve a resolution calling for the war-crimes probe. Eritrea was the only other nation to vote no. Members that abstained included Armenia, Bolivia, Cameroon, Cuba, India, Kazakhstan, Namibia, Pakistan, Senegal, Sudan, Uzbekistan and Venezuela.

The investigation will apparently only include allegations against Russia, not crimes allegedly perpetrated by Ukrainian troops, and will focus on events in the Kiev, Chernigov, Kharkov and Sumy regions of Ukraine in late February and early March. It will be done “with a view to holding those responsible to account,” according to the resolution.

Moscow’s ambassador to the UN in Geneva, Gennady Gatilov, has argued that the “collective West” is organizing a “political rout to demonize Russia” rather than addressing the true causes of the Ukraine crisis and looking for ways to resolve those issues.

The UN General Assembly voted last month to suspend Russia from the Human Rights Council. China also voted against in that case, but it had abstained on other Ukraine-related resolutions, including a General Assembly condemnation of Russia’s military offensive and a UN Security Council rebuke of Moscow.

Speaking at a Security Council meeting on Thursday in New York, Chinese deputy UN ambassador Dai Bing argued that anti-Russia sanctions will backfire. “Sanctions will not bring peace but will only accelerate the spillover of the crisis, triggering sweeping food, energy and financial crises across the globe,” he said.

Ukrainian President Volodymyr Zelensky said on Monday he had discussed defense support for his country amid the conflict with Russia with Swedish Prime Minister Magdalena Andersson.
According to Zelensky, other topics of the conversation were energy cooperation between Ukraine and Sweden and the strengthening of sanctions on Russia.
Andersson tweeted that she expressed steadfast support for Ukraine during the phone call with Zelensky.

Ukrainian PM Shmyhal and visiting European Council President Charles Michel on Monday discussed steps to solve the issues concerning Ukraine’s agricultural exports, the government press service reported.
During the talks in Ukraine’s southern port city of Odessa, Shmyhal said that the shipping of goods through the Ukrainian ports via the Black Sea was suspended since February 24 due to the Russia-Ukraine conflict.
Currently, about 70 vessels are blocked in the seaports of Ukraine, including 10 in the port of Odessa, Shmyhal said.
“The vast majority of ships are bulk carriers and mixed cargo vessels. Some 90 million tons of agricultural products that Ukraine planned to supply to countries in Africa, Asia and Europe have been blocked,” he said.

A total of 20 European companies have opened accounts in Gazprombank JSC, preparing to pay in rubles for Russian gas. Another 14 buyers have asked for the paperwork needed to set them up, Bloomberg reported on Thursday.

These mirrors a dilemma the EU is stuck in after echoing the U.S. hegemony call – forcing Brussels to adopt a double-faced approach under which the government cast itself tough yet enterprises take a calibrated way to still do business with Russia.

As EU escalates sanctions against Russia with a sweeping oil ban plan, internal divisions in European countries as well as the Western group are further exposed, and now even Ukraine is doing a calculus, with a fresh move to take natural gas transferred via its territory as a bargain chip to ratchet up pressure on the West.
The move comes after European buyers have been struggling for weeks to figure out how they can pay for Russian gas in rubles as Moscow demanded and not fall afoul of EU sanctions.
Trying to bypass the restrictions, European buyers have to set up two accounts with Gazprombank to facilitate the transaction: one in a foreign currency and another in rubles.
The EU enterprises’ move is in sharp contrast to EU officials who have said companies should keep paying in euros, and that opening a ruble bank account would violate sanctions imposed by the bloc.
The internal divisions among the EU also widened with a ban on Russian oil in its sixth round of sanctions against Moscow.

With Russia’s counter-sanctions tools, the previous five rounds of EU sanctions against Russia have neither produced immediate harm on the latter’s economy nor achieved the designed effect. So the sixth round focuses on oil imports – one of the biggest trading categories between Russia and the EU, hoping this could inflict massive harm on Russia.

The EU sanctions plan has still drawn a backlash from a slew of EU countries.

Hungary said it would still block sanctions on Russian oil. The country gets 85 percent of its natural gas and more than 60 percent of its oil from Russia.

Ukraine is holding negotiations with Russia over the evacuation of seriously injured soldiers from the Azovstal steel plant in Mariupol, Ukrainian Deputy Prime Minister Iryna Vereshchuk said on Thursday.

Currently, there are no talks on the exchange of 500 or 600 people, which has been reported by some media outlets, Vereshchuk said.

She emphasized that the ongoing negotiations between Ukraine and Russia on the Azovstal evacuation are very difficult.

On May 7, Vereshchuk said that Ukraine has evacuated all women, children and the elderly from the Azovstal plant.

More than 6.4 million people have been reached with vital humanitarian assistance in Ukraine since the country’s military conflict with Russia started, said UN humanitarians on Friday.

This includes more than 5.7 million people who have been able to put food on their table. Cash assistance has been provided to over 655,000 people, allowing them to cover some of their most basic needs, said the UN Office for the Coordination of Humanitarian Affairs (OCHA).
More than 1.5 million people have received health care support, and around 352,000 people have been provided with clean water and hygiene products. Nearly 430,000 people have received protection services, psychosocial support and critical legal services, including support to internally displaced persons, it said.

Post Views: 31
Previous Lend Lease For Ukraine: It was not a Good Deal for US Taxpayers in WWII.
Next Ending ‘West’s Neocolonial Oppression’: On the New Language and Superstructures