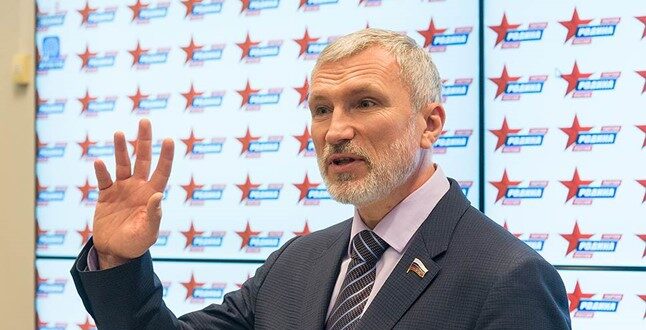 Russian Official Zhuravlev On Finland And Sweden Joining NATO: ‘These Countries Are Joining The Bloc That Strives To Destroy Russia. Consequently, We Want To Destroy Them In Return.’

When Finnish President Sauli Niinistö called Russian President Vladimir Putin to inform him that Finland was applying to join NATO, Putin’s response was low-key. Putin “stressed that rejecting the traditional policy of military neutrality would be wrong since there are no threats to Finland’s security. Such a change in the country’s foreign policy course could have a negative effect on Russia-Finland relations, which have been built over the course of many years in the spirit of neighborliness and partnership cooperation and have a mutually beneficial nature.”[1]

In contrast to Putin, Alexei Zhuravlev, First Deputy Chairman of the Duma Defense Committee, in an interview with URA.RU media stated that Finland risked destruction by Russia by joining NATO. Zhuravlev argued that once Finland joined NATO, it would be unable to continue good relations with Moscow as before. As a NATO member, Finland would be part of an alliance that sought to destroy Russia, and Russia would seek to destroy Finland – something that would prove quite easy. Like Ukraine, Finland would succumb to US pressure to provoke Russia, and would suffer the same consequences.

The interview with Zhuravlev follows below:[2]

Finland and Sweden have officially announced their accession to NATO. These steps, in the words of Presidential Spokesman, Dmitry Peskov, pose a threat to Russia. Should Russia take some preventive steps to defend itself against this threat, or even conduct a preemptive strike?

After World War II, Finland tried to exist on good terms with us. And it succeeded. Today they are going to do things that will create problems for us. Alright, then. But when one you create problems for someone, you got to understand that you yourself will get them. As it is now happening in Europe, which tried to create problems for us with sanctions, but who is now suffering from these sanctions? France, for example, is already planning to introduce ration cards.

Do you agree with Dmitry Polyansky, Russia’s Deputy Ambassador to the UN, that the deployment of a NATO contingent on the territory of Finland and Sweden will result in these countries becoming a possible target for the Russian military?

That they will become targets for the Russian military is beyond discussion. Another question is, what other consequences will there be? It is impossible to give a direct answer today. But I am aware of what the threat will be for Finland.

Generally, its [very] existence. What other consequences will there be? NATO is trying to create problems for us, creates a threat to Russia’s existence; the US says this plainly; our president has spoken openly of these US and NATO goals. If Finland strives to join this bloc, then, accordingly, our goal is totally legitimate, i.e. to put the very existence of this state in doubt. This is logical.

If the US threatens our state, then fine by me. Have a Sarmat [nuclear missile] and there will be nuclear ashes left of you if you think that Russia shouldn’t exist. Finland claims that it is on the side of the US. Well, get in line. Finns in general should be grateful to Russia for their statehood, for the fact that Finland exists as a country.

Should Russia deploy nuclear arms in the vicinity of the Finnish border?

Why bother? We don’t need to. We can reach them from Siberia with the Sarmat missiles, and even reach Great Britain. And if we deploy them in Kaliningrad… The flight time for a hypersonic missile is 200 seconds. Let’s go, guys. There won’t be strategic weapons deployed at the Finnish border, but Kinzhal” class missiles capable of reaching Finland in 20 seconds, maybe in 10.

So, in any case in the Leningrad Oblast, in Karelia the Russian military contingent will be strengthened, will it?

Definitely. The personnel will be strengthened too. This is natural. If up to now, there were no forecasts of possible hostilities from Finland, then now such prospects have become tangible. And this must be taken into account, beyond any doubt.

You claim that hostilities are possible. Will it be Finland’s own doing or rather provocation of the Finns by the same US and Great Britain?

You asked the right question. Finns have no quarrel with us. They get more than 90% of their gas supplies from us, as well as timber and many other things. Who needs fighting in the first place? Finns? They aren’t afraid of Russia attacking them. Of course, sooner or later the Americans will force them into it, just as they did with Ukraine. They are trying to force Poland, Romania too. And, as practice demonstrates, it works out for them.

It is impossible to argue that Finland will join NATO and will conduct itself towards us as previously. This won’t happen. The Americans will incite them to provocation. We have been patient for a long time. But it can’t go on forever.

In that case, in your opinion, what are the chances for the beginning of World War III, given these mounting tensions near Russia’s borders? Also, shouldn’t one keep in mind that China-Taiwan relations are at an awkward stage?

You see, the US will do whatever it takes to make World War III happen. Just not on their territory. They will try to avoid [exchanging] nuclear strikes, but they will try to drag all of Europe into a conflict with Russia; as well as to incite [conflict] situation in Asia. To set fire to as many countries as possible will be a very good way out of the [US’] internal economic crisis. They can write off all their problems on the war, as they already did in World War I and World War II. They were able to emerge from their crisis only thanks to the war in Europe.

Who will fire the first?

It’s unknown. It’s like in a fight: who was the first to draw a knife? You never know …

Could Russia be the first to launch a nuclear strike?

If there will be a threat to Russia’s existence.

NATO declared Russia to be its enemy. Therefore, it turns out that Finland and Sweden, by joining the bloc will turn from neutral and quite good-neighborly countries to adversaries of Russia? How will relations between our countries change?

One shouldn’t harbor any illusions. Therefore, from a military-wise, nothing will change drastically. However, Finland and Sweden should be put on the list of unfriendly countries. After all new NATO member-states will appear at our borders. Naturally, they must be recognized as unfriendly. And this shouldn’t be just a “matter of our concern,” as the [Russian] Foreign Ministry diplomatically puts it in such cases.

This is not a “matter of our concern.” It’s much more serious than that. These countries are joining the bloc that strives to destroy Russia. Consequently, we want to destroy them in return.

The Baltic states are eagerly waiting for Finland and Sweden to join NATO. Lithuania is already ready to severe relations with Russia. Do you think that these five countries will unite and attack our country as a single front?

They will unite either way. But we’re certainly not afraid of these tots. They’re as nasty as stinking bedbugs. But they will be squashed when it’s necessary. Right now, it’s a small bedbug though a stinking one. They could put forward territorial claims against us, like Estonia wanted to do. Well, let them try it. They are following exactly the same path as Ukraine. Let’s see where it will lead them.

Don’t have any doubts. The city is the main target [in this direction]. There is no doubt about that. The question is different. Today we are engaged in a special operation [in Ukraine], saving every civilian life, while the Ukrainian Nazis are engaged in the opposite task, because it’s not their people, and for them the more casualties the better. If the Finns decide to destroy a certain part of our population, if they strike St. Petersburg, this threatens to destroy all of Finland, as a state. Well, how else could it be? How will this be perceived by a normal person if we were to say: “you have destroyed a little bit of ours, we will destroy a little bit of yours?” No, it will not be like that.