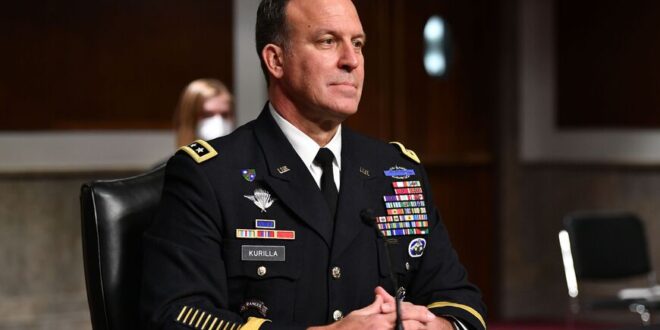 The newly confirmed commander of US military forces in the Middle East, US Army Gen. Michael “Erik” Kurilla, arrived in Israel on Tuesday on his first official tour of the region since taking on his new role.

Kurilla is expected to meet with Israel Defense Forces chief Lt. Gen. Aviv Kochavi and Defense Minister Benny Gantz during the two day visit, according to the IDF. He will also hold a panel discussion with the IDF’s strategic planning, operations and intelligence chiefs.

Discussions will focus on “ongoing operational cooperation between Israel and the United States, maintaining regional stability and dealing with joint operational threats and challenges in the region.”

Those talks, which have been ongoing for more than a year, remain hung up on the United States’ designation of Iran’s Islamic Revolutionary Guard Corps as a terrorist organization.

Regional tour: Kurilla’s first official visit to Israel as CENTCOM chief follows stops in Egypt, Saudi Arabia and the United Arab Emirates over the past week to “glean insights” from Washington’s partners and allies in the region. Kurilla also visited Bahrain and met with Jordan’s King Abdullah II earlier this month.

“I’m looking for gaps, risks, and opportunities in security for our partners,” the general told Al Arabiyya in an interview.

What’s Next: Defense Minister Gantz heads to Washington for meetings with top Pentagon officials on Thursday.