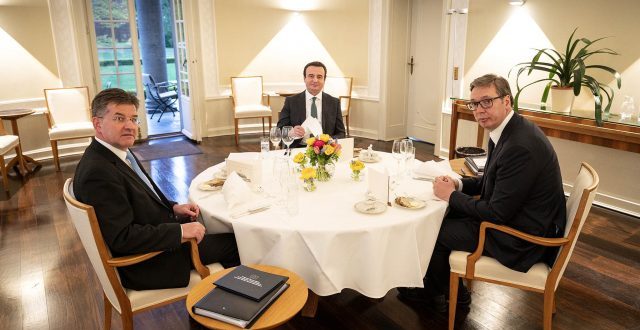 There is a window of opportunity for the EU to revive the stalled dialogue between Serbia and Kosovo – against the backdrop of war in Ukraine and with strong governments in Paris and Berlin.

The Kosovo-Serbia dialogue process is lagging again. The last time that Serbian President Aleksandar Vucic and Kosovo Prime Minister Albin Kurti met within the framework of normalization of relations facilitated by the European Union was in July 2021.

Their only two meetings were described as unconstructive, difficult, and unstatesmanlike.

To incentivize the process, German Chancellor Olaf Scholz invited both Vucic and Kurti to Berlin on the same day for bilateral meetings and for a joint informal dinner in lieu of a proper meeting as part of the dialogue.

The meetings also served for the Chancellor to reiterate EU membership prospects for the region against the backdrop of the war in Ukraine and Russia’s increasing influence and its potential destabilizing effects in the Balkans.

Germany deemed the timing of the meeting an opportunity to reiterate EU support for the region and bring new impetus to the dialogue process. This reads as determination to further strengthen Germany’s and the European Union’s sphere of influence in this part of Europe.

Resolution of the Kosovo-Serbia dispute remains important for stability in the Balkans, and is seen as a way to diminish and insulate the influence of Russia in the region.

A final agreement between Kosovo and Serbia will not only bring lasting stability to a conflict-ridden region but it will also take away Russia’s leverage. It will allow the Western Balkans countries to be firmly anchored into Euro-Atlantic institutions.

The political momentum created in Europe by the war in Ukraine presents a good opportunity not only for Berlin but for other key member states to reaffirm their political support and to seek new ways to deal with realities in the Balkans.

Vladimir Putin’s brutal war in Ukraine has brought to the surface the fault lines in Europe’s political and security approaches to its neighbourhood, and has also emphasized the continued need for US leadership.

The Western Balkans is always mentioned as important to Europe and of strategic value to the US. But their policies so far did not match the rhetoric.

The war has now set into motion many political dynamics in the EU and in its member states, and seems to have convinced the EU that a strengthened resolve vis-à-vis the Balkans is necessary to face current and similar future risks.

A process increasingly seen as futile

The EU-led process on normalizing relations between Kosovo and Serbia is increasingly seen as futile, while the intransigent stances of both parties and their lack of strategy has been an irritant to many.

Serbia under Vucic does not seem willing to prepare the country to let go of Kosovo, just as it is not ready to fully endorse EU values; to date, Serbia, as an EU candidate country, has failed to strengthen rule of law, accountability, or transparency.

It has failed to break ranks with Russia and has failed to stop jeopardizing the security of the region by not acting constructively towards Kosovo and other neighbours.

Although the results of recent elections in Serbia are not yet set, the Serbian political landscape has clearly shifted to the right.

The new governing coalition will likely be the same as last one, with the pro-Russian Socialist party co-governing with Vucic’s Progressive Party.

Meanwhile, Serbia’s parliament has seen the entry of two right-wing parties that have been organizing pro-Russian protests since the beginning of the war in Ukraine – and which refuse to acknowledge the existence of Kosovo other than as part of Serbia.

For Kosovo, the normalization process with Serbia has also been burdensome.

This is not only due to the current dynamics of the leaders but because there has been no continuity in the leadership in the process, no internal cross-party coordination and no politically cohesive strategy on how to deal with Serbia.

Kosovo has also failed to offer a convincing strategy on how to integrate its Serbian community, although the current government has clear stands on strengthening sovereignty and aligning fully with the Euro-Atlantic camp.

The current situation between Kosovo and Serbia can best be described as “continuation of war by other means”, a very fragile peace that needs constant attention and maintenance.

Following the meeting in Berlin, Kosovo announced that it would be moving swiftly towards Council of Europe membership and NATO’s Partnership for Peace.

This then drew a sharp response from Serbia, which reiterated that it would re-start its campaign to de-recognize Kosovo – even though both leaders vowed in Berlin that they would remain loyal and constructive to the dialogue process lead by the EU.

EU must accept it is a stakeholder in the process

The EU’s current enhanced political unity gives an impression that there is a sharper focus of the power and purpose of the European Union in the Balkans.

But it’s not clear yet whether it is adequate for the EU to just show political determination, especially after the German Chancellor announced the EU enlargement process is “more dynamic than other forms of partnership”, while France’s President Emmanuel Macron calls for a new European political community that would bring together all democratic countries in Europe, including the Western Balkans countries.

While the main EU members states are trying to find common grounds on how to approach disputes in the region, strengthen EU enlargement process and therefore insulate the region from potential instability, some steps could be taken in the meantime.

Germany and the EU could begin by firmly distancing themselves financially and politically from countries that do not endorse democratic politics and governance, rule of law and the same security concerns as those of Europe.

Berlin in particular could start withdrawing its support from autocrats and by more firmly condemning any assault on democracy.

There is no alternative to the dialogue on resolving the dispute, for Kosovo, Serbia or the EU.

But the EU must realize that it is not an impartial party to the process but a stakeholder, and, as such, it should accept being the third party, alongside Kosovo and Serbia.

Obviously, the EU is in a difficult spot here, as a mediator with stakes in the process, and as an adjudicator.

But Germany and European Union, as a party to the process, could use the new momentum to create political and diplomatic confidence; by bringing the five non-recognizers of Kosovo in the EU on board; by granting visa liberalization for Kosovo; and by supporting Kosovo’s bids to join to Council of Europe and NATO’s Partnership for Peace.

With Macron’s extended presidency in France, and with Scholz’s stable governing coalition in Germany, these moves would strengthen the damaged credibility of the EU in and over Kosovo.

The EU and its member states have tolerated the decline of democracy, assaults on independent institutions and threats to security by autocrats in the region for too long.

It is in these areas that the European Union can play a huge role in supporting the democratic citizenry in Serbia, by not compromising on the rule of law.

To continue believing that Vucic is a Western-aligned political actor who can steer Serbia firmly towards the EU is not only imprudent but politically naïve, and damages democratic forces and the citizenry in Serbia.

Granted, the EU and its member states cannot democratize the region on their own; democratic consolidation can only come from within.

But it is important that the little democracy there is gets support from outside, rather than this support going to autocrats for the sake of stability.

For Kosovo, the precondition to a successful resolution of the dispute with Serbia is accommodation of the Kosovo Serbs – but this is a two-way street.

Kosovo Serbs, especially those living in the north, must be allowed to be democratically minded; to date, they have been heavily under the tutelage of Belgrade, which dominates them through a local political party to which it has direct links.

For Kosovo, lack of progress in the dialogue also means lack of an EU perspective. Even if Kosovo were to have a sound strategy on how to integrate Kosovo Serbs, this strategy is bound to be undermined by Vucic who is always present in all capacities in northern Kosovo.

This year and the next are the best opportunity to push for a final resolution of the dispute between Kosovo and Serbia, not only due to politically ripe conditions in Europe but also because, with Scholz and Macron firmly in office, these two have the potential to influence developments in the Balkans.

There must be no delay. The year 2024 will be brimming with elections in the US and the EU – which will push the Kosovo-Serbia dispute and the whole region back to the margins of international politics.

Post Views: 82
Previous Democracy Digest: How to Lose Friends and Alienate People, by Viktor Orban
Next Pro-Assad Figures Ousted from Parliament in Lebanon