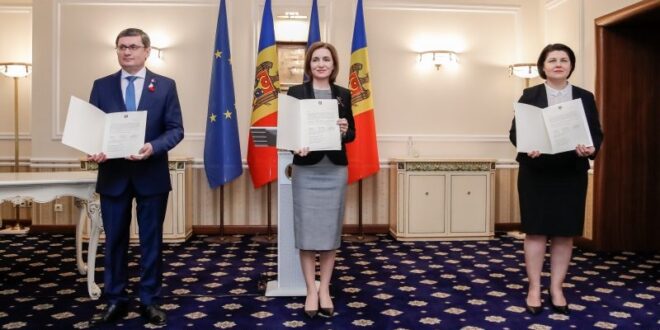 From Moldova to Montenegro, everyone seems to be in a hurry, though perhaps for different reasons. Meanwhile, in some corners of south-east Europe, the gloves are coming off, in more ways than one.

Moldova is working hard to strike while the proverbial EU enlargement iron is hot (or at least warm. The Russian invasion of Ukraine at the end of February this year unexpectedly opened up the previously taboo issue of EU enlargement for countries such as Ukraine and Moldova.

Having submitted its formal application for membership on March 3, Moldova worked flat out to complete the European Commission’s questionnaires – more than 2,000 questions – which are a stepping stone for the EU to assess the Moldovan application for candidate status. In the process, Chisinau mobilised the resources of civil society organizations in Moldova. Now, all eyes are focused on the end of June European Council summit which could decide on the viability of the membership bid.

Authorities in Turkey are cranking up their efforts to undermine the country’s opposition parties as the ruling AKP and President Recep Tayyip Erdogan face falling popularity ahead of presidential and parliamentary elections in 2023. In the latest ruling by the courts, the Court of Cassation upheld several jail sentences against Canan Kaftancioglu, the head of the opposition CHP’s Istanbul branch.

Kaftancioglu has been sentenced to prison for insulting Turkey and its president on social media, in the view of judges. While Kaftancioglu will only serve a few days of her prison sentence in all likelihood, the real problem is that the ruling would also ban her from active politics. Opposition politicians fear this is only the beginning of the AKP’s efforts to gut the opposition of able politicians.

On May 6, Serbian President Aleksandar Vucic held a long-heralded and delayed two-hour address to the Serbian nation. As many times before, there was plenty of fanfare and preparation for a ground-breaking speech, packed with major announcements.

As many times before, Vucic’s address to the nation was long in duration but short on substance. No major foreign or domestic policy realignments or changes were announced. However, Vucic did talk about reinvigorating Serbia’s EU accession process, relations with Russia, energy and much more. We fact-check some of the claims made by the Serbian President.

One of the first moves of Montenegro’s new Prime Minister Dritan Abazovic and his government has been the appointment of a new head of the country’s National Security Agency. Yet the choice of appointee has aroused controversy, with part of Abazovic’s own government voting against the appointment.

The new head of the Agency will be Savo Kentara, the former head of the Atlantic Council NGO in Montenegro. That the Agency has many problems and was mired in numerous scandals and controversies, particularly during the rule of the Democratic Party of Socialists, DPS, is not in doubt. Yet critics of Kentara’s appointment point out that his alleged ties to the DPS do not bode well for the prospects of reforms within the Agency.

Albanian organized crime gangs seem to be deploying an unusual system of issuing ‘warnings’ – non-lethal bomb blasts. According to Albanian police, over the last five years there have been more than two hundred non-fatal bomb blasts in the country.

In most cases, no perpetrators have been identified. Our analysis takes a closer look at the methods employed by Albanian crime gangs to send warning and settle scores, as well as why it is so difficult for authorities to get to the bottom of who is planting bombs.

Post Views: 101
Previous Iran Trying to Force the US to Meet All Its Demands
Next Democracy Digest: How to Lose Friends and Alienate People, by Viktor Orban