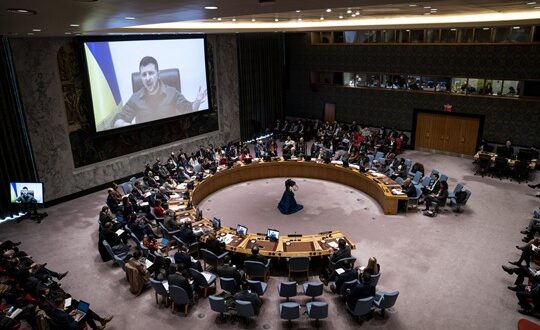 The U.N. Doesn’t Have to Be a Casualty of the War in Ukraine

Last week, Ukrainian President Volodymyr Zelenskyy delivered an impassioned rebuke to the United Nations Security Council for its failure to prevent Russia’s invasion of his country.

“Where is the security that the Security Council needs to guarantee?” he demanded. “It’s not there.” Rather than taking forceful action to arrest or even condemn Russia’s behavior, he said, the body had devolved into a venue for “conversation.” It was obvious to all that “the goals set in San Francisco in 1945 for the creation of a global security organization have not been achieved,” Zelenskyy concluded.

Post Views: 70
Previous Conflict Trends Update
Next To Remake Multilateralism, Start With the Role of Africa