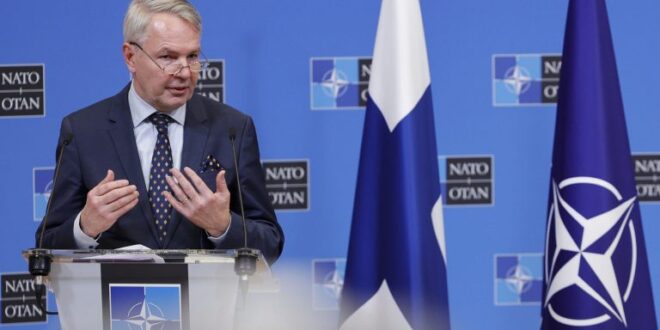 Late last week, Finland’s prime minister and president jointly announced Helsinki’s intention to move ahead with its application for NATO, a move that, if completed, would be a significant boon for the transatlantic alliance.

Putin believed a strong and swift invasion of Ukraine would intimidate NATO and non-pliant nations on Russia’s periphery, but instead, the poor performance of Russia’s military has strengthened Western resolve.

Finland and Sweden joining NATO is just another unintended consequence triggered by Putin’s blunder, which is already transforming the European security architecture in ways previously unimaginable.
But NATO enlargement is far from a fait accompli, as not all members apparently favor further enlargement of the alliance, most recently voiced by Turkish President Recep Tayyip Erdogan.

Late last week, Finland’s prime minister and president jointly announced Helsinki’s intention to move ahead with its application for the NATO alliance. “Finland must apply for NATO membership without delay,” announced Finnish President Sauli Niinisto, reflecting a broadly shared opinion within the country, where approximately three-quarters of the population supports joining the alliance. The polling numbers are even more remarkable considering that, just a mere 6 months ago, only about one-fifth of the country was behind such a move. Beyond merely energizing Western pushback, Russia’s invasion of Ukraine has led countries like Finland and Sweden to move forward with seeking to join NATO. Finland joining NATO would be a major boon to the alliance, as Helsinki brings considerable military skills, including valuable intelligence capabilities, modernized armed forces, and deep knowledge of how Russia operates, given history and geography. Sweden followed suit by submitting its own application for NATO, and Stockholm no doubt brings its own valuable military and technical capabilities to the alliance.

To be sure, this scenario is the exact opposite of what Russian President Vladimir Putin, hardly a master military strategist, had intended to bring about. In Putin’s mind, due to previous Russian successes in Georgia and Crimea, the February invasion of Ukraine would be met with relatively little resistance. Moreover, the Russian show of strength was intended to intimidate NATO and any non-pliant nation in Moscow’s sphere of influence. On the contrary, the Russian military’s pitiful performance on the battlefield has strengthened Western resolve, sullied the Kremlin’s image in many parts of the world, and led to severe economic and geopolitical constraints that will have significant negative impacts on Russia’s global standing. Putin’s erratic behavior and unhinged aggression have directly pushed European countries to reconsider their security policies and force structures. Finland and Sweden’s move to join NATO drew a relatively muted response from Putin, although he did warn that the buildup of military infrastructure in either of those countries would elicit a response from Moscow.

Finland—and potentially Sweden—joining NATO is just another unintended consequence triggered by Putin’s blunder, which is already transforming the European security architecture in ways previously unimaginable. Germany has altered its military posture and agreed to increase spending on defense, while even Eastern European countries typically favorable to the Kremlin, such as Bulgaria, have taken drastic steps to become less dependent on Russian energy supplies. Yet, there are still countries within NATO that are proving to be difficult to convince. Italy has said it intends to pay for Russian gas via a mechanism that supports the ruble, Russia’s currency, despite the fact that doing so is a breach of sanctions. Meanwhile in Hungary, Prime Minister Viktor Orban is playing spoiler regarding a European Union agreement on a phased-in embargo on Russian oil. Budapest has also blocked the transportation of weapons bound for Ukraine through Hungarian territory. Hungary has consistently attempted to play both sides in the conflict, extracting concessions from the EU while careful not to go out of its way to antagonize Russia, a position that has led to issues between Hungary and Poland.

Still, NATO enlargement is far from a fait accompli, as not all members apparently favor further enlargement of the alliance. Turkish President Recep Tayyip Erdogan stated Ankara’s opposition to Finland and Sweden joining NATO, commenting that “Scandinavian countries are like guest houses of terrorist organizations. They even take part in their parliaments. At this point, it is not possible for us to look at it positively.” Erdogan’s comments are related to previous complaints that members of Kurdish militant groups at war with Turkey are given safe haven in countries such as Finland and Sweden. This is not the first time that Erdogan will be going against the grain within NATO. Turkey’s decision to purchase the S-400 missile system from Russia led to Ankara being booted from the F-35 program and exacerbated existing tensions. But since the beginning of the war in Ukraine in February, Turkey has distanced itself from Moscow while mostly seeking to maintain a balanced role, treading carefully to maintain its legitimacy and position as a trusted interlocutor.

Russia-backed/aligned influence networks have pushed anti-NATO disinformation narratives and conspiracy theories since before the February 24, 2022 full-scale invasion of Ukraine, including justifying Russia’s illegal war on Ukraine as a consequence of “NATO expansion” and “NATO aggression.” Several anti-NATO narratives have been tailored to appeal to online audiences in Sweden and Finland. Most prominent are narratives that are portraying NATO as a “war alliance” pushing infographics of how NATO stands for the “North Atlantic Terrorist Organization” coupled with images from wars in the Balkans, North Africa, and the Middle East—clearly seeking to influence citizens with heritage from these countries or who fled wars. Other anti-NATO narratives cater to conspiracy-driven violent extremists, including white supremacy extremists, by utilizing the anti-Semitic “Global Cabal” conspiracy theory, claiming that NATO is responsible for the influx of immigrants in Europe and the Nordic countries. Preliminary analysis suggests that, at least to date, none of the Russia-backed/aligned anti-NATO disinformation narratives appear to resonate within a Swedish or Finish online audience to a concerning degree. Moreover, both Swedish and Finnish government agencies are well-versed in tracking, analyzing, and countering Russian disinformation campaigns, yet another benefit to the alliance if these countries join NATO.

Post Views: 61
Previous China says it wants to expand BRICS bloc of emerging economies
Next The Food Insecurity Crisis is Not Going Away