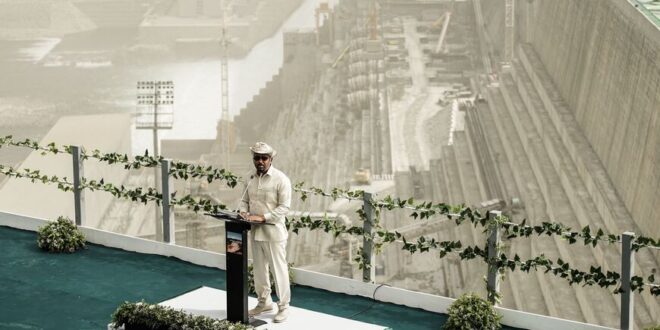 Ethiopia announced that it intends to find an amicable solution with Egypt and Sudan to the outstanding issues related to the Nile River dam, in the lead up to the third filling process of the dam’s reservoir, which is expected to cause an escalation between the three countries.

Ethiopia has recently announced its commitment to finding an amicable solution with Egypt and Sudan to the outstanding issues related to its giant hydroelectric dam, amid fears of an escalation by the end of this month in the lead up to the third filling of the dam’s reservoir in the absence of any agreement between the three countries.

On May 13, Ethiopian Deputy Prime Minister and Minister of Foreign Affairs Demiki Mekonnen expressed his country’s commitment to settling the dispute and finding an amicable solution to the outstanding issues over the Grand Ethiopian Renaissance Dam (GERD).

Mekonnen’s comments came during his meeting with EU Special Representative for the Horn of Africa Annette Weber in Addis Ababa, during which the two sides discussed the developments of the tripartite GERD negotiations led by the African Union (AU).

In separate remarks on May 17, Mekonnen told members of the Ethiopian parliament that his country is committed to addressing issues related to the dam through peaceful negotiations with Egypt and Sudan under the AU umbrella and in line with the Declaration of Principles signed in 2015.

Since June 2020, AU attempts to broker a deal to end the stalemate in the tripartite negotiations have failed. The latest round was held in Kinshasa, the capital of the Democratic Republic of the Congo, in April 2021, and it failed to lead to an agreement to resume negotiations, thus leading the parties to trade blame for the obstruction of the talks.

Egypt and Sudan as well as Ethiopia have been locked in a bitter, decade-old dispute over the GERD. The issue has reached a deadlock amid mounting fears of a military conflict in the already volatile Horn of Africa.

Egypt and Sudan have repeatedly failed to persuade Ethiopia to agree to a legal and binding agreement regulating the process of filling and operating the dam and its method of operation during the dry years in which there is less rainfall. The amount of water that Addis Ababa is to release toward the two downstream countries will consequently decrease during drought years.

Speaking in a press conference on May 15, Egyptian Prime Minister Mustafa Madbouly said that his country has clear historical rights to the Nile River, stressing, “We will not accept any harm to our water resources.”

Madbouly added that his country does not stand against the development of any of the Nile Basin countries, but at the same time Egypt clings to preserving its rights to the waters of the Nile River and deals in this context calmly and wisely with its African brothers.

For his part, Egyptian President Abdel Fattah al-Sisi stressed the need to reach a legal and binding agreement on the process of filling and operating the dam in a way that preserves Egypt’s water security and achieves the common interests of the three countries.

Sisi’s comments came during a meeting held May 11 in Cairo with US national security adviser Jake Sullivan.

Riccardo Fabiani, director of projects in North Africa at the International Crisis Group, told Al-Monitor that an agreement between the three parties is possible and, despite its hesitations, Ethiopia might be open to a deal.

However, Fabiani pointed out that the problem remains that there is no consensus between Egypt, Ethiopia and Sudan on what this agreement should entail — for example, whether it should be legally binding — or the possibility of third-party arbitration in the case of disagreement.

Egypt and Sudan are calling for an effective and binding mechanism to settle future disputes, while Ethiopia insists on an agreement that includes nonbinding guidelines.

In the upcoming rainy season in July, Ethiopia intends to embark on the third filling phase of the GERD despite the deadlocked negotiations with Egypt and Sudan, both of which fear that the dam will limit their supplies of the Nile’s vital waters.

Also, Ethiopia announced in February the partial operation of the dam through limited electricity generation, a move that the downstream countries also condemned and deemed as a violation of the Declaration of Principles signed by the three countries and prohibiting any of them from taking unilateral measures in the use of the river’s water.

Shortly before this move, Egypt had indicated its intention to resume negotiations to settle the issue. During a meeting with US Special Envoy for the Horn of Africa David Satterfield in Cairo on Jan. 25, Egyptian Foreign Minister Sameh Shoukry stressed the importance of resuming negotiations “as soon as possible” with the aim of reaching a fair, balanced and legally binding agreement on the rules of filling and operating the GERD while taking into account the interests of the three countries.

Nevertheless, Ethiopia’s unilateral move to generate electricity from the dam appears to have hampered any step toward resuming talks on the GERD.

“Looking at the current international conditions, it looks unlikely that negotiations will be resumed quickly. That said, external actors, like the UAE and the AU, as well as Senegal — which currently holds the presidency of the AU — [are] trying to convince the three countries to go back to the negotiating table, making a possible resumption in the next months,” Fabiani said.

Press reports indicated in mid-March that the UAE is leading a mediation to bring the three countries closer to settling the dispute. It was not the first time that Abu Dhabi sought to achieve a breakthrough at the level of the conflict, but its efforts have yet to reap their fruits.

In the summer of 2021, Cairo and Khartoum succeeded in pushing for the dam issue to be included for the second time on the agenda of the UN Security Council, despite Ethiopia’s opposition to this step. Subsequently, the council issued a presidential statement calling on the three countries to resume their talks under AU auspices. The AU has been seeking to resume talks ever since, to no avail.

Ethiopia says that the dam, whose construction is more than 80% complete at a cost of $5 billion and which is the largest in Africa, is vital for its economic development and for providing energy. However, Egypt deems it a serious threat to its Nile water flow, on which it almost entirely depends to meet its freshwater needs.

For its part, Sudan believes the dam regulates the waters of the Blue Nile and provides it with electricity. It is seeking, however, guarantees regarding its safe and appropriate operation in order to preserve its own dams, including the Roseires Dam, Sudan’s largest.

The crisis has significantly lost international momentum during the last period amid the West’s preoccupation with the Russian-Ukrainian war. However, the conflict is likely to make the headlines once again with the start of the third phase of the dam filling should Ethiopia proceed with it.

The diplomatic statements exchanged between Egypt and Ethiopia indicate that the conflict may erupt at any moment, with repercussions likely to be felt across the region.

Egypt and Sudan still hope to resume the frozen negotiations with Ethiopia before Addis Ababa begins filling the dam’s reservoir for the third time.

However, Fabiani sees that the third filling is unlikely to have a devastating impact on Nile waters available for Egypt.

He said that given recent rainfall volumes and the state of works at the GERD, it is very well possible that the third filling will not have a particularly significant effect on water downstream. “Egypt and Sudan could choose to have a relatively contained response to this event and avoid a further escalation,” Fabiani concluded.