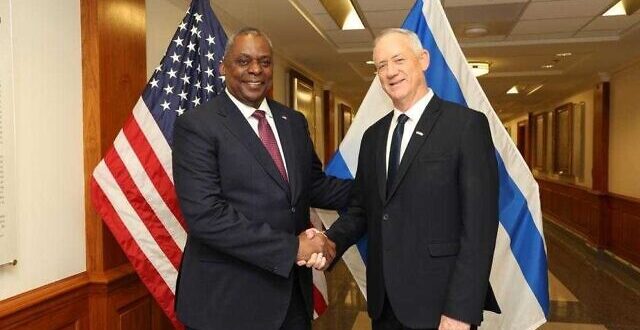 Following meetings with top American defense officials, Defense Minister Benny Gantz said Sunday that the US remains hopeful for a deal with Iran, but is standing firm against Iran’s demand to delist the Islamic Revolutionary Guard Corps as a terror organization.

The nuclear talks between Iran and world powers aimed at reviving the 2015 nuclear deal have stalled for nearly two months over Iran’s demand to remove the military branch from the US terror list.

Gantz met with US Defense Secretary Lloyd Austin and US National Security Adviser Jake Sullivan this week to discuss Iran and other issues.

“I think they would still be happy to see an agreement but they are quite decisive, especially on this issue of the Revolutionary Guards and al-Quds forces. I think they are right to be in this position,” Gantz told The Times of Israel. The Quds force is the overseas arm of the Guards and is designated as a terrorist organization by a number of countries, including the US and Israel.

The IRGC was designated a Foreign Terrorist Organization by then-US President Donald Trump’s administration, after it withdrew from the 2015 nuclear agreement officially known as the Joint Comprehensive Plan of Action.

The elite military unit has been discussed extensively in recent months after Tehran demanded the group be removed from a US terror blacklist as a condition for returning to compliance with the 2015 multilateral nuclear agreement.

Israel has urged the US to reject Tehran’s demand, saying the group is “a terrorist organization that has murdered thousands of people, including Americans.”

The US has indicated on several occasions that it does not intend to comply with Tehran’s demand, which has left talks in Vienna frozen since mid-March. There is concern that Iran could be close to being able to construct an atomic weapon if it chose to pursue one.

Gantz refused to comment on the assassination of a senior member of the Revolutionary Guard Corps in Tehran on Sunday, and on whether the incident would affect negotiations. There are scant details about the killing of Col. Hassan Sayyad Khodaei in his car in the middle of Tehran, and no claims of responsibility. The Guard blamed the killing on “global arrogance,” typically code for the United States and Israel.

Gantz was in New York to participate in the city’s Celebrate Israel parade, along with other ministers and top US government officials. He spoke to the media after an event honoring bereaved families who have lost members to terror and conflict in Israel, the first event of its kind in New York. He addressed a full house at Manhattan’s Park East Synagogue, along with Israel’s consul to New York, Asaf Zamir, Yaakov Hagoel, chairman of the World Zionist Organization, and US House Representative Carolyn Maloney.

The event was led by the Defense Ministry’s Department of Bereaved Families and aimed to build a supportive framework for the families in the US by fostering ties with local Jewish communities.

Gantz said he had discussed Iran, the war in Ukraine and some bilateral issues with US defense officials during his time in Washington this week. He told Austin there was an opportunity to make a “significant change in the region” by strengthening the regional coalition of countries acting under US leadership and cooperating with additional Middle East countries against Iran.

He said on Sunday that Iran was a global and regional issue, and was challenging the US in arenas including Venezuela, Algeria and the Middle East, and that its nuclear program was still moving forward.

“They have continued with the enrichment processes and with the research and development of advanced centrifuges and stockpiling them and are even close to installing them in more protected places,” he said. “This is something the world cannot afford.”

He said Russia’s invasion of Ukraine showed that the possibility of war was always on the table, especially to Europeans. The Iranian nuclear talks are being held in Vienna and involve Russia, the UK, France and Germany, as well as China and the UN. The US participates indirectly.

“We as Israelis, we have always known that, but Europe was woken up to this fact,” he said of the possibility of war. “See how careful people are when they are dealing with Russia, because Russia is a serious, strong nuclear country. Now who wants to live with Iranian aggression, when they have nuclear capability?”

The 2015 deal gave Iran sanctions relief in exchange for curbs meant to guarantee that Tehran could not develop a nuclear weapon, something it has always denied wanting to do.

The US unilaterally withdrew from the accord in 2018 under then-US president Donald Trump and reimposed biting economic sanctions, prompting Iran to begin rolling back its own commitments and advancing its nuclear development.

The Vienna talks, which started a year ago, aim to return the US to the nuclear deal, including through the lifting of sanctions on Iran, and to ensure Tehran’s full compliance with its commitments. The US communicates with Iran via intermediaries at the talks.

Last week, Gantz warned that Iran was just “a few weeks” from from accumulating sufficient fissile material for a bomb. It is also working to finish the production and installation of 1,000 advanced centrifuges enriching uranium, including at a new underground site at the Natanz nuclear facility, he said.

Last month the head of the UN nuclear watchdog agency confirmed that Iran had set up a new centrifuge parts workshop at its Natanz nuclear facility. The UN atomic energy watchdog chief said earlier this month he was “extremely concerned” about Iran’s lack of cooperation.

Post Views: 66
Previous How to Prepare for the Next Ukraine
Next Жизнь против СМЕРШа