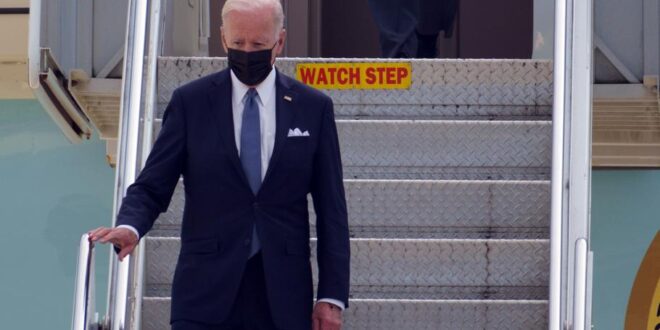 On Asia trip, Biden says he would be willing to use force if China invades Taiwan

President Joe Biden, speaking Monday during his first visit presidential visit to Japan, signaled an apparent end to the U.S. policy of strategic ambiguity by saying the United States would defend Taiwan against a Chinese invasion.

“Yes,” Biden replied when asked by a reporter in Tokyo if he was willing to get involved militarily to defend the island.

“That’s the commitment we made,” he said at a press conference with Japanese Prime Minister Fumio Kishida.

The U.S. has maintained a “One China policy” that acknowledges Beijing’s claim of sovereignty over Taiwan. However, the policy doesn’t give China the right to use force to take over the island, Biden said.

“We agree with the One China policy and all the attendant agreements we made, but the idea that it can be taken by force, just taken by force, would just not be appropriate,” Biden said. “It would dislocate the entire region and be another action similar to what happened in Ukraine.”

China could attempt to take control of Taiwan by the end of the decade, Adm. Phil Davidson, then-commander of the U.S. Indo-Pacific Command, told Congress last year.

“My expectation is that it will not happen,” Biden said in Tokyo, where he arrived Sunday on a five-day trip to South Korea and Japan.

But Biden’s comments seemingly end America’s policy of strategic ambiguity, a position intended to deter China and Taiwan from escalating their feud by leaving doubt as to when or if the U.S. might intervene in conflict.

Another former Indo-Pacific command chief, retired Navy Adm. Harry Harris, said in September that the policy should be reviewed, according to Japan’s Kyodo News.

In January, the vice chairwoman of the House Armed Services Committee, Rep. Elaine Luria, D-Va., said new legislation is needed to allow the U.S. to respond faster in case of an invasion.

“It will not be taken well by China for sure,” she told Stars and Stripes in an email Monday.

Beijing will likely claim that Biden’s comments impinge on its sovereignty, said Ian Chong, an associate professor of political science at the National University of Singapore.

The president’s words indicate that the U.S. position hinges on whether China uses force and doesn’t recognize Taiwan independence, Chong told Stars and Stripes in an email Monday.

“If anything, it is a strong statement to maintain the status quo,” he said. “The U.S. position is also a response to increasing Chinese pressure on Taiwan over the past decade.”

Biden and Kishida on Monday also committed to work closely to address China’s increasingly coercive behavior, which runs counter to international law, the White House said in a statement.

The pair also promised to address the challenge of North Korea’s nuclear and ballistic missile programs, the statement said.

Biden praised Kishida’s response to Russia’s invasion of Ukraine, and his determination to strengthen Japan’s defense capabilities. A strong U.S.-Japan alliance is the cornerstone of peace and stability in Indo-Pacific region, the White House statement said.

Biden concludes his Asia tour on Tuesday after a Quad summit in Tokyo with Kishida and the leaders of India and Australia.

Post Views: 94
Previous Putin Wants to Keep Fighting. Who Will Fill the Ranks?
Next Iran nuclear deal back in play after EU envoy’s visit