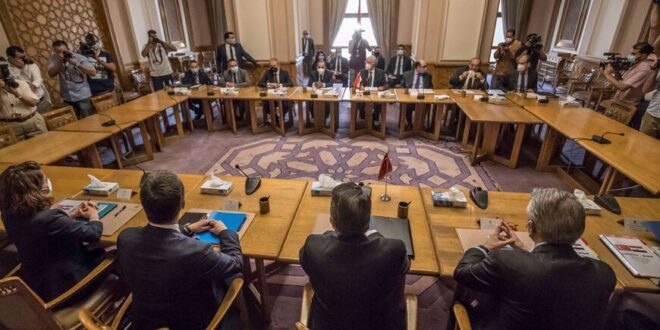 The Turkish finance minister is planning a visit to Egypt next month in the latest step toward rapprochement between the two countries.

In a new step toward rapprochement between Egypt and Turkey, Turkish Minister of Treasury and Finance Nureddin Nebati will visit Egypt on June 1.

The visit, the first by a Turkish minister to Cairo in nine years, marks a significant step in Turkish-Egyptian bilateral relations following the diplomatic rupture in 2013.

In a May 18 statement carried by the state Turkish Radio and Television Corporation, the ministry said that Nebati will head a delegation to Egypt to take part in the annual meetings of the Board of Governors of the Jeddah-based Islamic Development Bank. It read that Nebati will also hold bilateral talks with his Egyptian counterparts and representatives of the Islamic Development Bank. No more details were given on the topics to be discussed.

The Islamic Development Bank’s annual meeting, which will be held in Sharm el-Sheikh June 1-4, will tackle the bank’s future strategies and the latest developments related to the Turkish economy and economic policies in place.

The announcement of Nebati’s visit to Cairo comes a few weeks after Turkish President Recep Tayyip Erdogan visited Saudi Arabia on April 28, the first time in nearly five years, after which he spoke of Turkey’s openness to Egypt.

The announcement also follows two rounds of exploratory talks that kicked off last year between the Egyptian and Turkish deputy foreign ministers on the steps needed to normalize relations at the bilateral level and in the regional context.

In May 2021, a Turkish delegation led by Turkish Deputy Foreign Minister Sedat Onal headed to Cairo to take part in the exploratory talks in the first breakthrough toward reconciliation. Onal and his Egyptian counterpart Hamdi Sanad Loza held similar talks in Ankara again in September.

Since early 2021, Turkish-Egyptian relations have improved slightly. Speaking to reporters in Ankara on April 14, Turkey’s Foreign Minister Mevlut Cavusoglu announced “the start of a new phase in the two countries’ relations” and noted that reciprocal visits and discussions could take place.

However, despite the relative improvement in relations following the meetings held by their deputy foreign ministers, progress in Egyptian-Turkish relations has been slow, and the two countries have not yet agreed to exchange ambassadors.

Back in November 2021, Erdogan expressed his country’s willingness to improve ties with Israel and Egypt. Speaking to reporters, he also stated his readiness to exchange ambassadors with Egypt on a specific time table as part of a more comprehensive plan.

In the past few months, Turkey has accelerated steps toward the normalization of relations with Egypt. In April, the Turkish government shut down the Muslim Brotherhood-affiliated satellite channel, Mekameleen.

In an April 30 statement, the station said that it has permanently shut down operations in Turkey and closed its studios there after eight years. It said that it had decided to move its business outside Turkey, without specifying where it will broadcast from next.

According to several news reports, the Turkish authorities demanded the Brotherhood management of Mekameleen to either stop its programs that lambast the Egyptian regime or stop broadcasting from Turkish territory.

A number of Muslim Brotherhood activists have recently left Turkey after their residency permits were not extended by the Turkish government. In mid-March, the latter demanded that Brotherhood activist Yasser al-Omda leave its territory after he posted a video criticizing Egypt.

Speaking to Al-Monitor, Hassan Nafaa, professor of political science at Cairo University, praised Nebati’s upcoming visit to Cairo. “It is urgent for the two countries to strengthen economic and trade cooperation. The Egyptian market is promising for Turkish products.” He said that the visit, the first at the ministerial level, indicates that the two sides have made huge strides toward reconciliation.

According to Egyptian government sources who spoke to Sky News in February, trade between the two countries increased by a third — $1.6 billion — in 2021.

Nafaa pointed out that Nebati’s visit was preceded by other positive steps, including the closure of Brotherhood-affiliated stations broadcasting from Turkey. He explained, “Turkey will not sever relations with the Brotherhood, but may hand over those involved in crimes and fairly convicted to Egypt.”

Political researcher Mounir Adib told Al-Monitor, “The recent Turkish steps are a positive thing. They include the bilateral talks and visits, as well as the closure of a Brotherhood channel. [Turkey] has also prevented some Brotherhood members and supporters from [publicly speaking against the Egyptian regime], including Moataz Matar and Muhammad Nasser.”

Turkey and Egypt had cut off political relations in 2013 after the Turkish authorities opposed the ouster of President Mohammed Morsi, a leading figure in the Muslim Brotherhood and the “first democratically elected Egyptian president,” according to Ankara. The latter had also refused to recognize the legitimacy of current President Abdel Fattah al-Sisi, who took power in 2014.

Turkey had also labelled Morsi’s ousting as a “military coup,” while Egyptian authorities described the mass demonstrations that led to his removal as a revolution and accused Turkey of supporting the Muslim Brotherhood, which Cairo has officially classified as a terrorist organization.