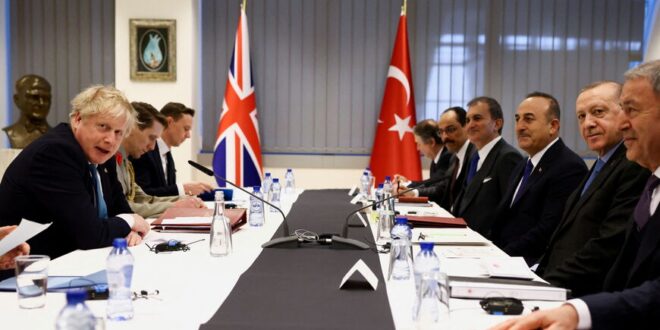 Erdogan said the operation would extend the Turkish armed forces’ areas of control in Syria to a depth of 30 kilometers along the two countries’ shared border.

“The main target of these operations will be areas which are centers of attacks to our country and safe zones,” the Turkish president said today.

The context: The threat comes as Erdogan’s government has hinted that it will block Sweden and Finland’s applications to join the NATO alliance, which were put forth last week in response to Russia’s war in Ukraine.

Ankara has issued several demands, including the extradition of alleged members of the Kurdistan Workers Party (PKK) from Sweden and the lifting of the two countries’ arms embargo against Turkey.

Why it matters: Turkey in 2019 launched a bloody military incursion against the Peoples’ Protection Units (YPG), a Syrian militia backed militarily by members of the US-led international coalition to defeat the Islamic State.

The Syrian YPG has roots in the PKK — a leftist militant group that has fought an insurgency against the Turkish state for nearly four decades — but denies posing any threat to Turkey.

Ankara’s 2019 operation, dubbed Peace Spring, was the third of its kind in northern Syria and led some 300,000 people to flee their homes after US forces on the ground were ordered by the Donald Trump White House to evacuate the area.

That operation slowed after US diplomats led by former Vice President Mike Pence pressed Ankara for a cease-fire and Trump threatened to “destroy and obliterate” Turkey’s economy, but violations of the cease-fire have continued.

What’s next: Erdogan said further operational decisions will be made Thursday at a meeting of top Turkish military officials.

“As soon as the Turkish armed forces complete its intelligence and security preparations, these operations will begin,” he said.

Whether Erdogan is bluffing this time remains to be seen.