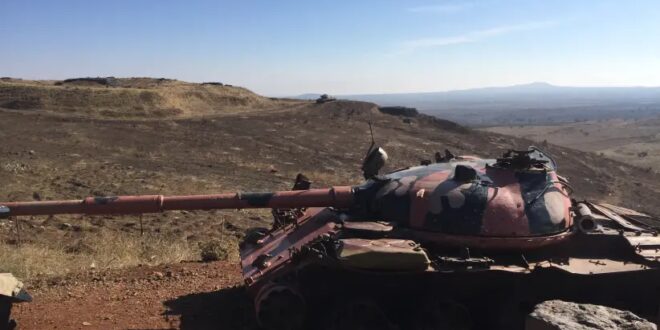 Netanyahu was ready to give up Golan for peace with Syria, new book claims

A 2011 deal would have required the Assad regime to end its ties to Hezbollah, Hamas and IRGC if it wanted the Golan back

Prime Minister Benjamin Netanyahu considered a deal with Syria that would have seen Israel give up control of the Golan and have a demilitarized zone established along the Jordan river.

The new claim is part of a book by Frederic C. Hof published by United States Institute of Peace called Reaching for the Heights: The Inside Story of a Secret Attempt to Reach a Syrian-Israeli Peace.

An excerpt and the account of the negotiations was first published at the Atlantic Council’s MENASource.

A deal with Syria allegedly would have seen the return of the Golan to Syria in exchange for Damascus ending its ties with Iran’s IRGC, Hezbollah and Hamas.

The excerpt asserts that Syria’s foreign Minister Walid Muallem had offered Israel a “breakthrough” back in 2011.

Hof claims that “[US Secretary of State Hilary] Clinton was quite prepared, therefore, to speak with Muallem to request the meeting. She assured him on two points: Her view that Netanyahu was seriously engaged and could, if necessary, be pulled by the United States across the finish line on territorial issues.”

The assertion that Israel would concede territory was central to a deal.

“Yet progress on territorial issues only increased the anxiety of Israeli Prime Minister Benjamin Netanyahu over the readiness of Syrian President Bashar al-Assad to deliver on Israel’s price for peace,” the author writes.

The book excerpt says that Clinton was going to call the Syrian foreign minister, but first sought to speak to Netanyahu’s key advisor Yitzhak Molcho.

“Molcho, in a conversation with Clinton and Deputy Secretary of State William (Bill) Burns, had reflected Israel’s acceptance in principle of full withdrawal as the price of peace with Syria,” wrote Hof. “Still, he indicated Israel’s profound uncertainty about Assad, expressing the fear that Israel would be lodging the equivalent of the deposit only to find Assad less than committed to an end game requiring him to do anything of substance.”

Nevertheless, Molcho indicated that Netanyahu was serious about “exploring peace with Syria, that he was ready and willing to do the deal, and that he saw the U.S. role as important,” according to Hof.

Burns is now Director of the CIA.

After speaking with Molcho, Clinton spoke with Muallem. The Syrian claimed Assad was “on board” for the peace process. Assad had already been trying to assure the US through talks with George Mitchell and also John Kerry in 2010. Clinton next spoke with regime leader Assad himself.

The trade off for Syria was that the regime would not only get back the Golan but also get the US to lift sanctions and it could get “economic assistance, and encouraging trade: everything was on the table if the terms of peace could be arrived at.”

The former ambassador noted in an interview with the Center for Strategic and International Studies in May 2022 that “on Netanyahu’s part, in particular, there was a strong disinclination for this to see the light of day—certainly in the preliminary stages. Therefore, it was a secret attempt at mediation. It was one that sadly came crashing down, beginning in the middle of March 2011 when the president of Syria, Bashar al-Assad, elected to use overwhelming deadly force against peaceful protestors.”

In his article at MENASource, republished at the USIP website, Hof describes the excerpt to his book that deals with the Golan negotiations. He describes these momentous days in 2011, apparently just before the Syrian rebellion began in the spring of that year.

“As 2011 dawned, considerable progress had been made in defining the salient features of the ‘line of June 4, 1967,’” the author notes. This was the “line that Syria insisted Israel should, pursuant to a peace treaty, withdraw. It was this line that would, in the event of peace, constitute the international boundary between Israel and Syria. Although a meter-by-meter boundary survey would still be required, by early 2011, the only important territorial issue still in dispute was the location of the line in relation to the upper part of the Jordan River flowing into the Sea of Galilee.”

This is not the first time he has hinted at this story. In 2019 in The American Interest, Hof noted “after meetings with the President of Syria and Prime Minister of Israel in late February and early March 2011 I was, for the first time, hopeful about the prospects for peace between those bitterest of enemies.”

He said that in the autumn of 2010, Dennis Ross “had opened direct contact for me to Prime Minister Benjamin Netanyahu, I had been shuttling between Jerusalem and Damascus with a draft treaty of peace I had written with Dennis’ assistance.” Netanyahu sensed real opportunity, the article noted. “Much work remained, but by the end of the first week of March 2011 much had been accomplished.”

To get to the peace deal and end “state of war” that still technically existed between Israel and Syria, Damascus would have to stop giving assistance to Hezbollah, Hamas and violent Palestinian groups. Syria would have to end its relationship with the Islamic Revolutionary Guard Corps and stop arms and personnel from the IRGC moving across Syria. “Syria would similarly need to deny the flow of weapons to Palestinian groups in Lebanon and support efforts to disarm them.”

Released in April, the book’s description on the USIP site claims that negotiations between Israel and Syria “came tantalizingly close to success.” It says that Ambassador Frederic Hof, who spearheaded the US-mediated discussions in 2009-11, worked “toward a deal to return Israeli-occupied areas of the Golan Heights in exchange for Syria severing military ties with Iran, Hezbollah, and Hamas.”

Post Views: 198
Previous The Long Arm of Authoritarianism
Next What stopped Hamas from attacking Israel on Jerusalem Day?