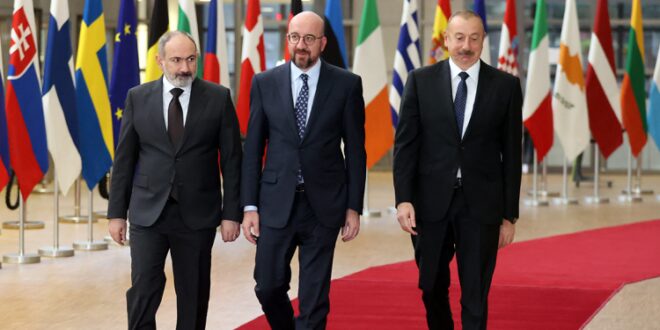 Since the collapse of the Soviet Union, the South Caucasus has been unable to find a model for regional cooperation or form regional organizations. As I have noted elsewhere, “Over the past three decades, various initiatives for regional cooperation have been proposed, including the ‘Peaceful Caucasus Initiative’ (Eduard Shevardnadze), ‘Stability Pact for the Caucasus’ (S﻿üleyman Demirel, on January 16, 2000), ‘Caucasus Stability and Cooperation Platform’ (Recep Tayyip Erdoğan, August 13, 2008), and ‘United Caucasus’ (Mikheil Saakashvili). But none of these proved successful or long-lasting because each failed to satisfy all of the key members of the wider region.”

But the relative calm that followed the Second Nagorno-Karabakh War, especially after the signing of the November 2020 cease-fire agreement, renewed hopes for regional cooperation in the Caucasus. Key regional actors proposed new formats, including Ankara’s “Six-Country Regional Cooperation Platform” (involving Turkey, Russia, the Republic of Azerbaijan, Iran, Georgia, and Armenia) and Tehran’s “3+3” model (involving the three South Caucasus countries of Armenia, Georgia, and the Republic of Azerbaijan plus Russia, Turkey, and Iran). The first summit within the framework of the 3+3 group was held in Moscow on Dec. 11, 2021. Although Georgia did not attend due to its differences with Russia over Abkhazia and South Ossetia, the Georgian flag was flown outside the Moscow summit alongside those of the five countries in attendance. This gesture signaled a shared desire among those present for a Georgian presence in future meetings.

Summit attendees made several efforts to resolve the border disputes between the Republic of Azerbaijan and Armenia, including by holding meetings between the two countries in Sochi on Nov. 26, 2021 and Brussels on March 31, 2022. Turkey and Armenia have also taken important steps toward normalizing relations, including the appointment of Serdar Kılıç, the former Turkish ambassador to the United States, and Ruben Rubinyan, the former head of Armenia’s parliamentary committee on foreign relations, as special envoys. The two held their first meeting in Moscow on Jan. 14, 2022 and this was followed by a meeting between Armenian Foreign Minister Ararat Mirzoyan and Turkish Foreign Minister ﻿Mevlüt Çavuşoğlu at the second Antalya Diplomacy Forum on March 11, 2022.

These challenges led to the failure of efforts to revive the Soviet-era railway in the South Caucasus, widespread opposition to the engagement of Nikol Pashinyan’s government in Armenia-Republic of Azerbaijan peace talks, and the still-unrealized normalization of Armenia-Turkey relations. Russia’s war with Ukraine has only complicated matters further, creating four major new challenges.

The first challenge is Georgia’s full and explicit support for Ukraine in the war, which has pushed Georgia into the Western camp and thus deepened the rifts between Tbilisi and Moscow. Indeed, in mid-May the president of the breakaway state of South Ossetia, Anatoly Bibilov, proposed holding a referendum on accession to Russia on July 17, 2022. He scrapped the idea several weeks later due to the “uncertainty of the legal consequences of the issue.” Were the referendum to happen, the dynamics of Russia’s annexation of Crimea would be repeated in South Ossetia, and it is not difficult to imagine that this same pattern could play out in Abkhazia too. These conditions have dimmed the prospects for Georgia’s participation in the 3+3 format.

The second challenge is that the Ukraine war has shifted Russia’s military focus away from the Caucasus, where it has traditionally acted as a “security guarantor” for unrecognized states, such as Abkhazia, South Ossetia, and Nagorno-Karabakh. Russia’s military campaign in Ukraine has not gone to plan. Moscow’s losses on the battlefield have prompted it to redeploy Russian forces stationed in South Ossetia and Abkhazia as well as bring in local troops from South Ossetia. Meanwhile, the Nagorno-Karabakh region has seen several military clashes since the start of the Ukraine war, including in the villages of Khramort and Nakhichanik in the Askeran region and Khnushinak and Karmir Shuka in the Martuni region on March 9, 2022. Some experts, especially Armenian ones, attribute this to the Ukraine war. Yerevan-based analyst Tigran Grigoryan is of this opinion, writing, “Azerbaijan is using the small window of opportunity created by the war in Ukraine to reach some tactical goals on the ground. Baku is also testing Russia’s red lines and limitations in Nagorno-Karabakh in this new geopolitical reality. Azerbaijan will surely keep on trying to further exploit Moscow’s weaknesses if the Russian war effort in Ukraine lasts for too long.”

As Alexa Fults and Paul Stronski have noted,

The Republic of Azerbaijan, however, rejects Armenia’s appeal and considers the ethnic Armenians of Nagorno-Karabakh to be Azerbaijani citizens.

In other word, Baku sees the issue of Nagorno-Karabakh as non-negotiable. The Republic of Azerbaijan even opposes the use of the term “Nagorno-Karabakh,” which it deems a vestige of Soviet-era political geography. Instead, Baku officially uses only “Karabakh” to designate this political unit of the Republic of Azerbaijan. All of this, especially the reduction of Russia’s military focus on the South Caucasus since the start of the Ukraine war, has raised concerns about the increased risk of conflict in South Ossetia and Nagorno-Karabakh. Such conditions are bound to negatively impact the prospects for regional cooperation in the Caucasus, especially the 3+3 model.

The third challenge is the damage done to Russia’s economy and soft power by the Ukraine war. It is clear that no regional project in the Caucasus will succeed without Moscow’s cooperation and participation. Historically, Russia’s buy-in (or lack thereof) has played an important role in the success (or failure) of regional cooperation projects. For example, its cooperation played an important role in forming the 3+3 model proposed by Iran and Turkey after the Second Nagorno-Karabakh War and the first meeting of the 3+3 representatives took place in Moscow. But the Ukraine war has drained Russia of its political and economic power, as well as its soft power, across the globe. Western sanctions threaten to recreate the conditions that resulted in the “Ruble Crisis of 1998,” when Russia experienced a sovereign debt default, a massive devaluation of the ruble, and a banking crisis. The debilitation of Russia at that time resulted in a great divergence within the Commonwealth of Independent States, leading the Republic of Azerbaijan, Uzbekistan, and Georgia to withdraw from the Collective Security Treaty (CSTO) in 1999. These three countries never returned to the CSTO, the crown jewel of Russia’s defense pacts. Thus, Russia’s political, economic, and military decline in the Caucasus will enable other powers to play a growing role in the region, especially Turkey. Russia, however, continues its efforts to demonstrate that the Ukraine war has no bearing on its position in the Caucasus. To this end, the foreign ministers of Armenia, the Republic of Azerbaijan, and Russia met in the Tajik capital of Dushanbe on May 13, 2022 to discuss the normalization of relations between Yerevan and Baku. Armenian Foreign Minister Mirzoyan also announced that Russian President Vladimir Putin will make a state visit to Armenia by the end of the year.

Despite Russia’s attempts at damage control, the Ukraine war seems likely to have a negative long-term impact on its political, economic, and military power. As a result, it will be difficult for Moscow to advance its plans and goals in the Caucasus, including within the framework of the 3+3 model. As the formation of the 3+3 reflected a new balance of power between Russia and Turkey after the Second Nagorno-Karabakh War, Russia’s decline and Turkey’s rise in the Caucasus could tempt Ankara to jettison the 3+3 model and strengthen bilateral cooperation with the Republic of Azerbaijan alone. In addition, the Ukraine war has intensified the rivalry pitting the Republic of Azerbaijan, Georgia, and Turkey against Russia. Efforts to strengthen the “Middle Corridor” or the Trans-Caspian International Transport Route — which starts from Southeast Asia and China and then runs through Kazakhstan, the Caspian Sea, the Republic of Azerbaijan, Georgia, and further to European countries — and cement Baku’s position as an alternative gas supplier for Europe fuel trilateral cooperation between the Republic of Azerbaijan, Georgia, and Turkey, leaving Russia and Iran out in the cold. These developments can only weaken the 3+3 model in the South Caucasus.

The fourth challenge is the spread of political protests in Armenia and the country’s uncertain political future. Protests against the Pashinyan government have been going on for the past two years, and the war in Ukraine has only intensified them inside Armenia, in the Armenian-controlled Nagorno-Karabakh region, and among the Armenian diaspora. Many political parties and groups opposed to the Pashinyan government believe that the Republic of Azerbaijan is seeking to take advantage of Russia’s partial eclipse in the Caucasus to assert full sovereignty over the Nagorno-Karabakh region. For such observers the signs of Baku’s intentions are all around them: in the Republic of Azerbaijan’s decision to cut off gas to the Nagorno-Karabakh region, explained away by Baku as a temporary technical problem; in military clashes in the villages of Khramort and Nakhichanik in the Askeran region and Khnushinak and Karmir Shuka in the Martuni region; and in the presentation of the five-article peace plan. Opposition parties and groups in Armenia accuse the Pashinyan government of dishonesty and a lack of transparency in the negotiation process with the Republic of Azerbaijan and Turkey. For this reason, opposition political parties such as the Republican Party, Armenian National Movement, Armenian Revolutionary Federation (Dashnaktsutyun), as well as a coalition of three former Armenian presidents (Leon Ter-Petrosyan, Robert Kocharyan, and Serge Sargsyan) are forming a united front against Pashinyan. Such unity is unprecedented in Armenia’s recent political history. In regard to protests in Armenia, Azerbaijani Foreign Minister Jeyhun Bayramov said he believes they lack “broad public support,” adding that, “the number of people who participate doesn’t exceed six or seven thousand people.” But in reality, the protests in Armenia are a force to be reckoned with. The Republic of Azerbaijan, Turkey, and Russia are all well aware that the fall of the Pashinyan government might bring to power someone, like former President Kocharyan, who strongly opposes the Nagorno-Karabakh cease-fire agreement, peace talks between Armenia and the Republic of Azerbaijan, and normalization of relations between Armenia and Turkey. The recent decision by the Azerbaijani government to construct a 55-km highway along with railway links between Zangilan and Nakhchivan through Iran could be interpreted as a sign of this concern. This route would serve as an alternative to the Zangezur Corridor across southern Armenia in the event that Armenia-Republic of Azerbaijan relations sour. For now it has yet to be built, although not for lack of effort by the Azerbaijani government.

Over the past three decades, internal divisions in the Caucasus region between Armenia and the Republic of Azerbaijan, as well as divisions between Armenia, Turkey, and Georgia on one side and Russia on the other, have hindered regional cooperation. The war in Ukraine, with its trans-regional fallout, seems to have nipped in the bud nascent trends in regional cooperation, especially those adopting the 3+3 model. Georgia’s prospects for membership in the 3+3 platform have greatly receded, and in practice this model has been reduced to “3+2.” The political situation in Armenia remains uncertain and unstable, and if nationalists were to win power this might seal the fate of even the 3+2 model. Meanwhile, Russia’s military focus on the Ukraine war, combined with the weakening of its economy and soft power as a result of extensive Western sanctions, also undermines the 3+3 cooperation model. To all this should be added intensifying competition in the fields of transit and energy. The Republic of Azerbaijan, Georgia, and Turkey have cooperated in these areas, to the exclusion of Russia and Iran. With all this in mind, we must face the fact that the path to regional cooperation in the Caucasus promises to be a bumpy one.