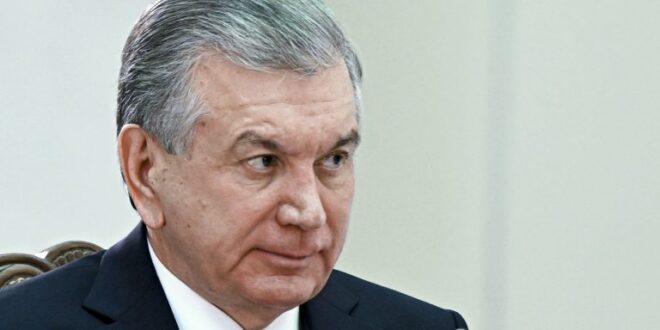 Uzbekistan has sought to engage the Taliban leadership in Afghanistan to ensure its cooperation against Islamist extremist opposition groups.

Uzbekistan’s leaders are not demanding that the Taliban include Afghan-Uzbek factions in its governing structure.

An extremist opposition group, the Islamic Movement of Uzbekistan (IMU), is an ally of Islamic State Khorasan Province (IS-K), which has sought to undermine Taliban rule in Afghanistan.

Tashkent views Afghanistan as a potential key trade route to the Indian Ocean.

Uzbekistan’s President Shavkat Mirziyoyev is pursuing consistent and unconditional engagement with the Taliban rulers in Afghanistan, opting to downplay the Taliban’s human rights abuses and their exclusion of ethnic Uzbek leaders from government. The August 2021 change of regime in Kabul significantly diminished Tashkent’s influence with its southern neighbor. Before the takeover, Abdul Rashid Dostam, a powerful ethnic Uzbek leader who was broadly representative of the Afghan-Uzbek community and served as First Vice President from 2014-2020, was an important advocate for Tashkent. In spite of, or perhaps because of, these setbacks, Mirziyoyev has chosen a pragmatic approach to relations with the Taliban, pursuing Uzbekistan’s national interests over principle. He has urged, but not insisted, that the Taliban form an inclusive government that presumably would include several prominent ethnic Uzbeks. Mirziyoyev has appointed a special envoy, Ismatullah Irgashev, as his chief liaison to the Taliban leadership in Kabul. Still, Uzbek officials insist that they will not formally recognize the Taliban government in Afghanistan before the international community is willing to do so. Mirziyoyev’s position contrasts sharply with that of neighboring Tajikistan, which has been a vocal opponent of the Taliban’s takeover and critic of the behavior and structure of its regime. Dushanbe has had only limited contact with the Taliban since its accession to power.

Taskhkent’s primary interest with the Taliban is to ensure the movement’s commitment to denying safe haven to anti-Tashkent Islamist extremist groups. The ruling elite in Uzbekistan still recall the February 1999 bombing of six government buildings in Tashkent, which nearly killed then President Islam Karimov. That attack, which killed 13 persons, was attributed to the Islamic Movement of Uzbekistan (IMU). At the time, the IMU was an affiliate of al-Qaeda, which was hosted in Afghanistan by the Taliban regime. In 2015, the group switched its affiliation to Islamic State (IS), which operates in Afghanistan as Islamic State Khorasan Province (IS-K). The IMU’s founders have been killed and the group’s level of activity against the Uzbek government has diminished in recent years, but both Tashkent and Kabul perceive a serious threat from IS-K. The group has sought to undermine Taliban authority by conducting bombings and other attacks, including against Taliban militia fighters and against mosques operated by Afghanistan’s Shia minority.

The sensitivity of Uzbekistan-Taliban cooperation became evident on April 18, 2022, when IS-K fighters claimed to have carried out a rocket attack on Uzbekistan from across the Afghanistan border—the first strike by the terrorist group against Uzbekistan. IS-K announced that the group fired 10 rockets at an Uzbek military base in the border town of Termez, which lies just across the border from the Afghan town of Hairatan. The group released a photo and video of the projectiles to back its claims, but Uzbek authorities did not immediately comment on the claims, and the Taliban denied that the attack took place at all. Taliban officials claimed that the situation on the border between the two countries “is normal and there is nothing to worry about.” That both Tashkent and Kabul downplayed the attack suggested that both governments sought to avoid further international criticism or scrutiny of the Taliban, and to forestall domestic criticism of the Uzbek government’s policy of engagement with the movement.

Countering anti-government groups is not the only common interest shared by the Taliban and the Uzbek government. Tashkent’s thinking is also colored by practical economic concerns, including potentially securing a trade route from the landlocked country through Afghanistan to Pakistani seaports on the Indian Ocean. Expanding its access to the Indian Ocean would help the Uzbek government address longstanding economic stagnation, caused by endemic corruption and the central economic planning process implemented by former President Karimov, who came up through the Soviet economic planning bureaucracy. In order to build the necessary international support to pursue these goals, Uzbekistan has sought to burnish its image by becoming a major hub for humanitarian aid destined for Afghanistan.

Despite such diplomatic engagement with the Afghan Taliban, Uzbekistan has been careful to avoid upsetting its relations with the United States and other key allies who seek to hold the Taliban accountable on human rights, counter-terrorism commitments, and other issues. U.S. officials have publicly expressed understanding for the reluctance of Uzbekistan’s leaders to clearly denounce Russia’s invasion of Ukraine, in light of the former Soviet republic’s concerns about Russia’s disregard for former Soviet states’ sovereignty. Afghan Air Force personnel flew nearly 50 combat aircraft and helicopters into Uzbekistan when the former Afghan government collapsed in August. Uzbekistan’s leaders have defied Taliban demands to return them to Afghanistan, asserting that the aircraft are the property of the United States, which insists that the aircraft not be returned to Afghanistan where they could augment the Taliban’s combat capabilities. Uzbek envoy Irgashev explained: “We’ve kept this military equipment in agreement with the U.S. and have told the Taliban so.” The pilots were transferred to the United Arab Emirates (UAE) in the fall of 2021 and are being resettled in the United States. The differences with the Taliban over the former government’s mostly U.S.-supplied aircraft notwithstanding, Tashkent will likely continue to work with the Taliban to pursue those issues on which the Taliban is willing and able to cooperate.

Post Views: 119
Previous Turkey has Long Been an Important Support Base for Islamic State
Next Iran Battles on Multiple Fronts