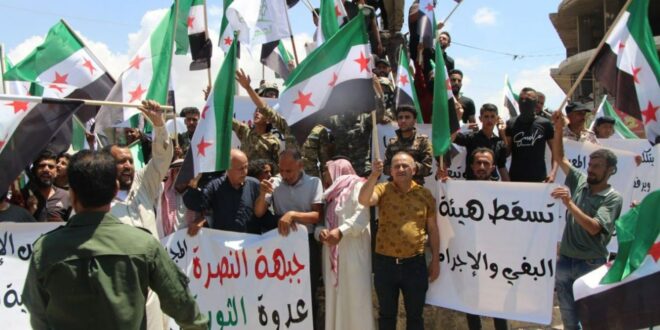 Demonstrators gathered on a street in the main city refusing to allow HTS forces and vehicles into the area, according to Enab Baladi.

The city of Afrin, north of Aleppo, witnessed a demonstration of dozens of people refusing to accept the powerful Tahrir al-Sham’s (HTS) entry from Idleb into areas of the Aleppo countryside.

On Tuesday, demonstrators gathered on a street in the main city refusing to allow HTS forces and vehicles into the area.

The demonstrations emerged after three days of clashes between components of the Turkish-backed Syrian National Army, after which HTS sent its troops and vehicles to the Aleppo countryside.

HTS offered the justified its intervention, claiming it was “preventing the area from being dragged into absurd rounds of infighting,” as well as “pressuring the relevant parties to understand and arbitrate with the language of reason, and away from the language of arms”.

Clashes took place on June 18th, and lasted for a day and a half between the Ahrar al-Sharqiya faction and the Third Corps (Levant Front) in the eastern Aleppo countryside.

The clashes resulted in deaths and injuries without an official toll. Several local networks reported the names of the dead and injured on both sides, with civilians also being included.

Several statements accompanied the clashes between the two opposing factions. The most notable statement was issued by the Islamic Council, which called on the Syrian National Army members to repel “aggression as a legitimate duty.” The statement referred to HTS and prohibited its military movement towards the areas under the Syria National Army’s control.

Clashes involving several villages and towns in the eastern Aleppo countryside have stopped as talks have accelerated about a future agreement to keep each faction in its headquarters and positions, according to sources close to the National Army. Meanwhile, HTS has announced the withdrawal of its forces.

Violations abound among the national army factions, some of which face accountability to the justice system. In other cases, the justice system is not present. An example of the latter is the lack of accountability for Mohammed al-Jassim (Abu Amsha), the deposed Commander of the Suleiman Shah Division. Abu Amsha has not been brought to justice since being convicted of several violations, found guilty of criminal levels of corruption, and removed from any “revolutionary” positions.