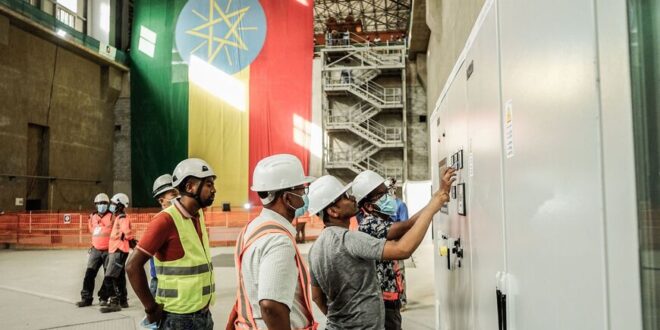 Speaking to Sada el-Balad TV June 12, Aboul Gheit said, “Ethiopia decided to strangle the downstream countries, Egypt and Sudan, and no one is countering it.”

He added, “It has been a year that we are seeing the Security Council with its unfortunate performance in the issue … and no one is talking about the right to transboundary waters.” He called for action by “those who want international law on international waters to be applied to everyone.”

Aboul Gheit’s remarks come as Addis Ababa is preparing for the third-stage filling of the dam’s reservoir, a move expected to heighten tensions with Cairo and Khartoum amid the stalled tripartite negotiations.

In September 2021, the Security Council issued a presidential statement urging Egypt, Ethiopia and Sudan to resume the African Union-led negotiations to reach a “mutually acceptable and binding agreement on the filling and operation of the GERD within a reasonable time frame.”

It also read, “The Security Council underscores that this statement does not set out any principles or precedent in any other transboundary water disputes.”

Ahmed Youssef Ahmed, a professor of political science at Cairo University and former head of the Institute of Arab Research and Studies, told Al-Monitor, “Aboul Gheit’s statements indicate that he acts in accordance with his national and Arab responsibilities and his position expresses the Arab League’s opinion on the international community’s failure to handle the GERD crisis.” He went on, “The international community’s neglect is due to the fact that some major countries have no interest in taking a decisive stance against Ethiopia on this file.”

He said, “The Arab League may be able to convince or pressure a number of Arab countries that have strong relations with Ethiopia to pressure it to reach a just solution with Egypt and Sudan. This approach is probably the most the Arab League can do. If it succeeds in doing so, that will be an important service done for Egypt and Sudan.”

In January 2021, the United Arab Emirates had offered to mediate between Egypt, Sudan and Ethiopia to facilitate an agreement on the GERD crisis, but the Emirati initiative did not bring about progress and was withdrawn in May.

Nevertheless, Ahmed said, “There are very important Arab investments in Ethiopia that can be used as a pressure card to persuade Addis Ababa to sit at the negotiating table.”

When asked which Arab countries he meant, Ahmed did not specify but said, “There are many Gulf countries investing in Ethiopia.”

Meanwhile, the trade exchange between Ethiopia and Saudi Arabia amounted to more than $577 million between 2015 and 2020, according to the Ethiopian Ministry of Trade and Industry.

Assistant Secretary-General of the Arab League Hossam Zaki said in an interview with Al-Ain June 17 that the GERD file “is of great interest not only for the secretariat of the Arab League, but also for the member states because it shows how upstream countries impose their conditions related to water resources on downstream countries,” a reference to Ethiopia and Egypt and Sudan, respectively.

He explained that the Arab League “is dealing with the issue calmly and away from the media and publicity, and the aim is to support the Egyptian and Sudanese position.”

Meanwhile, a June 21 Egyptian-Saudi statement followed a meeting between Saudi Crown Prince Mohammed bin Salman and President Abdel Fattah al-Sisi in Cairo. It read, “Saudi Arabia stressed its full support for the Egyptian water security as an integral part of Arab water security and urged Ethiopia to refrain from taking unilateral measures regarding the filling and operation of the GERD. Saudi Arabia also reiterated the importance of negotiating in good faith with Egypt and Sudan to reach a binding legal agreement in this regard.”

Ali al-Hanafi, former Egyptian deputy foreign minister for African affairs, told Al-Monitor, “The Arab League is trying to play a role in ending the GERD dispute within its area of competence. Aboul Gheit’s remarks are no surprise because he has an obligation to do so based on his current post, as we are facing a dispute between two member states of the Arab League versus an African state.”

The Arab League foreign ministers convened in mid-2021, during which the pan-Arab body stressed that Sudan’s and Egypt’s water security is an integral part of Arab national security and rejected any action or measure that would affect their rights in the Nile water.

Hanafi explained, “Aboul Gheit’s remarks are a message to several parties in the international community, including the Security Council and major countries such as the US, that it is necessary to take action and remove the obstacles to reactivate the negotiations between the three countries in the presence of international observers, and in a way that leads to an agreement satisfying to all parties.”

On June 10, Ethiopia declared its readiness to resume negotiations with Egypt and Sudan on the GERD. Cairo and Khartoum have not yet officially commented.