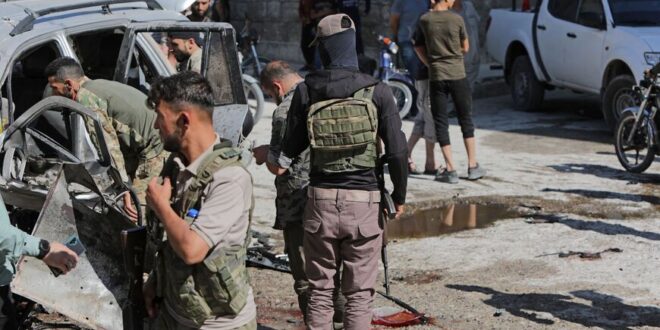 Hayat Tahrir al-Sham entered the areas under the control of Turkish-backed factions in the countryside of Aleppo.

Violent clashes erupted between the so-called 32nd Division affiliated with Ahrar al-Sham and the Third Legion, which is a merger of Turkish-backed factions, including the Levant Front and Jaish al-Islam, in the villages of Abla and Tal Battal on the outskirts of the city of al-Bab in the eastern countryside of Aleppo.

The two groups are affiliated with the Turkish-backed Syrian National Army (SNA).

The clashes came amid heightened tensions between the two parties after the 32nd Division-Eastern Sector defected from the Third Legion in early April.

Ahrar al-Sham’s 32nd Division-Eastern Sector, which is present in al-Bab under the control of Turkish-backed factions, is considered an ally of Hayat Tahrir al-Sham (HTS), which controls Idlib. Some SNA factions even accuse leaders of the 32nd Division-Eastern Sector of following the orders of HTS leader Abu Mohammed al-Golani, as they believe that HTS has been working since last year to enter their areas of control in north Syria known as the Olive Branch area (in reference to Turkey’s 2018 military operation).

Amid the fighting, the 32nd Division-Eastern Sector asked HTS for support. The latter entered Afrin in the Olive Branch area, which some factions considered proof of HTS’ intention to spread its control in the area.

The fighting in recent days led to military and civilian casualties on both sides, as well as to detention operations between the Third Legion and Ahrar al-Sham’s 32nd Division-Eastern Sector.

In light of the confrontations, HTS sent large convoys to areas in the town of Jandiris, close to the city of Afrin that is controlled by the Turkish-backed factions. Consequently, HTS took control of the Ghazawiya crossing separating its areas of control from those held by SNA factions, as well as of the villages of Muhammadiyah and Ain Dara, knowing that those are villages located within areas controlled by SNA factions.

Independent sources from Aleppo’s northern countryside and Idlib who spoke to Al-Monitor said that HTS threatened to continue its incursion should the Third Legion not withdraw from the villages that it controlled before they fell under the control of the 32nd Division-Eastern Sector.

Under pressure, the Third Legion withdrew from the Ahrar al-Sham-held areas and positions. This led Ahrar al-Sham to regain control of the villages of Awlan, Abla and Tal Battal.

In return, HTS withdrew from the area under the control of SNA factions under an agreement that was concluded between the fighting parties.

On June 19, the parties reached a Turkish-sponsored agreement to end the fighting, whereby the situation would go back to what existed before the June 18 clashes and all parties would return to their prior positions.

Of note, clashes had erupted in April between the Levant Front, the most prominent component of the Third Legion, and Ahrar al-Sham-Eastern Sector in the Olan village near the city of al-Bab, east of Aleppo.

Back to the recent confrontations, the Turkish-backed Syrian Islamic Council issued a statement on June 19, calling for confronting HTS: “The HTS’ military movement toward the areas of the Syrian National Army in the liberated north of Syria is tantamount to a rebellion, and this is absolutely forbidden under Sharia.”

HTS members “must neither be tyrants nor a part of this aggression,” the statement read.

For its part, HTS issued a statement saying that it has followed with great interest the internal fighting, which it described as “unfortunate.”

The HTS statement clarified that the internal fighting was “the result of wrong decisions” taken by the leadership of the Levant Front and Jaish al-Islam — two components of the Third Legion — against what it dubbed as “their former brothers and partners” (in reference to the 32nd Division-Eastern Sector of Ahrar al-Sham).

“As a result, the rebellious youth plunged into an absurd internal confrontation that led to harming peace and security in the liberated areas,” HTS’ statement added.

The statement continued: “The current reality does not bode well but rather portends destruction, and the residents of the faction-controlled areas suffer from the spread of corruption in society such as drugs, theft and violations of all kinds within service institutions.”

Hisham Skeif, an official in the public relations office of the Third Legion residing in the Aleppo countryside, told Al-Monitor, “In the beginning, the 32nd Division-Eastern Sector was part of the Third Legion, until a dispute arose with some members of the division. This led the two parties to resort to the National Reconciliation Committee to help resolve the dispute and address the issue of rights of each party. But after the decision of the committee was issued [in April], the 32nd Division rejected it and announced that it would go back to working under Ahrar al-Sham.”

He continued, “The move back then was followed by unwanted escalation. HTS has authoritarian ambitions and goals that have nothing to do with the Syrian revolution, let alone its project and legitimacy. There are attempts on the part of what was formerly known as Jabhat al-Nusra, and now HTS, to resort to all kinds of pretexts to penetrate into areas controlled by the factions.”

“We are not afraid of HTS. We have the ability, will, justifications and great popular support to prevent HTS from entering our areas,” Skeif added.

Muhammad al-Sukari, a researcher on Syrian affairs based in Gaziantep, Turkey, told Al-Monitor, “The recent confrontations showed once again the depth of the rift within the Syrian National Army, as it revealed the extent of the confusing and complex inter-alliances, which were reflected in the conflict within the Third Legion alone without the rest of the Syrian National Army. The 32nd Division-Eastern Sector’s alliance with HTS is a political and tactical security alliance, especially considering the size of HTS’ military mobilization. This prompts us to say that the level of trust within the Syrian National Army is very weak compared to the solid bond between HTS and Ahrar al-Sham’s 32nd Division. This is a model that may lead to new understandings and penetrations in favor of HTS.”

He stressed that the SNA is suffering a deep crisis exemplified by the internal divisions and disputes over interests. According to Sukari, this shows that the factional mentality is still present among the factions under the SNA, with each faction seeking its own interests.

“The clashes between the two parties have now ended through Turkish mediation. Each party returned to its positions prior to the fighting. We support any effort toward unifying all the elements of the revolution in all its forms,” Abu Saied said.

Meanwhile, Turkey has been threatening in the past weeks to launch a new military operation against Kurdish forces in north Syria, specifically in the towns of Tal Rifaat and Manbij in the Aleppo countryside, which are under the control of the Kurdish-led Syrian Democratic Forces (SDF). The possible operation is also expected to include areas east of the Euphrates.

Al-Monitor has learned from several sources that SNA leaders are urging the Turkish leadership to launch an operation against Kurdish forces in Tal Rifaat, from where the Kurds are launching their attacks against the factions near the city of Afrin, according to the SNA.