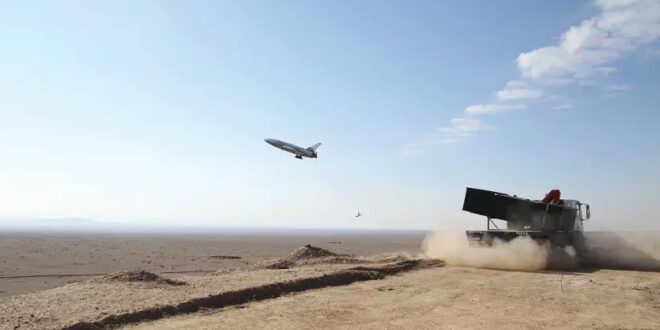 Iranian media also examined how the drone threat could lead to a naval conflict with Israel.

Hezbollah says the drone attack it launched on Saturday, in which three of its drones were shot down by Israel, accomplished the mission the organization intended. The statement appeared on Al-Mayadeen media, which is considered pro-Iran.

Iranian media has also examined how the drone threat could lead to a naval conflict with the Jewish state. Hezbollah says in the statement it sought to launch drones in the direction of the Karish gas platform.
The Iranian-Lebanese report

“The Islamic Resistance in Lebanon announces the launch of three unarmed drones in the direction of the ‘disputed area’ at the Karish field on reconnaissance missions,” said Al-Mayadeen.

The word “reconnaissance” here is apparently to distinguish from armed drones being used. Hezbollah has a large arsenal of drones it has developed over the last two decades with Iranian backing. Some of these have munitions packed into them, making them able to attack kamikaze–style. Others are designed to take photos or merely to harass.

“The drones accomplished the required mission and delivered the message,” Hezbollah said. The terrorist group also said the drones were of various sizes. Video published by the IDF shows Israel shooting them down. One appears to be a winged drone, similar to a Samad one that has been used by Iranian-backed groups in the region.

“Hezbollah had confirmed its readiness to take measures, including force, against Israeli gas drilling operations in the disputed offshore areas,” Al-Mayadeen said. The Lebanese reports say that the group’s leader Hassan Nasrallah has been upping his rhetoric against the “disputed” maritime area and Israel’s economic zone, including the gas platforms and exploration.

“Lebanon is facing a new phase, the conclusion of which is what happened, and the installation of a platform in the Karish gas field within three months by the British-Greek company constituted an attack on Lebanon and put it in a difficult situation,” Nasrallah said on June 9. He has warned that the terrorist group will take measures against the Jewish state.

“Any act that the enemy commits will have repercussions, not only strategic, but existential,” Nasrallah said. “What Israel will lose in any war is much greater than what Lebanon can lose.”