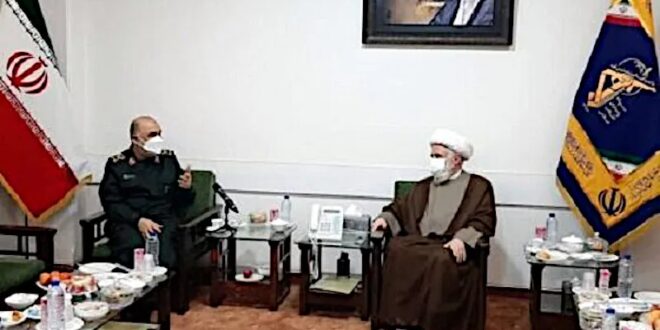 For more than four decades, the Iranian regime has been perfecting its strategies for infringing on the sovereignty of foreign nations. It exerts influence and interferes in other countries’ domestic affairs in order to advance its political, revolutionary and ideological interests.

This is part of the theocratic establishment’s core principle of exporting its revolution to other countries. As the Islamic Republic’s founding Supreme Leader Ayatollah Khomeini famously stated: “We shall export our revolution to the whole world. Until the cry, ‘There is no god but Allah’ resounds over the whole world, there will be struggle.”

The regime’s key mission is also incorporated in Iran’s constitution, which states: “The constitution provides the necessary basis for ensuring the continuation of the revolution at home and abroad. In particular, in the development of international relations, the constitution will strive with other Islamic and popular movements to prepare the way for the formation of a single world community.”

With the passing of time, the Iranian leaders have adjusted their strategy in order to accomplish their objectives. For example, soon after the ruling clerics took power in 1979, Khomeini began instigating the Iraqi people to rise up against the Baath Party and overthrow the government, even though Saddam Hussein had welcomed the Iranian revolution as he despised the shah. In one of his first speeches as supreme leader, Khomeini said: “Honorable people of Iraq. You are the descendants of those who drove Britain out of Iraq; rise up and cut off his criminal hand from your Islamic country before this corrupt regime destroys everything for you. O tribes of the Euphrates and Tigris. Unite all together and with all the nation and eradicate this root of corruption before the opportunity is lost.”

The eight-year Iran-Iraq War, which settled into a stalemate, taught the Iranian regime that direct, full-fledged wars are not the most effective way to exert influence in other nations and export the revolution, as Tehran does not have the military superiority to win such battles with other regional powers. The financial and human loss of the war was tremendous. As a result, the regime began investing its capital in asymmetrical warfare, which included training, sponsoring, arming and funding militia and terror groups in other countries that were willing to advance the political, religious and ideological interests of the Islamic Republic.

The regime deliberately incites and then exploits chaos and instability in other countries. For example, the Islamic Revolutionary Guard Corps and its elite branch, the Quds Force, infiltrated Lebanon and consolidated the Shiite militias there. This resulted in the creation of Hezbollah. In Iraq, Iran has sponsored a conglomerate of militias known as the Popular Mobilization Units. In Syria, the Iranian regime assembled a coalition of Shiite forces and militias that came from Iraq, Pakistan, Afghanistan and Lebanon. In Yemen, the Islamic Republic’s goal was to create a political reality out of the Houthis, just as it did with Hezbollah in Lebanon.

In some countries where the Iranian regime cannot set up militia or terror groups, it instead attempts to establish terror cells and hire assassins. Just last week, Turkey detained eight Iranians who were allegedly planning to assassinate Israelis. Turkey’s IHA news agency stated: “The hitmen in the assassination team, who settled in two separate rooms on the second and fourth floors of a hotel in Beyoglu, were (detained) with a large number of weapons and ammunition.” Israeli Foreign Minister Yair Lapid warned: “We’re not only talking about the murder of innocent Israeli tourists, but also a clear violation of Turkish sovereignty by Iranian terror.”

The regime has been increasingly relying on social media platforms to recruit spies. Iran has been trying to recruit agents through LinkedIn, Facebook and other websites, via email, through invitations to write papers and attend funded conferences, and by offering financial incentives. For example, Israel in January arrested several women who were reportedly recruited by an Iranian agent through Facebook. Israel’s internal security agency Shin Bet stated: “Despite the fact that the women suspected that the man in question was an Iranian intelligence operative, some of them maintained contact with him, agreed to perform various tasks he asked of them and received funds from him.”

Meanwhile, one of the regime’s own diplomats, Assadollah Assadi, was last year sentenced to 20 years in jail in Belgium over his role in a 2018 terrorist plot. Assadi reportedly delivered explosive materials to his accomplices with the aim of bombing an Iranian opposition rally in Paris, which I attended. Had the plot not been discovered at the very last minute, hundreds of people could have been killed, including international dignitaries and many European parliamentarians.

In a nutshell, aside from employing militia groups, the Islamic Republic has increasingly been using terror cells and social media platforms to recruit agents. Governments must take proportionate measures to counter the regime’s efforts.