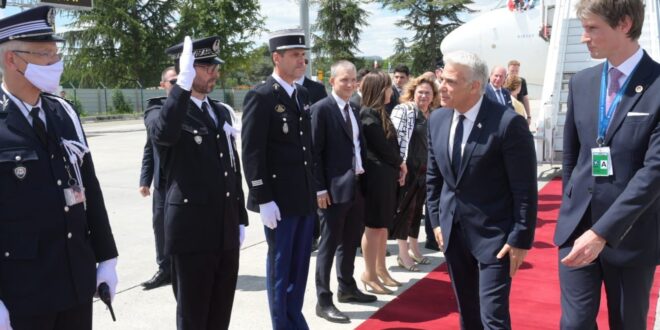 Israel’s Prime Minister Yair Lapid said he would discuss opposition to the Iran nuclear deal and attacks on Israeli gas fields emanating from Lebanon during a meeting with French President Emmanuel Macron while on a one-day visit to France. Lapid made the statement on Tuesday before boarding a plane to Paris, his first trip abroad as Israel’s prime minister.

Lapid also is scheduled to meet with French Prime Minister Élisabeth Borne. Lapid said a large impetus for his visit is the fact that France is one of the three countries – along with the United Kingdom and Germany – that is negotiating a revived nuclear deal with Iran. “It’s important that our opinion against this dangerous agreement and against Iran’s organizing and nuclearization be heard at this time,” Lapid said. “It’s also important that the international community knows that, on the Iranian nuclear issue, Israeli society stands together – as one body, with one position, presenting a unified position to the international community.”

Lapid also said that he would discuss repeated attacks from Lebanon on Israeli gas rigs in the Mediterranean Sea. “The government of Lebanon needs to restrain Hizbullah in the face of such attacks or we will be compelled to do so,” Lapid said on Tuesday, days after the Israeli military said it shot down three Hizbullah drones flying toward its Karish gas field, located in Israel’s international waters that Lebanon has laid claim to, which Hizbullah acknowledged launching. Lapid reportedly plans to ask Macron to tell Lebanon that Israel will not negotiate its maritime border while under threat from Hizbullah. A French statement announcing Lapid’s visit said the two leaders would discuss Russia’s war on Ukraine and its effect on food and energy security, the Iran nuclear talks, the Abraham Accords and the Palestinians, as well as bilateral ties between Israel and France, but did not mention Lebanon.