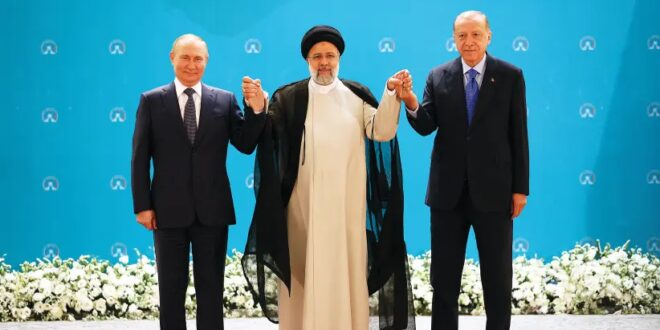 Russia has struggled in Ukraine, but everyone else has still lost

MIDDLE ISRAEL: Moscow’s strategic setbacks in Ukraine have yet to spell victory for anyone else.

Having listened to Nikolai Gogol read to him from his Dead Souls, which mocked feudal Russia through a plan to buy dead serfs’ souls, Alexander Pushkin at one point burst into laughter only to suddenly turn pensive and say in despair: “God, how sad our Russia is.”

Russia still is sad, especially since the fight it has picked with Ukraine and the West, and the list of the strategic blows it sustained is astonishing. Even so, the blows are not only Russia’s but everyone else’s as well, and they call for a sober definition of Western goals as the war enters its sixth month.

Russia’s failures are clear. Politically it failed to unseat Ukraine’s government, militarily it is humiliated, economically it is besieged, industrially its arms have proven inferior and diplomatically its adventurism resulted in NATO’s expansion to Sweden and Finland.

Russia’s strategic crisis became glaring this week, when President Vladimir Putin arrived in Tehran for a summit with the leaders of Turkey and Iran. So embattled did Putin emerge that he found himself seated between the Turk who sold Ukraine the drones that massacred his troops, and the ayatollah from whom he hopes to buy drones that will prove better than what Russia produced.

Such, in brief, is the hole into which Russia’s leaders have dug their country, and such is the face of their initial defeat. This doesn’t make any of this showdown’s other protagonists a victor.

THE WAR’S first non-winner is Ukraine. Yes, it has bravely fended off an invasion, but with thousands killed, millions displaced and entire towns leveled, its rehabilitation will take decades and cost billions.
The United States

The second non-winner is Uncle Sam. Yes, American resolve has been impressive, but, the effort to decide the war through sanctions is set to fail.

Western sanctions remained mainly Western. China, India, Indonesia and Brazil shunned the sanctions. That alone is nearly half of mankind. Add to that all of Africa and you get much of the rest.

Yes, the American-led financial sanctions make it difficult for Russians to borrow and spend dollars, euros and yens, but in terms of goods, whether raw materials or finished products, there is nothing Russia can’t buy abroad.

This is besides the fact that there is no raw material Russia does not possess and there is no important product its industry cannot produce. Is 22% inflation – which Russians now face – good for their economy? It isn’t, but compared with what their ancestors suffered in last century’s European wars it’s not even peanuts.

In short, the American-led sanctions on Russia, while economically painful, are politically ineffective. Russia’s economic resilience is evident in the currency markets where the ruble, which back when the conflict broke out plummeted from 74 to the dollar to 127, now sells at 56 to the dollar, a price that reflects brisk foreign trade, including sales of oil to China, fertilizers to Brazil and arms to India.

The Western strategic failure lurking beyond this is twofold. Diplomatically, the American-led effort to lay global siege to Russia has failed, thanks to a counter-effort led by China. And economically, China’s maturing counterweight to Western domination of global trade has been laid bare.
Europe

THE WAR’S third non-winner is Europe.

Yes, the clash with Russia made the continent display vitality, unity and a sense of purpose that many thought it had lost. However, the continent’s big test will arrive next winter, when the European Union’s refusal to buy Russia’s gas will make millions shiver, and possibly die.

That is when Moscow will skillfully try to use the crisis not to fully restore its exports – that will be its secondary aim – but to divide Europe.

Whether it ends up divided between idealists and pragmatists or between rich and poor, chances are high that winter’s demand for heating gas will crack Europe’s currently united front.

In the Kremlin’s thinking, that would be a far more valuable achievement than the billions that fully restored gas exports would pay. An even bigger bonus from a Russian viewpoint might emerge in the financial markets, where Southern European economies’ redoubled borrowing might restore last decade’s pressure on the euro, and the renewed prospect of its early death.

This is all besides the Ukraine war’s even bigger victim: the global economy.

Yes, post-Communist Russia has been an economic tragedy. Despite having millions of skilled engineers and scientists and a network of fine universities, Russia remained an economic laggard, as its leaders consciously chose to cultivate mining at the expense of manufacturing.

However, this still left much of the outer world dependent on Russian energy, grain and metals. Hence the inflation that now plagues the entire world, and the prospect of riots breaking out in poorer countries, especially in the Middle East.

Israel and the Jews

LASTLY, THE war’s non-victors include the Jewish people and its state.

Yes, fearing for the sizable Jewish populations on this conflict’s two sides, Jerusalem has done its best to remain above the war’s fray, at one point even mediating between the belligerents. Even so, the war’s ricochets are landing here, too.

This newspaper’s scoop about threats to the Jewish Agency’s activity in Russia is a throwback to the days when the Soviet Union persecuted its Jews. So is the newly squeaky Russian rhetoric following Israeli military operations in Syria.

The Russian bear, in short, is unhappy, and now threatens all of us.

Does all this mean that the West should surrender to Russia’s whim? It doesn’t. It does, however, mean that the aim should be Russian retreat, not Russian defeat. Least of all should the West think it can engineer the democratic revolution that Russia’s tragic management begs. That will only come from within, once the Kremlin convinces enough Russians to join Pushkin in saying “how sad our Russia is.”

Post Views: 157
Previous President Biden and Iran: the Cost of a Missed Opportunity
Next Ukraine can win