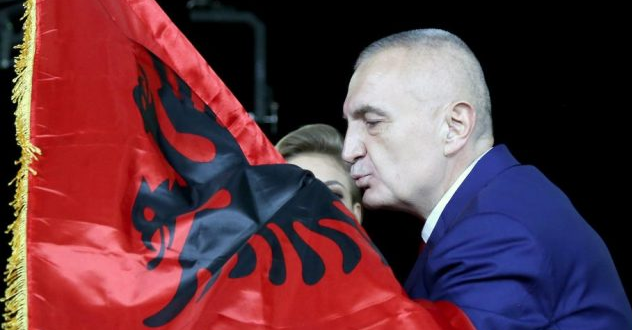 Albania’s former President Ilir Meta’s return to frontline politics did not come as a surprise to anyone, but some doubt that his newly rebranded party will be able to compete successfully with well-entrenched Prime Minister Edi Rama.

Aday after leaving the presidential office, Ilir Meta delivered a political comeback speech full of nationalist rhetoric at a convention of the party he founded in 2004, the Socialist Movement for Integration, SMI.

In his speech to the convention on Monday, Meta called for “patriotism” and urged Albanians not to “sell your vote” and betray the constitution. He also called for a referendum to change the current political system, although he didn’t give any details about his proposed plebiscite, and urged his supporters to “declare kleptocracy unwelcome” in Albania.

“Patriots go into all the battles that the country and history require. And there are battles that are not only worth losing, but worth fighting to the end. Worth dying for,” he declared.

Although Meta’s return to everyday politics had been expected because he organised protests against Prime Minister Edi Rama’s government in 2020 and was very politically active during the general elections last year, not everyone believes that he can bring real or constructive change to the political environment in the country.

Edlira Gjoni, a communications expert based in Tirana, told BIRN that she thinks he is making his comeback for “personal gain, not as an opposition for a healthier democracy in Albania”, a country whose political scene has long been dominated by Rama, and where splits in the opposition’s ranks have helped the prime minister strengthen his hold.

“Meta has had his chance since 2004 to prove us that he will bring about change. [It is] difficult to fool Albanian voters after a history of using power for personal gain in forming weird political coalitions with whatever side that brings him to power,” Gjoni told BIRN.

The party that Meta founded in 2004, the SMI, has now changed its name to the Freedom Party. Its leader, Meta’s wife Monika Kryemadhi, resigned on Monday. The party is now led by an organising committee, which is being run by Meta himself.

During his speech, Meta referred several times to the “people of March 2” – demonstrators who joined a mass protest in Tirana that he called against the government in 2020.

The protest was also against the presidency losing control over the swearing-in of judges, as the country tried to implement judicial reforms to satisfy EU demands. The rally had a strong nationalistic tone, and Meta threatened to sign a decree dissolving parliament because he considered it “illegal”, accusing the authorities of staging a coup with the judicial reforms.

It is now expected that Meta will collaborate with another opposition leader, Sali Berisha, who is running a faction of the divided main opposition party, the Democratic Party. Berisha has been sanctioned by the US and Britain over suspicions that he is involved in significant corruption.

The first sign of collaboration between Meta and Berisha came in March during by-elections in Albania when Berisha and his supporters teamed up with Meta’s SMI and established an election alliance called ‘House of Freedom’. In part thanks to their collaboration, Berisha was able to win one municipality.

The SMI has never governed the country, but has been part of important coalitions with the Socialist Party and the Democratic Party. In the last general election the SMI was able to take just four seats in the 140-seat parliament, compared with the 19 seats that it won in the previous general election.

Political journalist and analyst Lutfi Dervishi said that so far the SMI had only relied on the left-wing part of the electorate, but with its rebranding it will now try to appeal to the centre as well.

Dervishi thinks that this alone will not make Meta’s party a strong competitor, but it will be able to capitalise on growing social discontent.

“The biggest current problem for Rama is not the opposition, but the burden of government. Now [his party] is entering the tenth year of government. Governance problems, corruption scandals, price increases – they are the real enemy of the government,” Dervishi told BIRN.

“The opposition will try to make the most of the dissatisfaction with the increase in the price of fuel and everyday goods,” he added.

Meta was voted in as president of Albania in 2017 with the support of Rama’s Socialist Party, with which his SMI went into coalition after the elections in 2013.

However, relations between SMI and the Socialists deteriorated and later the SMI joined the Democratic Party in opposition – with Meta remaining as head of state.

The Socialists tried to dismiss Meta from the presidency twice while he was in office, once in 2019 for refusing to formally call local elections because there was an opposition boycott, and in 2021 for interfering in the general elections.

The Constitutional Court in 2022 ruled that he had not violated the constitution in 2021 as alleged by the Socialists. He stepped down as president on July 24.

A career politician who first entered parliament aged just 23, Meta has been one of the most active and controversial politicians of the last two decades.

In 1999, aged 30, he became prime minister for the first time. He was re-elected in 2001 but stepped down in early 2002 after a falling-out with then Socialist Party leader Fatos Nano.

In 2004, Meta’s wing of the party broke away from the Socialist Party to form the Socialist Movement for Integration. Though the SMI consistently trails behind Albania’s two big parties, the Socialists and the Democrats, it has repeatedly secured a slice of power by being in coalition with one or the other.

As leader of the SMI, Meta was in government with Rama from 2013 until he was voted in as president in 2017.

Praised by some as a wily political operator, Meta and his party have also faced accusations of nepotism and corruption.