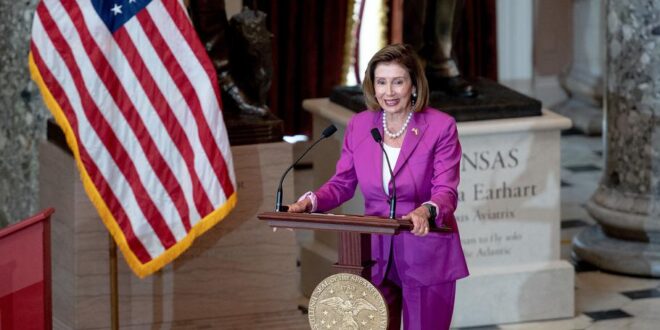 US ‘will not abandon’ its commitment to Taiwan, Pelosi says in Taipei

U.S. House Speaker Nancy Pelosi pledged her commitment to Taiwan on Wednesday as Chinese ships and aircraft ramped up their military activity in response to her visit.

“Now more than ever America’s solidarity with Taiwan is crucial,” said Pelosi, who departed Taiwan on Wednesday evening for South Korea. “Today our delegation, of which I’m very proud of, came to Taiwan to make it unequivocally clear we will not abandon our commitment to Taiwan, and we are proud of our enduring friendship.”

China held live-fire military exercises Saturday off its coast opposite Taiwan after warning Pelosi to cancel her visit. Ahead of her arrival on Tuesday night, Chinese aircraft and warships brushed up against the median line in the Taiwan Strait, an unofficial dividing line, according to Reuters.

Chinese J-20 stealth fighters took off from an airfield that evening to participate in the drills, the official Global Times reported Wednesday.

China also announced a series of naval exercises, to include live-fire drills, slated to run from Thursday to Sunday that will effectively surround the self-governing island, according to a Tuesday report from China’s state-run Xinhua News Agency.

China’s planned exercises effectively “amount to a sea and air blockade,” a Taiwan National Defense Ministry official told reporters after Pelosi’s ceremony with Tsai, according to the Washington Post.

The drills show that China seeks “a cross-strait resolution by force instead of peaceful means,” the ministry tweeted Wednesday.

“Activities around our territory are closely monitored by [the defense ministry] and will meet our appropriate responses when needed.”

Meanwhile, the U.S. Navy positioned the aircraft carrier USS Ronald Reagan with the cruiser USS Antietam and the destroyer USS Higgins as escorts near Taiwan, according to USNI News and Reuters.

U.S. Indo-Pacific Command on Wednesday referred questions about its Western Pacific operations to the Office of the Secretary of Defense, which did not answer a telephone call or immediately respond to an email.

Pelosi, the third-ranking member of the U.S. government, and a five-member congressional delegation arrived in Taipei on Tuesday night. Her highly anticipated visit to Taiwan is part of an Indo-Pacific tour that also includes stops in Singapore, Malaysia, South Korea and Japan.

In the days leading up to Pelosi’s arrival, Chinese authorities made clear that a military response of some kind could be expected.

“We are closely following the itinerary of Speaker Pelosi,” China Foreign Ministry spokeswoman Hua Chunying told reporters Tuesday. “And if the U.S. continues down the wrong path, we will take strong and resolute measures to protect our sovereignty and security interests.”

Beijing considers Taiwan a breakaway province that must be reunited with the mainland, by force if necessary. The U.S. government officially abides by the “One China” policy, which acknowledges Beijing’s view that it has sovereignty over Taiwan, which split from the mainland in 1949, but considers Taiwan’s status unsettled.

Assertive Chinese military activity has been taking place beyond Taiwan in the South China Sea, East China Sea and in the Pacific, said Ian Chong, an associate professor of political science at the National University of Singapore.

“There has also been a lot of military activity in Taiwan’s [air defense identification zone] for some time,” he told Stars and Stripes in an email Wednesday.

“The Pelosi visit did not cause, nor will it change,” China’s coercive military activities, Chong said.

China’s response to Pelosi’s visit may ultimately be indirect and deniable, New Zealand-based U.S. security expert Paul Buchanan said in a Wednesday email. China could potentially expel U.S. diplomats and attaches to protest the visit, but won’t go to war over it, he said.

“That does not mean that there will be no response or even no kinetic response from [China] … perhaps another island seizure or fishing fleet confrontation that may or may not involve the U.S. and Taiwan,” he said.