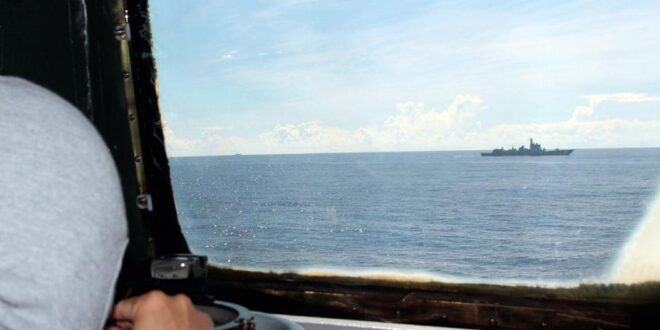 China on Monday continued its military exercises around Taiwan that were scheduled to end at noon the previous day, according to the Chinese Ministry of Defense.

The Eastern Theater Command “continued to conduct practical joint exercises in the sea and airspace around Taiwan Island, focusing on organizing joint anti-submarine and sea assault operations,” according to a terse notice posted on the ministry website. It did not specify where or for how long the drills would continue.

Spurred by U.S. House Speaker Nancy Pelosi’s visit to Taiwan on Wednesday, the Chinese military undertook four days of exercises, starting with the firing of 11 ballistic missiles, five of which impacted inside Japan’s maritime exclusive economic zone on Thursday. Four likely overflew Taiwan and one came down about 50 miles north-northwest of Yonaguni at the southwest end of the Ryukyu Island chain, according to Japan Today, which cited the Japan Defense Ministry on Friday.

On Sunday, “multiple bomber formations flew across the Taiwan Strait from north to south and from south to north, while several fighter jets conducted joint drills with destroyers and frigates,” according to China Military, an official online news site.

Beijing sent 66 aircraft and 14 warships into the area around Taiwan on Sunday; 22 aircraft crossed the median line in the 110-mile-wide Taiwan Strait, the unofficial boundary separating Taiwan and China, according to Taiwan’s official Central News Agency.

“The fact that the drills have continued beyond their scheduled end is abnormal. It shows that Beijing wants to deliver exceptional punishment to Taiwan in response to Speaker Pelosi’s visit,” said James Brown, an associate professor at Temple University, Japan Campus, in Tokyo.

“This was also evident in China’s decision to simulate bombing raids and missile attacks on Taiwan, as well as to fire ballistic missiles over Taiwan,” Brown said in an email Monday to Stars and Stripes. “Clearly, the longer and more intense these drills are, the more escalatory they become.”

Brown’s colleague, Jeff Kingston, a professor of history and Asian studies at Temple, agreed that China gave too much vent to the speaker’s visit.

“China has overreacted to the Pelosi visit and reinforced concerns about its regional ambitions, Kingston told Stars and Stripes in an email Monday. “Ironically, Pelosi seems to have greater influence over China than among Americans. Her gesture was provocative but could have been brushed off as of no great consequence.”

Brown said China aims to intimidate Taiwan and its partners to avoid a repeat of Pelosi’s visit. That threat is likely to backfire in the global competition between China and the United States, he said.

“On the one hand, you have a democratically elected politician making a peaceful visit to a fellow democracy,” Brown said. “On the other, you have an autocratic regime responding with threats of missile strikes and invasion. This situation makes it crystal clear to the global public which side is the aggressor here.”

“Taiwanese worry about the implications of the stifling of Hong Kong for their democracy but must take some encouragement that China’s belligerence is building greater support in Japan and the US and now NATO,” he wrote. “The question on many people’s mind is where do China’s aspirations stop? What is the next target for China’s glowering nationalism?”