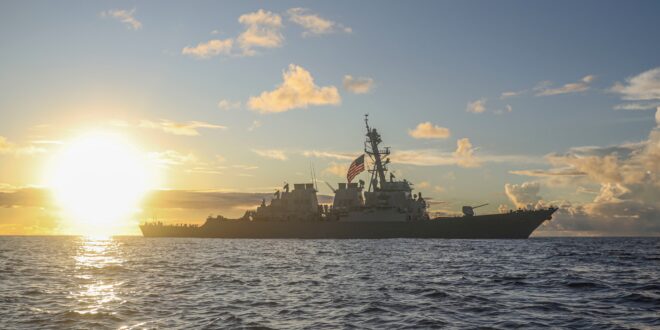 U.S. warships will continue to make Taiwan Strait transits and perform freedom of navigation operations in the Indo-Pacific despite the recent Chinese live fire drills, the undersecretary of defense for policy told reporters Monday.

The U.S. Navy is expected to conduct some freedom of navigation operations in the region in the coming days, Colin Kahl, undersecretary of defense for policy, said during a press briefing. It is important for Beijing to understand that the United States will continue to sail in international waters where it is allowed.

“We will continue to stand by our allies and partners. So even as China tries to kind of chip away at the status quo, our policy is to maintain the status quo with [a] free and open Indo-Pacific which frankly, is when I think most of the countries in the region would prefer,” Kahl said.

USS Ronald Reagan (CVN-76) and the amphibious assault ship USS Tripoli (LHA-7) have been in the area since Speaker of the House Nancy Pelosi (D-Calif.) visited Taiwan, sparking the tension between China and the U.S., USNI News previously reported. Both ships are currently in the Philippine Sea, according to USNI News’ Fleet Tracker.

“Legislatures from around the world go to Taiwan. Our Congress is an independent body of our government. Nothing about the visit and visit change one iota of the U.S. government’s policy toward Taiwan or towards China,” he said.