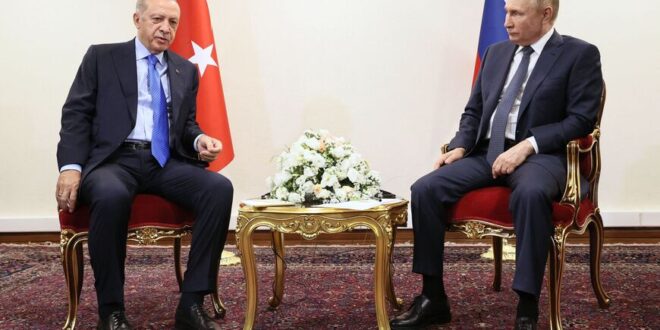 The economic outcomes of the recent Turkish-Russian summit and a string of financial moves by the Russian builder of a nuclear power plant in Turkey have come as fresh signs that Turkey is becoming a safe harbor for sanctions-hit Russian capital. For some observers, the moves amount also to a financial lifeline for Turkish President Recep Tayyip Erdogan as he grapples with economic turmoil ahead of crucial elections next year.

Money transfers by Rosatom, the state-owned Russian company building Turkey’s first nuclear power plant in Akkuyu; a deal allowing Turkey to pay in rubles for some of its Russian gas imports; and moves to expand the use of the Russian Mir payment system in Turkey are all seen as the pieces of an integrated effort between Ankara and Moscow.

According to experts monitoring Russian capital movements, flows to Turkey have increased since Russia’s invasion of Ukraine in February and the ensuing Western sanctions targeting the Russian economy. Many Russian companies have come to import goods from Europe via Turkey. The Turkish experience in trading in rubles, which dates back to the 1990s, when Turkey emerged as a hub of “suitcase trade” for Russians, facilitates mutual dealings.

In the first of a string of remarkable developments, Rosatom terminated the contract of its Turkish partner IC Ictas on July 26 and began wiring dollars to its subsidiary building the nuclear power plant in southern Turkey, formally known as Akkuyu Nuclear JSC. An initial transfer of about $5 billion was to be followed shortly with two similar sums, Bloomberg reported. A source close to the banking sector, however, told Al-Monitor that the initial transfer, made via Turkey’s public bank Ziraat, was of some $2.6 billion.

On July 28, Rosatom said it was seeking a credit line of $6.1 billion to finance the construction of the plant, including plans to put some of the money in Turkish sovereign bonds or bank deposits and then use them to buy equipment for the project. The company reportedly plans to use its subsidiary Atomenergoprom as the guarantor for the loan and pledge some Turkish dollar bonds to secure the credit line.

Then, Erdogan met with Russian President Vladimir Putin in Sochi on Aug. 5. The two sides signed an economic cooperation memorandum, including monetary arrangements, and agreed that Turkey would pay partially in rubles for Russian gas. That fell short of Erdogan’s desire to use both national currencies in bilateral trade. Al-Monitor has learned that Erdogan — faced with a foreign-currency crunch that keeps weakening the Turkish lira — proposed the deferral of gas payments or paying with treasury bonds, but Putin agreed only to partial ruble payments to alleviate his woes.

According to Erdogan, Turkey has made “very serious progress” in adopting the Russian payment system Mir — a relief for Russian tourists after Visa and Mastercard halted their services in Russia. Five Turkish banks are involved in the effort, he said after the talks in Sochi, where the two countries’ central bank governors also met. According to Turkey’s finance minister, 15% of enterprises in Turkey were using Mir as of April.

All those developments raise a number of poignant questions. Are Rosatom’s moves really turning Turkey into a safe haven for Russian capital? Are they the sign of efforts to circumvent sanctions? Could that trigger secondary sanctions against Turkey? Is Turkey’s ruble stock enough to cover the partial gas payments?

Ugur Gurses, a former Turkish central banker, sees the Rosatom-Akkuyu-dollar bonds triangle as a scheme to open parking room for Russian funds in Turkey. The recent increase in the central bank’s foreign and gold reserves — $108.1 billion on Aug. 4 from $98.9 billion on July 26 — has to do with Russian money flowing to Turkey, he told Al-Monitor.

According to the economist, “They are using the nuclear power plant project to park money in Turkey. The cancellation of IC Ictas’ contract was probably a prelude to opening the way for that. Transferring funds, then putting them in the Turkish treasury’s dollar bonds and then the talk of using those bonds as a guarantee to creditors are all pieces of this scheme.”

For Gurses, the moves are designed to keep banks away from the danger of sanctions, putting the onus on the Treasury instead. “Clearly, they see the sanctioning of the Treasury as highly unlikely. And I agree with that,” he said.

In other words, the nuclear power plant project is seen as the facade of a money-moving operation in which Russian funds are transferred by the way of Rosatom’s purchase of Turkish bonds instead of direct bank transfers.

Yet Gurses was doubtful if such a scheme could be sustainable and if the use of the ruble could reach the desired level. He predicted that the fear of secondary sanctions would deter Turkish companies and banks from dealing with Russians and the sums accumulated through the Mir payment system would be limited, thus Turkey would hardly reduce the pressure of its $38 billion trade gap with Russia. Things would have been much different had Russia accepted payments in Turkish liras — a prospect precluded by Turkey’s runaway inflation and battered currency, he said.

Aydin Sezer, a former trade attache at Turkey’s embassy in Moscow, believes Turkey is becoming a base for Russian business people. Rosatom’s call for credit bids is a major sign of an upcoming Russian capital flow to Turkey, he told Al-Monitor. “Akkuyu is just a front here. Rosatom, as a public company, has given the cue and others are likely to follow.”

Sezer noted that only some Russian banks had been barred from the international payment system Swift, which would facilitate things, and underscored the potential role of Turkish banks with branches in Russia, especially the state-owned Ziraat.

The latest bilateral deals are a two-way “financial cooperation operation,” according to Sezer. “Erdogan is the one who needs it the most. Putin has not turned him down and is [doing] him a favor,” he said. “In return, Turkey — by not heeding the embargoes — is helping the movement of capital, offering an important function as a bridge for goods to flow to Russia. It’s a win-win situation — a bit more advantageous to Turkey.”

Noting that Turkey had so far failed to cough up the funds to live up to its 49% stake in Akkuyu Nuclear JSC, Sezer said, “The Russians have been asking Turkey for capital for 12 years. Now Russia is meeting those needs itself. This is a big gesture.”

Yet the prospect of a government change next year might bear on the future of the project. According to Sezer, “Putin might make other gestures such as agreeing to defer gas payments or accepting payments in bonds to help Erdogan win in 2023.”

As for the ruble stock, Turkey is unlikely to face trouble, Sezer opined, noting an “incredible” inflow of rubles since the eruption of the Ukraine crisis. “That’s not an amount that could be explained with Mir or tourism revenues,” he said. “There is, of course, the suitcase trade, with people coming and buying goods with rubles. Beyond that, however, big Russian importers have begun to use Turkey as a base for operations in Western countries, and that’s why Turkey’s foreign trade volume has been growing. They bring in goods to Turkey using foreign currencies and then export them to Russia via their companies there, using rubles.”

Such dealings would ensure the continued inflow of rubles as long as the sanctions persist, Sezer said, adding that Turkish business people operating in Russia also received payments in rubles, albeit partially.

Gas payments in rubles will help Turkey reduce its foreign-currency demand, and the ruble stock will facilitate those payments, Sezer said. “How much of the gas will be paid for in rubles is not that important. Paying in rubles opens a new avenue beyond its material benefit — an avenue setting a precedent for bargaining other deals,” he added.

And the opening of that avenue reinforces the argument that Erdogan’s re-election in 2023 has become important for Moscow amid widespread concerns in Turkey over growing dependency on Russia.